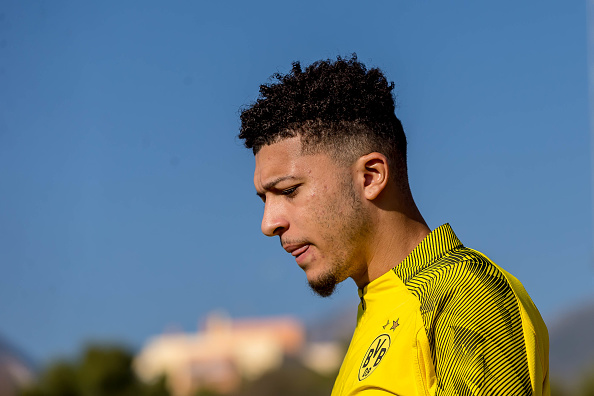 Manchester United are confident of beating Premier League rivals Chelsea to a stunning £120million transfer deal for Jadon Sancho, according to reports.

Sancho, 19, is rated as one of the most talented young players in world football and has impressed for Borussia Dortmund and England over the past three years.

The teenage winger left Manchester City to join Dortmund in 2017 and has since played 84 times for the Bundesliga club, scoring 29 goals and twice for Gareth Southgate’s England.

Despite flourishing in Germany, Sancho is expected to leave Borussia Dortmund at the end of the season, with the club ready to cash in on one of the most coveted players in Europe.

Chelsea have been heavily linked with a move for the teenager and Frank Lampard is keen to strengthen his attacking options with both Willian and Pedro potentially leaving Stamford Bridge.

But Manchester United want to beat their Premier League rivals to a stunning deal worth over £100m and believe Sancho will be heading to Old Trafford, according to the Daily Mirror.

It is claimed the Red Devils believe they are in pole position to sign Sancho in the summer because of their strong relationship with Dortmund.

Ed Woodward signed Portuguese midfielder Bruno Fernandes for an initial £47m in January and is ready to back Ole Gunnar Solskjaer again at the end of the season.

Sancho, who will be a key player for England at Euro 2020, is said to be open to a return to the Premier League, while Dortmund have begun the search for his replacement.

Discussing Manchester United’s plans for the summer transfer window, Woodward said this week: ‘As part of the rebuild we see this coming summer as an important opportunity.

‘There has been no shortage of investment in players over the past few years, with over £200 million spent since Ole became manager.

‘Our aim is to ensure that we continue to achieve consistency in quality of recruitment.

‘The recruitment department is working to a clear plan and philosophy, along with Ole and his coaching staff.

‘Our focus is on bringing in a combination of experience and the best young players with potential to develop further, fusing graduates from our academy with high-quality acquisitions.’

Manchester United, who are currently eighth in the Premier League, face top-rivals Chelsea on Monday night.