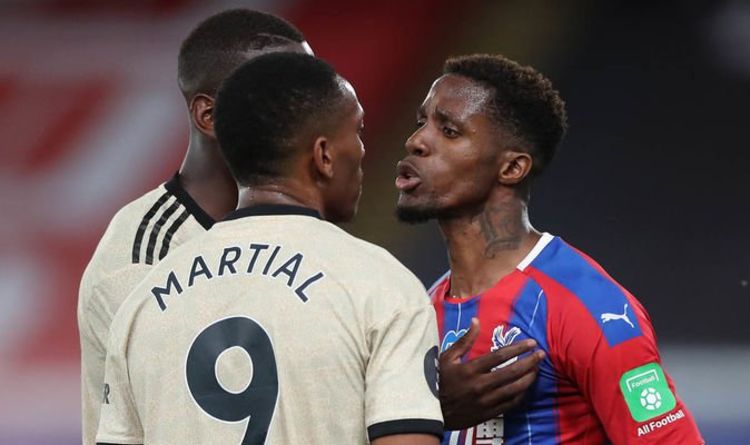 Manchester United star Anthony Martial fronted up to Crystal Palace’s Wilfried Zaha in the club’s 2-0 win on Thursday night. Zaha was furious with Marcus Rashford during the showdown. But Martial backed his team-mate – and fans on social media are loving it.

Both Rashford and Martial scored as Manchester United boosted their hopes of a top four Premier Leafue finish with a 2-0 win over Crystal Palace.

And, during the showdown, Zaha was enraged.

The Palace winger rounded on Rashford, pushing the United star after the duo became entangled while competing for the ball.

Yet Martial stepped up to protect his team-mate, with Paul Pogba also coming to Rashford’s aid.

And United fans on social media have responded positively to the incident, with one saying: “Love this from Martial, coming over to protect Rashford, but also not showing immaturity to get sent off, which can happen in the heat of the moment.

“This team is definitely the most likeable and team like unit we’ve had since 2013.”

Meanwhile, United legend Phil Neville has expressed a belief that Rashford, Martial and Mason Greenwood are the best front three in the entire Premier League.

The trio have all been in fine fettle this season, helping to fill the void left behind by the departures of Alexis Sanchez and Romelu Lukaku.

“I looked at it at the start of the lockdown and thought ‘what areas do United need to invest in to close the gap to Man City and Liverpool?” he said.

“Straight away I thought of the centre-forward [position].

“But them [sic] two are now causing Ole that big of a problem.

“They’re the best three – with Greenwood – in the league, up there with the Liverpool front three and the City front three.

“I think they have the ability to interchange positions and link with each other.

Solskjaer was happy with Martial and Rashford’s goals against Palace, saying: “The goals with Marcus and Anthony were just a joy to watch.

“We’ve created chances, scored more goals. We last the game, so you can see towards the end we’re fitter and stronger.

“The last 20, 25 minutes were the best ones for us – before then it took some time to get going, but I’m very happy.”