Wales moved a step closer to reaching their first World Cup Finals since 1958 after securing a win over 10-man Finland that also sealed promotion to the top tier of the Nations League.

Goals from Harry Wilson, Dan James and substitute Kieffer Moore ensured Wales finished first in their group, meaning they will compete against elite sides in League A in the next edition of the Nations League.

More importantly, the result means they are likely to have a two-leg play-off – if required – to reach Qatar 2022 if they do not qualify directly from their group. 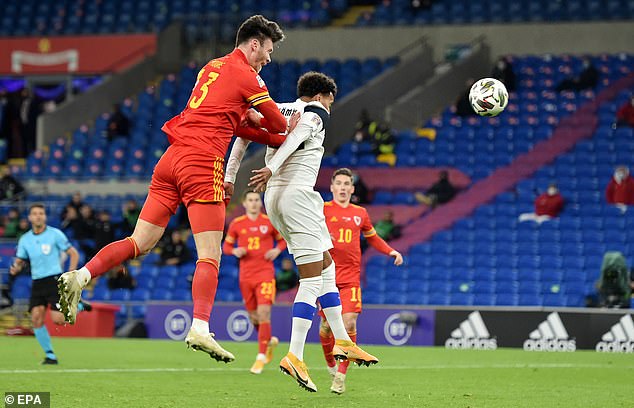 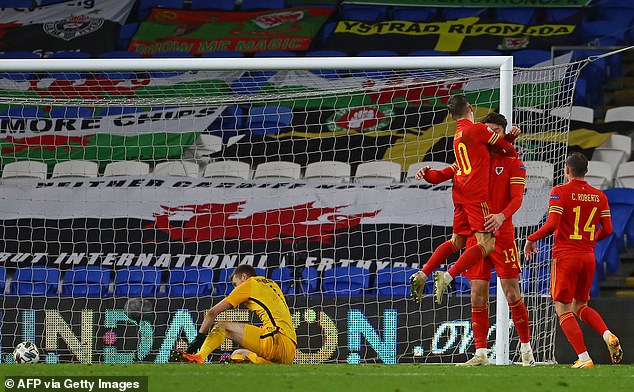 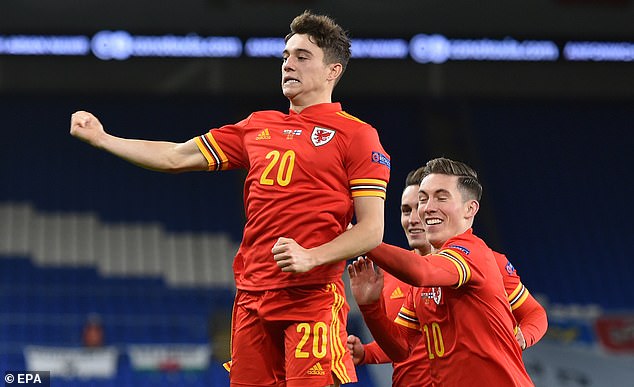 Teemu Pukki was on target for Finland to briefly make it 2-1 but the visitors were severely hampered by the sending-off of defender Jere Uronen with only 12 minutes on the clock. Wales captain Gareth Bale was taken off after an hour after an influential display.

After Uronen had fouled him as the last man, Wilson then opened the scoring by firing in Bale’s pass. James made it two just after half-time with a glorious 25-yard effort before Pukki scored the first goal Wales have conceded in nearly 800 minutes of competitive football.

Danny Ward made a fine save to deny Finland substitute Nicholas Hamalainen before Wales sealed it when Moore headed in James’s cross.

With Rob Page in charge after Ryan Giggs – who denies an allegation of assault made against him – stepped aside for these three matches, Wales again started without an orthodox centre-forward. This time Wilson was preferred to David Brooks in the middle of the front three, with James on the right and Bale on the left. 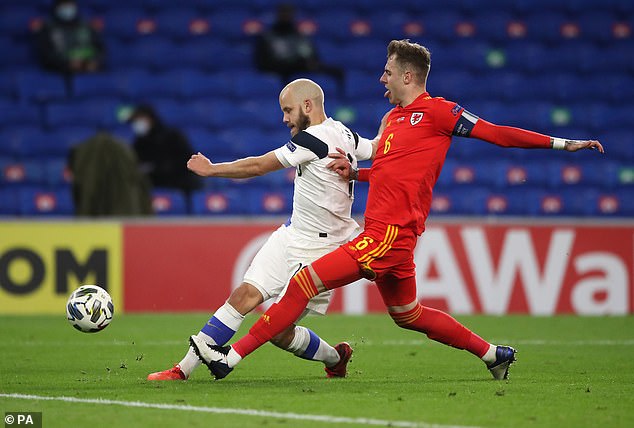 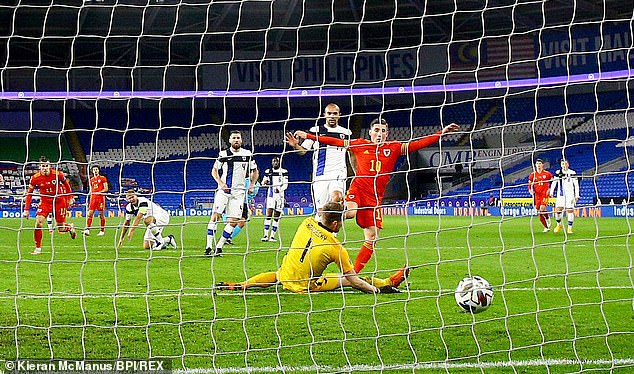 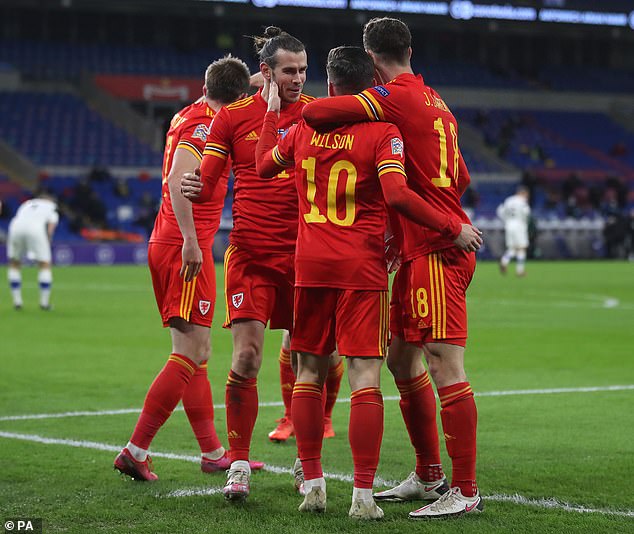 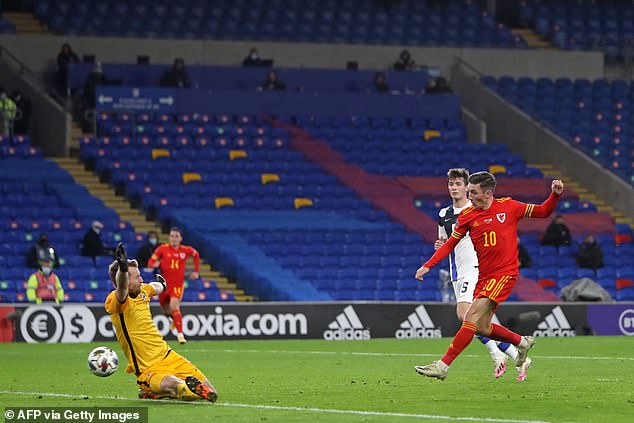 Bale might have put Wales in front in the fifth minute when Daniel O’Shaughnessy’s awful backpass fell straight to him, but the skipper’s powerful shot was saved at the near post.

Wales’ task was made considerably easier seven minutes later. Running on to a long kick from Ward, Wilson found himself on the wrong side of Uronen and was dragged down as he tried to run clear. Uronen was shown a straight red card.

Despite the setback, Finland should have taken the lead soon afterwards when Robin Lod’s corner found O’Shaughnessy unmarked at the far post, only for the defender to mishit his volley against team-mate Pukki.

That was the signal for Wales to step it up a gear. In the 23rd minute, Rhys Norrington-Davies’ cross from the left almost crept in at the far post, and only a brilliant save from Lukas Hradecky denied Bale as he slid on to James’ cross six yards out. 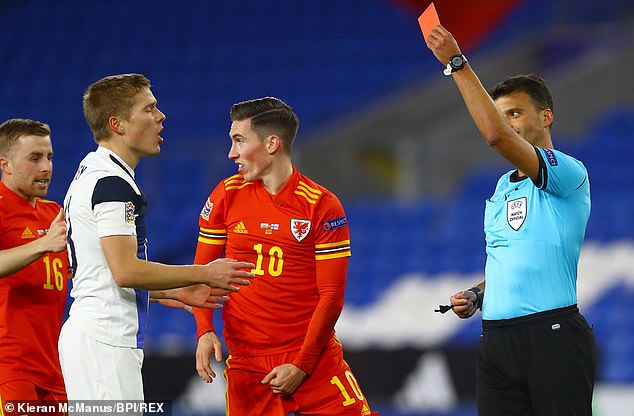 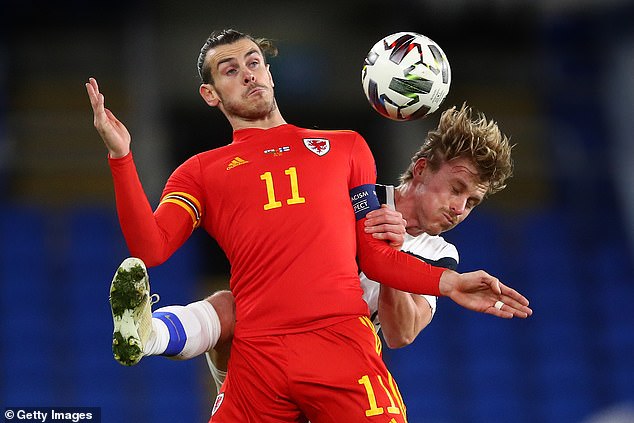 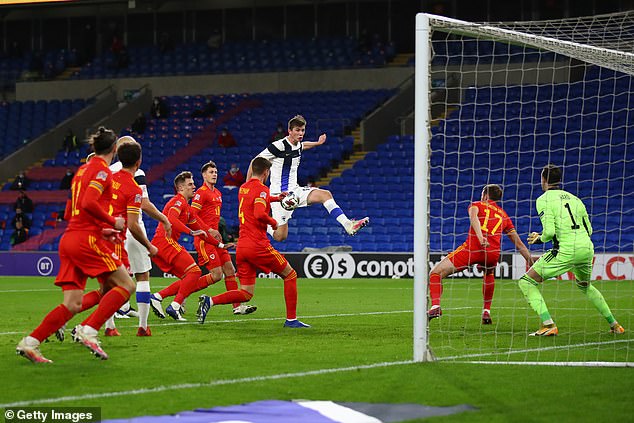 Bale’s frustration did not last, however. Collecting a lucky ricochet after a poor first touch, the on-loan Tottenham man played a ball of ideal weight to Wilson, who was left onside and produced a tidy finish beyond Hradecky.

If that goal was well-crafted, then the second was spectacular. Less than a minute after half-time, Joe Morrell won the ball in midfield and found James close to the edge of the box.

The Manchester United man was allowed to take two touches before finding the top corner with a ferocious strike from 25 yards.

Wales were starting to make the extra man count. By now Kieffer Moore had been introduced up front and Bale again went close with a right-foot effort that was kept out by Hradecky.

But Finland remained an occasional threat on the counter-attack and Joe Rodon did well to take the venom from Pukki’s goalbound shot after Lod had sent him through. 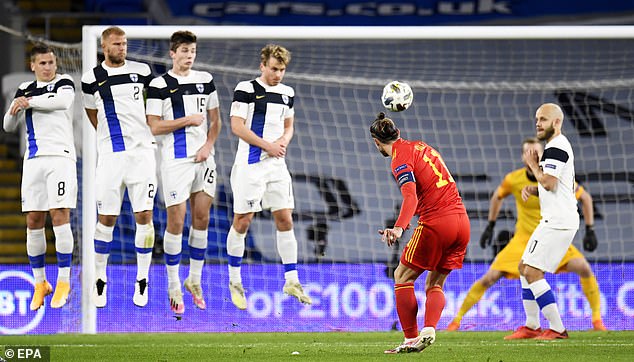 And the pair combined again just after the hour mark to bring Finland back into the match. Rodon misjudged the flight of Lod’s angled pass and let in Pukki, who shot crisply across Ward from 12 yards.

Suddenly, Wales were wobbling. Ward made an excellent stop from Hamalainen and Joona Toivio volleyed just wide after the home side dealt poorly with a high ball into their box.

Lod was causing more and more problems for Wales but to their relief, they restored their two-goal cushion when Wilson clipped a perfect ball to the far post for Moore to head home.

There was still time for Pukki to hit the outside of the post but Wales were not to be denied.