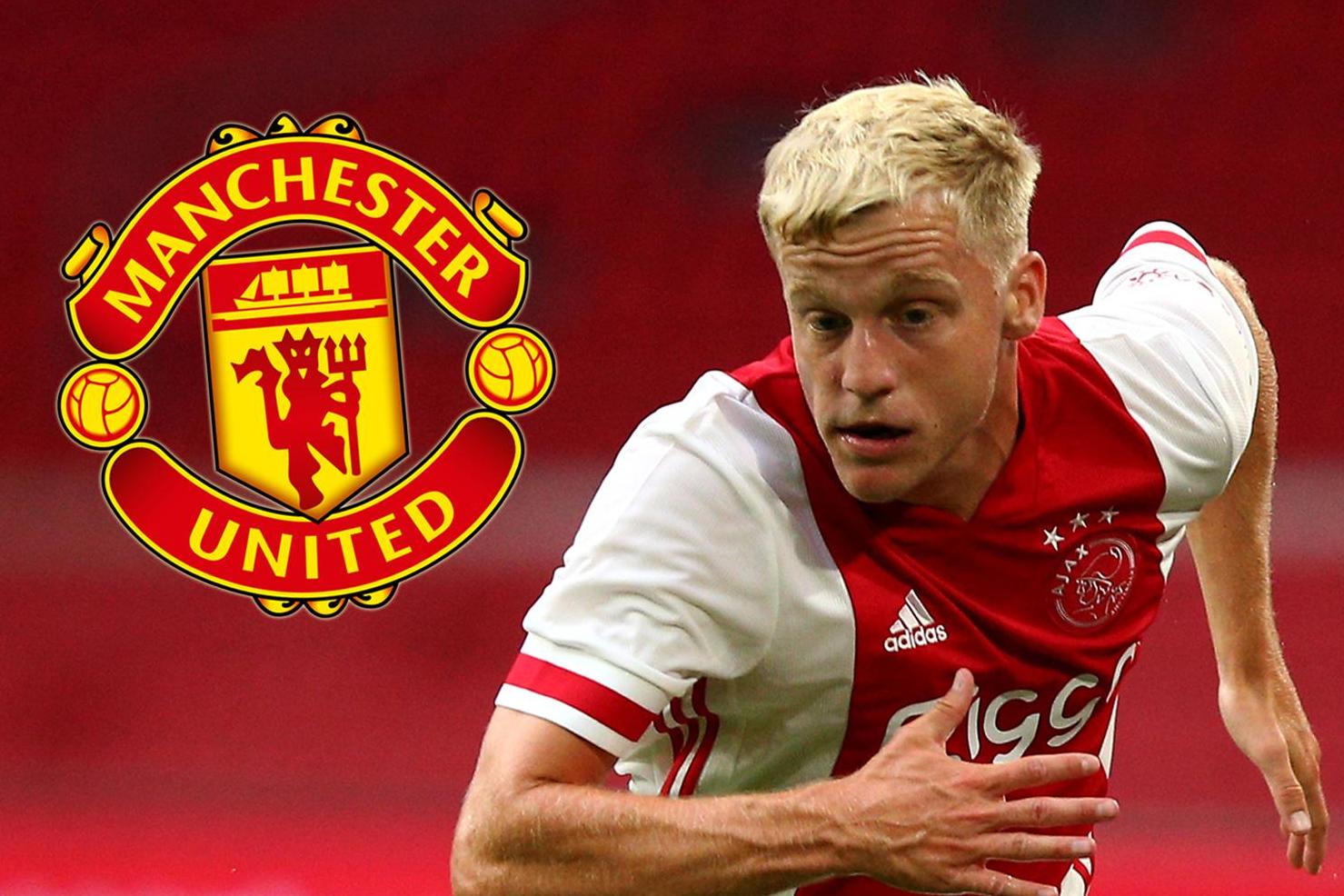 Manchester United continue to work on a deal for Jadon Sancho though Donny van de Beek looks like an easier deal, and Tottenham have signed Pierre-Emile Hojbjerg, Joe Hart and Matt Doherty.

Donny van de Beek increasingly looks to be on his way to Manchester United.

The Guardian, along with Fabrizio Romano, are reporting that United are ‘hopeful’ of signing the Ajax playmaker, and believe there is a ‘good chance’ of completing a deal.

Real Madrid and Barcelona have also been interested in the 23-year-old, but recent reports suggest Ole Gunnar Solskjaer has gotten involved to try and convince Van de Beek.

Here’s the exact wording of LaLiga’s declaration that they would only recognise Lionel Messi’s Barcelona exit if his release clause – believed to be in the region of £625million – is paid.

“In compliance with the applicable regulations, and following the corresponding procedure in these cases, LaLiga will not carry out the prior visa process for the player to be removed from the federation if they have not previously paid the amount of said clause.”

“United have been interested in Van de Beek since January when they first considered a move. They’ve kept tabs ever since. He’s seen as ticking all the right boxes. Would fit Solskjaer’s vision.”

The Spanish league made its first public remarks on the case on Sunday, releasing a statement that said that Messi’s contract is currently valid and can only be terminated with the payment of its buyout clause.

A big setback for Messi if that is the case…

Amadou Diawara’s name has been doing the rounds recently, with the 23-year-old AS Roma midfielder linked to Arsenal in a possible swap deal involving Lucas Torreira.

Diawara’s agent, Daniele Piraino, now claims Arsenal are interested, but the midfielder remains focused on AS Roma as it stands.

“He is concentrated on his career,” Piraino, told Tuttomercatoweb. “Diawara is at a top club like Roma, where he is happy, as there is enthusiasm around the new owners. However, he is also liked by many clubs in England, including Arsenal.

“Being linked with certain clubs is pleasing for him, as these are prestigious sides. Amadou is concentrated on football and his career.”

While Thiago Alcantara may be on his way out of Bayern Munich, compatriot Javi Martinez may also follow.

Rummenigge said of the defender/midfielder: “Javi thinks about leaving us. It will be difficult for him now, too.

“His contract is still valid for one year and we have given him to understand that we are not going to put any obstacles in his way.”

Bayern Munich are waiting for Liverpool to match their €30m valuation of Thiago Alcantara – but they will not wait forever.

Karl-Heinz Rummenigge, the CEO of the Bundesliga champions, told Welt am Sonntag of the Spanish midfielder’s future: “It looks like he will leave us. It was important for him that he showed that he can play well in the big games.

“When it comes to that, it’s a finish that hurts a bit. I expect an offer for him in the next few days.”

Respected journalist Fabrizio Romano has followed that up by stating that if Liverpool do not pay up, Thiago is also available for other clubs at that price – so things could get interesting…

While Lionel Messi appears to be edging himself closer to a move, his best friend left at Barcelona, Luis Suarez, attended the club’s PCR testing today.

Suarez believes he has been treated badly by Barca after his years of service, though it appears he is willing to move on should the club pay the remaining year of his salary.

Given there appears to be a reasonable chance of both parties finding a solution, it was no surprise to see him in attendance today – even if he isn’t part of Ronald Koeman’s plans.

Lionel Messi did not attend his PCR test with Barcelona today, according to Marca.

Reuters footage showed players arriving for coronavirus tests on Sunday morning, and Messi did not appear.

He had been due at Barcelona’s training ground at 9:15am BST. Players had been given staggered appointments throughout the morning until midday.

Here’s a shot of new head coach Ronald Koeman arriving for his medical – not exactly the start he’s been hoping for, you’d imagine!

“I’m very proud to be joining such a big club,” Doherty said.

“My time at Wolves was fantastic, I haven’t got a bad word to say about the whole club at all.”

Here’s the first picture of Matt Doherty at Tottenham…

Tottenham have completed the signing of Matt Doherty from Wolves.

According to early reports from Spain, Lionel Messi has NOT shown up for his PCR test today.

At the very least, that will put pressure on Barcelona as to whether they decide to take the nuclear option of considering sanctions against Messi for not showing up.

That would be extremely unlikely, but club president Josep Maria Bartomeu will be feeling the heat today.

Zlatan Ibrahimovic is back in Italy and ready to sign a new contract with AC Milan.

“Finally everything is in place and finally I can return to where I feel at home,” Ibrahimovic said upon his arrival at Milan’s Linate airport late Saturday.

The 38-year-old Ibrahimovic is expected to sign a one-season deal worth €7m. Ibrahimovic began his second stint with Milan in January on a six-month contract and helped turn the Rossoneri’s season around with 10 goals in 18 Serie A matches.

“As I’ve always said, I’m not here to be a mascot. I’m here to bring results and to help the team, the coach and the squad return to where Milan should be,” Ibrahimovic said in a video on Milan’s website.

“We had a great last six months but we haven’t won anything,” he added. “This year I’ve got the chance to be here from the start so we’ve got to continue like we were, working hard and sacrificing ourselves to reach our goals.”

Juventus have signed US international midfielder Weston McKennie on a one-season loan from German club Schalke with an option to buy at the end of the campaign.

The Turin club, who sealed a ninth straight Serie A title last month, will pay €4.5m for the loan period and up to €25.5m more if they decide to make the move permanent.

The versatile 22-year-old started his career in the youth system at FC Dallas before moving to the Schalke academy as a teenager, going on to score five goals in 91 appearances for the Bundesliga side.

“The agreement we have made with Juventus is the most financially beneficial for Schalke and the most attractive sporting move for Weston,” Schalke’s Head of Sport Jochen Schneider said.

“Obviously deciding to let go one of our most talented players like Weston is partly down to the financial state the club is in.”

The mess that is Lionel Messi’s potential exit from Barcelona will not stop just because it’s a Sunday – quite the opposite, in fact.

According to Marca, Messi – who is determined to leave Barca this summer – will not turn up for the club’s coronavirus testing today ahead of the start of pre-season training on Monday.

This would apparently be a ‘surprise’ to Barca, though it could be key within the context of his contract dispute.

Messi intends to leave Barca for free given he believes he is able to activate a clause in his contract which allows him to inform the club at the end of each season that he intends to leave – a clause which Barca believe was only active until May 30.

It may be that should Messi begin the process of preparing for the new season in any capacity, Barca could legally argue that is proof that the timeframe of the clause has passed – so the game of cat and mouse continues…

Arsenal beat a host of rivals to land Lille centre-back Gabriel Magalhaes, and they are expected to announce the 22-year-old’s arrival very soon.

Given the Gunners are celebrating yesterday’s Community Shield win, you’d expect to see a tweet from their official account sometime on Monday morning – but that doesn’t mean it won’t happen today either…

Barcelona are open to sending Samuel Umtiti on loan, according to Mundo Deportivo, who claim the Spanish giants are struggling to find a buyer for the center-back.

The Catalan side are set for a major squad overhaul this summer following the arrival of Ronald Koeman, with Barcelona putting all-but seven first-team players up for sale.

Umtiti has been linked with a number of clubs, including West Ham, Leicester, Arsenal and Tottenham, Roma and Lazio, though no offers have yet been made.

Is Aubameyang staying at Arsenal?

Pierre-Emerick Aubameyang played a key role in Arsenal’s Community Shield win over Liverpool yesterday, as he did against Chelsea in the FA Cup on August 1.

But just like that Wembley triumph, the post-match was dominated by questions about the skipper’s future as well as his performance.

Aubameyang was coy about negotiations – “We are going to see…today we will just take the trophy and that is it,” he told BT Sport – but Arteta is confident an agreement is close.

“I keep saying the same thing,” the Arsenal boss said. “I try do my job, which is convince him that he is in the right place, that he has the environment here to produce the moments like he’s done today and he’s done here three weeks ago.

“I am very positive that he’s going to sign but a lot of time there’s a lot of things involved in a contract deal and we are trying to show him.

Bayern Munich playmaker Tiago Alcantara is wanted by Liverpool – and in normal circumstances, he would likely already be at Anfield. However, Covid-19 has hit Liverpool’s transfer budget, and that means Bayern’s €30m is a tough sell for the Reds considering the midfielder is available for free in a year.

Fabrizio Romano says that Thiago is current “… waiting because he strongly wants to move to Premier League this summer.” However, he also states that Bayern reiterated their €30m asking price only two days ago, so it would now appear to be up to Liverpool as to whether they decide to bite the bullet and land the Spain international.