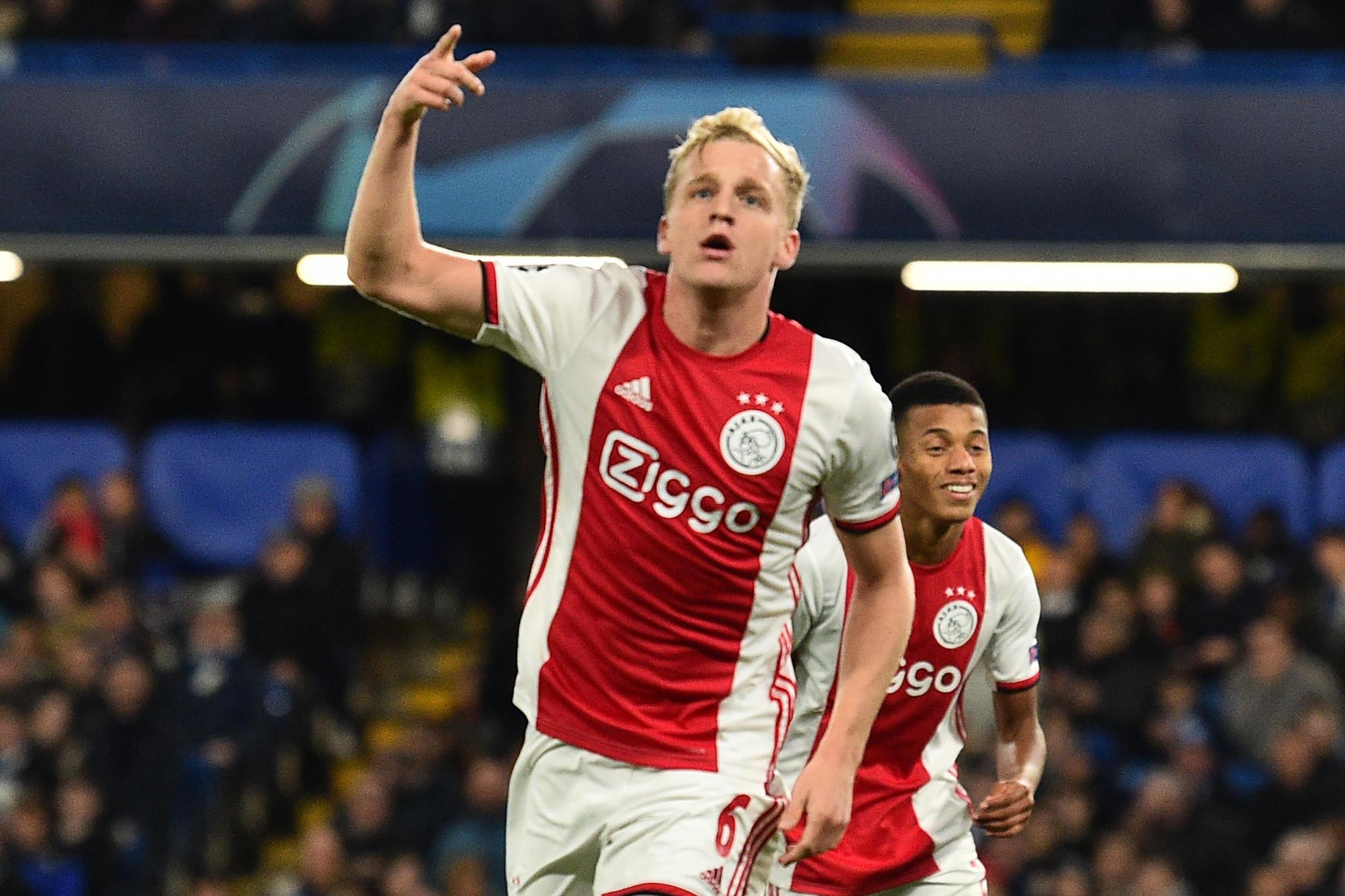 Manchester United continue to work on a deal for Jadon Sancho with Donny van de Beek set to join in a £40m deal, and Tottenham have signed Pierre-Emile Hojbjerg, Joe Hart and Matt Doherty.

A potentially key development in the Kai Havertz to Chelsea saga.

Bild report that the German playmaker was NOT involved in pre-season fitness testing with Bayer Leverkusen on Sunday.

Standard Sport understands that Chelsea are close to agreeing an initial £70m deal for Havertz that would include further add-ons potentially worth in excess of £15m.

Leverkusen are due to train later today, so it will be fascinating to see if Havertz is absent again…

Manchester United are set to seal the signing of Donny van de Beek.

Standard Sport understands that a fee of £40m has been agreed with Ajax for the Dutch international midfielder, who will become Ole Gunnar Solskjaer’s first summer signing at Old Trafford.

Talks progressed significantly over the weekend, with United having tracked Van de Beek – a former target for Real Madrid – since the January transfer window.

Fulham have held further talks with Benfica over a proposed summer move for Florentino Luis, according to the Daily Mail.

The newly-promoted Premier League side have reportedly offered a fee of £2million to take the midfielder on loan with a £25million option to buy.

Meanwhile, the Cottagers have sealed two swift signings with Harrison Reed on a permanent deal and Mario Lemina on loan.

Southampton have opened talks with prolific forward Danny Ings over a new long-term contract, according to the Daily Mail.

Ings has been recalled to Gareth Southgate’s England squad after a stunning season, in which he scored 22 Premier League goals.

The forward has two years remaining on his Saints deal, with no agreement reached as of yet.

Southampton are looking to provide the striker with a bumper new deal, however.

Antonio Conte has asked Inter Milan to raid his former club Chelsea to sign N’Golo Kante, according to Tuttomercatoweb.

The former Chelsea boss reportedly is keen to sign the Frenchman on loan with a view to a £44.5million permanent move.

Chelsea signed Kante from Leicester in 2016 while Conte was in charge.

Roberto Mancini has ruled out the possibility of leaving his post as Italy manager.

The former Manchester City manager has been linked with a return to the Premier League, with reports in Italy claiming he’s been contacted by a number of teams.

Mancini is determined to succeed with Italy in next summer’s European Championships, however.

“My goal is to do well in the European Championships and do well in the World Cup. It would be a regret to leave the national team to someone else,” he said, as per Goal.

“No one tried to hire me this summer.”

Mourinho: ‘I hated playing against Doherty’

The 28-year-old made over 300 appearances during his 10-year Wolves stay, but has now switched to Spurs for £15million, signing a four-year deal.

Mourinho has previously expressed his delight with Tottenham’s early transfer business, a sentiment he has echoed once more.

“Incredible career at Wolves…League One, Championship, Premier League and Europa League. He did everything for them, so job done there.

“I know that he’s leaving with a lot of pride but this is one new step for him and he’s full of motivation. I am so, so happy.”

Kepa to fight for Chelsea future

Kepa Arrizabaga is determined to fight for his Chelsea future under Frank Lampard, according to The Sun.

The Spaniard has reportedly repaired his relationship with Lampard and has been left thoroughly impressed by Chelsea’s summer signings.

The ‘keeper has fallen down the pecking order at Chelsea, and Standard Sport believes Lampard is looking to replace the youngster.

Kepa still has four years remaining on his long-term contract.

Garcia reveals Inter are yet to speak to Chelsea regarding the defender, who made just 15 Premier League games under Frank Lampard last season.

“It is possible he will leave Chelsea,” he told FCInter08. “I have not yet spoken to the club. All I can say is that there is interest from Inter in the player. We’ll see.”

Here we go! This is really picking up pace now!

Manchester United have had a bid of €40million (£35.6m) for Donny van de Beek accepted by Ajax, according to Fabrizio Romano.

Romano reports the final paperwork and his medical will take place next week!

Rashford provides Van de Beek his approval ahead of his move

It’s not only the fans who are delighted by the news of Donny van de Beek’s seemingly imminent move to Manchester United!

Star striker Marcus Rashford has taken to Twitter to like a tweet by Fabrizio Romano, of which he reported that United are confident of completing a move for the Ajax man next week.

Standard Sport understands the 23-year-old is close to becoming Ole Gunnar Solskajer’s first signing of the summer after talks progressed significantly over the weekend.

Fulham have announced the signing of Southampton midfielder Mario Lemina on a season-long loan with an option to buy.

After promotion from the Championship, Scott Parker looks to add proven Premier League quality to his squad.

Of his move, Lemina said: “Now I’m with Fulham, I’m really happy and I’m glad to be part of the project.

“I spoke with the manager and he’s got some good ideas about the team, about the project, about everything he wants to do this season, and I’m happy to be a part of it.”

Valencia have made contact with Arsenal regarding a proposed move for Matteo Guendouzi, according to Super Deporte.

The 21-year-old has fallen to the periphery of the Arsenal squad, having not played since his clash with Brighton striker Neal Maupay in June.

Mikel Arteta has hinted he the midfielder has a chance to be reintegrated into the squad.

Valencia are interested in prizing him away from London, however, though they could only afford a loan deal.

Van de Beek: What will he bring Man Utd?

So, it seems appears as if Manchester United are edging towards their first high-profile signing of the summer! And it comes in the shape of Donny van de Beek!

Standard Sport understands the Ajax midfielder has been on United’s radar for some time now – but what will he bring Ole Gunnar Solskjaer’s team?

Well firstly, for a man just 23-years-old, he’s done a lot! Van de Beek is an established Netherlands international who has won three trophies during his time at Ajax.

The midfielder has scored 41 goals and provided 34 assists in 175 games for the Dutch club, including 21 goal involvements in just 37 games last season.

Alongside Paul Pogba and Bruno Fernandes in midfield. United start to look some attacking threat!

From a potentially future Manchester United player to a former one!

Barcelona are interested in signing Lyon forward Memphis Depay this summer and are willing to include Samuel Umtiti in a deal, report Mundo Deportivo.

Newly-appointed boss Ronald Koeman is looking to freshen up his attack this summer, with a swap deal ideal due to their sky-high wage bill.

It was Lyon where Umtiti began his career, and Barcelona are hoping the 26-year-old will happily return.

Standard Sport understands the Dutchman is close to becoming Ole Gunnar Solskjaer’s first signing this summer, after talks progressed significantly over the weekend.

United stepped up their pursuit after initially weighing up a move in January.

They have monitored his situation ever since – well aware of Real Madrid’s hopes of taking him to the Bernabeu.

A fee in the region of £40million is believed to be in place to land the Holland international.

Van de Beek is seen as an ideal fit by Solskjaer.

Fabrizio Romano has reported United have agreed personal terms with the Dutchman, who has agreed a five-year deal at the club.

Dutch outlet De Telegraaf have also reported United have agreed a fee for the 23-year-old, which they claim is €45million (£40m) including bonuses.

Leeds have opened talks with Udinese over the signing of midfielder Rodrigo De Paul, according to Goal.

Marcelo Bielsa is looking to significantly strengthen this summer and the 26-year-old is reportedly one of his prime targets.

Udinese are said to be demanding £27million for De Paul, who is attracting interest from a number of Serie A clubs.

Barcelona will have to pay £12million if they are to cancel Luis Suarez’s contract this summer, according to Goal.

Newly-appointed manager Ronald Koeman will likely have a significantly different squad to play with next season, with all-but seven players up for sale.

Suarez has been deemed surplus to requirements by Koeman, who told the Uruguayan he doesn’t feature in his plans.

The 33-year-old – who has reportedly received interest from five clubs – will leave should the club cancel his contract.

Frank Lampard believes Chelsea have gained a “great addition” in Ben Chilwell, who he insists will improve his side offensively and defensively.

Lampard long considered Chilwell as his ideal long-term solution at left-back, bringing the 23-year-old to Stamford Bridge in what was believed to be a £50million deal.

“With Ben Chilwell, he is a player I know very well, he has been pretty much England’s first-choice left-back now in recent times,” Lampard told the club’s website.

“Great qualities in terms of how he can join in, he is athletic, his physicality, the way he plays and the quality of his left foot.

“For us in terms of how he can help out on the left side, attack-wise and defensively, which of course is always first and foremost, I am excited to work with him so I think he is a great addition.