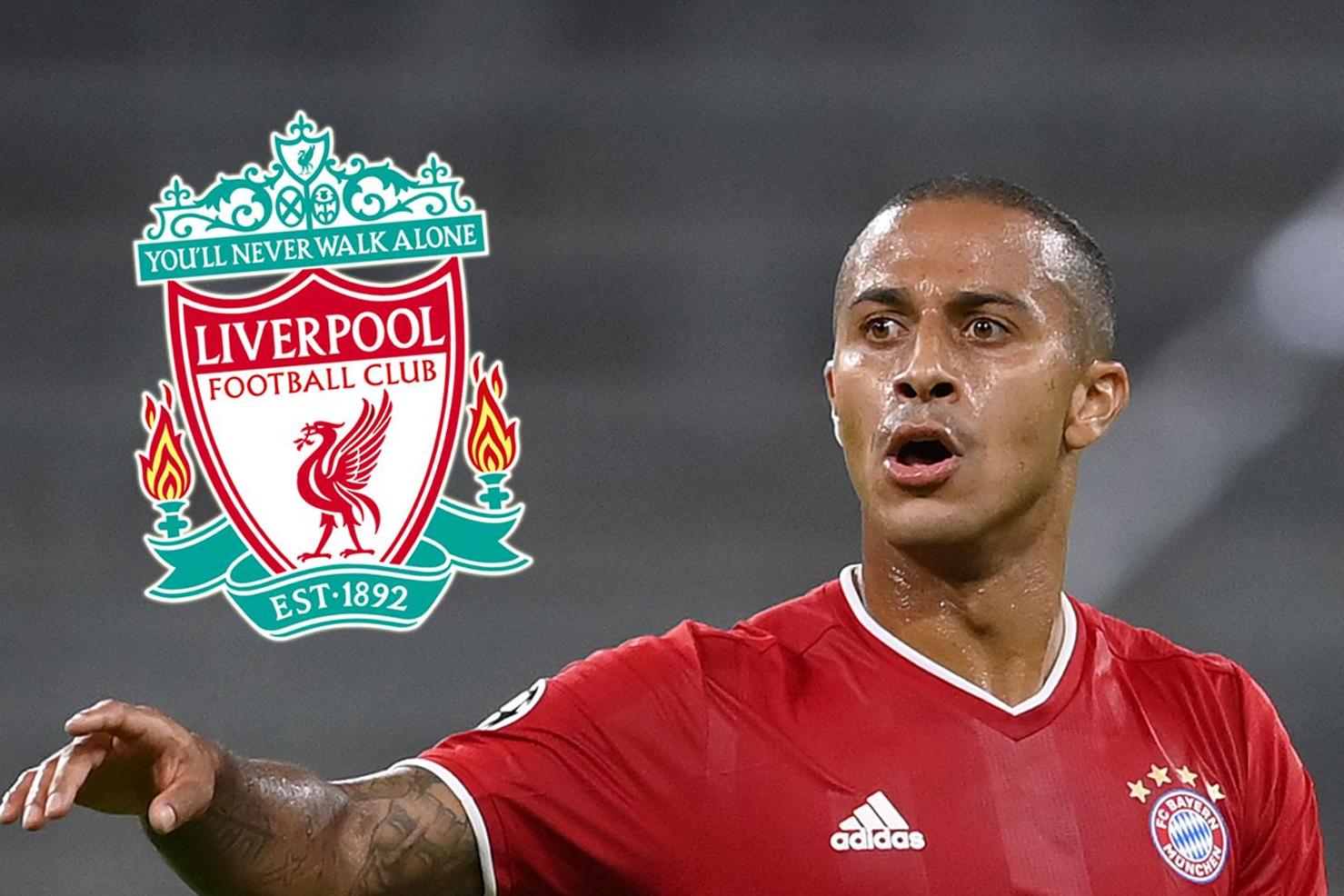 Tottenham are closing in on a sensational double deal for Gareth Bale and Sergio Reguilon having already signed Pierre-Emile Hojbjerg, Joe Hart and Matt Doherty during the window.

Arsenal have secured Pierre-Emerick Aubameyang‘s future after signing Willian and Gabriel Magalhaes, and Lyon’s Houssem Aouar appears to be the next target.

Manchester United have signed Donny van de Beek while working on a deal for Jadon Sancho, and Liverpool are biding their time in pursuit of Thiago Alcantara.

Thiago to Liverpool: What you need to know

Thiago is available for a cut-price fee as he nears the end of his contract, and has made no secret of his desire for a new challenge.

Bayern are believed to want around €30m for the midfielder, and talks have now opened over a fee.

The German club’s former president Uli Hoeness claimed last week that Thiago had an agreement with Liverpool and possibly Manchester United in place.

But it is the Reds who are now strong favourites to secure his signature after firming up their interest this week.

Jurgen Klopp has made no secret of his admiration for the Spaniard, who has won 16 trophies during his time in Munich.

Thiago was arguably Bayern’s man of the match as they defeated Paris Saint-Germain in the Champions League final last month.

Attempts to tie him down to a new deal have failed, however, with the midfielder’s heart set on a move to the Premier League.

The latest development signals the first move of real intent from the Premier League champions towards signing the Spain international.

Bale to cost less than £15m all in

No wonder Daniel Levy is keen on the deal.

Standard Sport understands that the deal to sign Gareth Bale on loan will cost Spurs less than £15million, including wages and loan fees, with Real Madrid agreeing to continue paying more than half of Bale’s wages.

An interesting update from Football London. Tottenham “hope to announce deals for both Gareth Bale and Sergio Reguilon tomorrow.”

We understand Reguilon has undergone his medical, with this report adding that Bale has also “had a MRI checks and completed most of [his] medicals in Spain.”

Alasdair Gold adds: “On the loan deal for Bale, it’s closer to a 60/40 split on his wages with Spurs picking up the 40.”

Houssem Aouar has been a target for number of clubs over the last few windows, with Man City and Barcelona to name a couple linked with the Lyon captain.

Arsenal have been interested for a while now, and their pursuit appears to be gathering pace – but cash is a problem for the Gunners.

Fabrizio Romano says that the 22-year-old is Arsenal’s “top target”, and that Aouar would “like to join” the Gunners, who have spoken to the player’s agent “many times”.

However, Lyon’s €60m (£54.5m) price tag could be a sticking point, even if Arsenal recent made a cool £20m by selling Emi Martinez to Aston Villa.

It would appear that Arsenal may have to sell more players before they can get hold of Aouar.


Surely this is good enough for the top four this season?

Ronald Koeman says Luis Suarez will be treated like any other player if he ends up staying at Barcelona.

Suarez was left out of the squad for the second match in a row in Barcelona’s Wednesday night friendly against Girona.

“I’ve spoken to him about his future and we are waiting to see whether or not he leaves, we still don’t know,” Koeman told Catalan network TV3 after the win over Girona.

“But we respect every contract here and if in the end he does not find a club and he stays, he will be just like any other player in the squad.”

Everton manager Carlo Ancelotti has responded to transfer speculation linking the club with a move for Chelsea’s Fikayo Tomori, admitting that signing a centre-back before the end of the window has become a priority.

“Holgate is out and Jarrad we don’t know his injury and how bad it is, we have to look tomorrow,” said Ancelotti.

“There is a possibility to find a centre-back and I think we have to.

“The Holgate update is that he doesn’t need the surgery so maybe he can recover earlier than normal but I think we can manage until Mason comes back with three centre-backs no problem.”

The Italian was keen on a loan deal for Chelsea’s Fikayo Tomori but he is also attracting interest from Rennes and Everton’s pursuit has gone somewhat cold.

“I am not talking about players that are not here,” was his response when asked about Tomori.

Reguilon deal ‘done’ and Bale not far away

Former Tottenham winger Darren Anderton believes Gareth Bale is ‘exactly what Spurs need’ with the Welshman on the verge of returning to club after seven years at Real Madrid.

“To come back to somewhere where you are loved really does make sense,” Anderton told talkSport. “It has to be great for all parties and after watching the game on Sunday oh boy do Spurs need it, someone who can go and win a game with a bit of magic and creativity and flair.

“He has a great mentality, he carried the Wales team, he carried the Tottenham team when he was here, winning games on his own. He is exactly what Spurs need. This is one that everyone is very excited about.

“He has still got that speed and once he gets going you can’t catch him. He scores goals, makes goals, he does it all.”

Roma have not dropped their interest in signing Lucas Torreria from Arsenal.

Fiorentina and Torino have been closely linked with the midfielder but Calciomercato.it report Roma are still interested in bringing him to the Stadio Olimpico.

The Gunners are in talks with Dijon and it is hoped a deal can be done for around £1.5m, with the 25-year-old Iceland international ready to sign a long-term contract.

Manchester United have added Atalanta’s Amad Traore to their list of right-wing targets, report the Mirror.

Sergio Reguilon is at Tottenham’s training ground as the Real Madrid defender closes in on a move to the club.

The left-back arrived at Hotspur Way on Wednesday ahead of completing a medical on Thursday, with official confirmation likely coming before Spurs take the field in Bulgaria to face Lokomotiv Plovdiv in the Europa League in the evening.

Reguilon is expected to cost around £25million, with Tottenham agreeing to include a number of clauses in the deal.

Real Madrid will have the option to buy back the 23-year-old for around £36m within two years and meet any fee Spurs agree with another club.

Should the deal be finalised on Thursday, the club will be able to Reguilon in time for Sunday’s trip to Southampton.

The Bundesliga side will hold talks with the 27-year-old over a move back to Germany.

Bale closer than ever to leaving Real, says agent

Gareth Bale is edging closer to agreeing a deal to return to Tottenham, according to the forward’s agent.

Standard Sport understands that Spurs remained locked in talks with Real Madrid regarding a deal for Bale on Wednesday morning.

While Tottenham boss Jose Mourinho refused to discuss speculation, a move would appear to be close with Jonathan Barnett confirming on Wednesday evening talks are “slowly progressing.”

“Gareth is closer to leaving Madrid than at any time in last seven years,” Barnett told BBC Sport.

“We are still negotiating. We shall see how it goes.”

Bale could complete return this week

The Guardian report Tottenham are confident a deal to bring Gareth Bale back to north London can be confirmed by the end of the week.

The report adds an agreement has been reached for Real to pay part of Bale’s wages, thought to be £600,000 a week.

Reports in Spain tonight claim Sergio Reguilon and Gareth Bale have BOTH completed medicals ahead of their moves to Tottenham.

To be taken with a pinch of salt for now, perhaps.

Dele ‘offered to many clubs’ on loan

Another update on Dele Alli as Fabrizio Romano claims he WAS offered to Real Madrid on loan and has been offered to “many clubs.”

Writing on his Instagram, the Sky Italy journalist claims: “Dele Alli is not part of the Gareth Bale deal with Real Madrid.

“He has been offered to Real on loan as to many other clubs but is not included in Bale negotiations.

“Different deal and Real Madrid are not focused on Alli in this moment.”

Dele left out of Spurs squad

Tottenham left Dele Alli and Toby Alderweireld behind on Wednesday as they flew out to Bulgaria for their Europa League play-off.

Jose Mourinho revealed at his pre-match press conference that he was leaving eight senior players at home but still planned on fielding a strong line-up against Lokomotiv Plovdiv.

The identities of the eight were not confirmed by Mourinho, though Standard Sport understands Alli and Alderweireld are staying at Hotspur Way.

Alli, who was withdrawn at half-time against Everton on Sunday, was briefly linked with a move to Real Madrid on Tuesday night as part of negotiations for Gareth Bale.

Reports that Alli’s omission is related to uncertainty over his future are thought to be wide of the mark with the midfielder firmly part of Jose Mourinho’s plans.