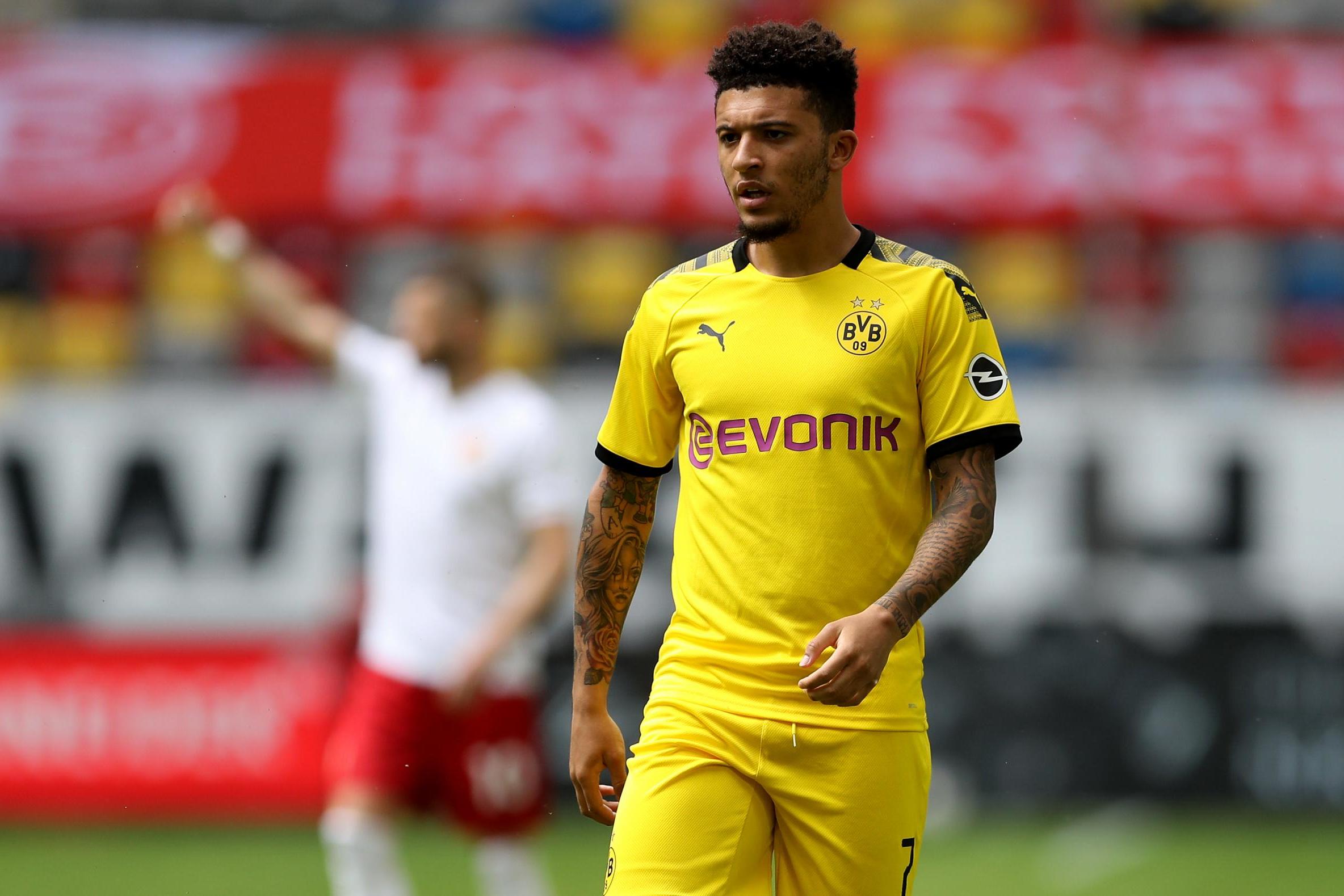 Alphonse Areola – a member of France’s 2018 World Cup-winning squad who spent last season at Real Madrid – has joined Fulham from PSG on a season-long loan deal that includes the option of a permanent transfer next summer.

He was recently offered to Arsenal as a potential short-term replacement for Emiliano Martinez, but the newly-promoted Cottagers always looked favourites to get a deal over the line.

“I am very happy everything is done,” Areola said. “Scott Parker called me and I had a good feeling. He said he really wanted me.

“Fulham is a historic club in London and I have heard a lot about the stadium.

“I hope this season will be a good one for us. I want to bring my energy and do everything for this team to keep us where we belong to be.”

More on that breaking news to come shortly.

Hector Bellerin could soon be waving goodbye to Arsenal.

Forest Green Rovers’ newest shareholder has spent his entire career with the Gunners aside from a brief loan stint at Watford in 2013-14, though now appears to be searching for a fresh challenge.

According to The Independent, Paris Saint-Germain have already made contact with Bellerin’s representatives, with Arsenal prepared to sell the right-back for a fee of around £35m as they look to raise the necessary funds to sign a new midfielder.

Tottenham could bolster their forward ranks with the signing of Napoli frontman Arkadiusz Milik.

The Express reports that Spurs are weighing up an offer for the Polish international, 26, as they look to provide support and competition for Harry Kane.

Napoli are said to want around £26m for Milik, who has less than 12 months left to run on his current contract at the Stadio San Paolo and has reportedly told the Serie A club that he is not interested in penning an extension.

But there are still significant obstacles regarding Dortmund’s valuation and Sancho’s salary that is forcing United’s hierarchy to proceed with caution.

While there is a strong belief the England international wants to join Solskjaer’s revolution, United are adamant they will not overpay in a market hit by Covid-19.

They believe transfer prices have been depressed by around 20-30 per cent.

And despite their determination to land Sancho, they remain prepared to move on to alternative targets.

Speaking of Manchester United, it appears the club have finally made a breakthrough of sorts in their long-running bid to land no1 target Jadon Sancho from Borussia Dortmund.

At last progress made regarding agent fees. Not there yet, but after a quiet few weeks it’s evidence of their ongoing efforts to get the deal done.

The versatile midfielder became Ole Gunnar Solskjaer’s first signing of the summer when he arrived at Old Trafford from Eredivisie giants Ajax in a £40m deal last week.

However, the 23-year-old was then immediately required for international duty, featuring for the Netherlands in their Nations League matches against Poland and Italy.

Van de Beek was finally able to get to work at Carrington earlier today as United continued preparations for their 2020-21 Premier League opener against Crystal Palace on September 19.

Chelsea are in formal talks with Rennes over a deal to sign goalkeeper Edouard Mendy, writes Jack Rosser.

Frank Lampard wants to sign a new goalkeeper after losing faith in Kepa Arrizabalaga and has identified 28-year-old Mendy as his no1 target.

Mendy, a Senegal international who helped Rennes qualify for the Champions League last season, has told the French club he wants to join Chelsea.

Rennes president Nicolas Holveck has confirmed they are in talks with Chelsea over a deal as the Blues prepare to take their summer spending to around £250million.

Holveck said: “Discussions have started with Chelsea for Edouard Mendy. I can understand his desire, he told us. But for the moment, there is no agreement and for a transfer, we need an agreement of the three parties.”

The two-time World Cup winner has signed a one-year deal with Casey Stoney’s side, subject to obtaining a work permit.

The 32-year-old returns to Europe after seven seasons with National Women’s Soccer League side Portland Thorns.

Eze given Palace No10 shirt

Eberechi Eze has been given the No10 shirt at Crystal Palace, according to The Beautiful Game Podcast.

Andros Townsend has worn the No10 shirt since arriving at Crystal Palace in 2016 but he has been moved aside to accommodate the new arrival.

Townsend is one of a number of players who could still leave Selhurst Park this summer.

Chelsea midfielder N’Golo Kante is now a major target for Manchester United, according to Transfermarketweb.

Though the player has stated his intention to stay at Stamford Bridge, the Blues could be willing to sell for a €60m transfer fee

Kante, who is tied to a Chelsea contract until 2023, is still a signing dream for Inter Milan as well.

Havertz takes No29 at Chelsea

Kai Havertz has taken the No29 shirt from Fikayo Tomori, according to The Athletic.

Havertz had the same squad number at Bayer Leverkusen and asked to take it upon arrival at Chelsea.

Tomori, who now looks poised for a loan move to Everton, was happy to oblige.

New Manchester United midfielder Donny van de Beek has arrived at the club’s training facility for the first time after his £40m move from Ajax.

The 23-year-old has been in Uefa Nations League action with the Netherlands and will now meet his new team-mates before the Premier League campaign starts.

Manager Dean Smith said: “Ollie has developed into one of the most sought-after strikers in the country and we are looking forward to seeing him show his great qualities in an Aston Villa shirt.”

Reports had suggested Villa were prepared to pay a club-record £28million, rising to a potential £33million, for the forward.

The club had previously been linked with Callum Wilson, who instead joined Newcastle from Bournemouth.

Watkins, who previously played under Smith at Brentford, said: “I am so excited to join Aston Villa and to reunite with Dean Smith as my head coach. I cannot wait to wear the famous claret and blue in the Premier League. I want to do something special here and score some goals.”

Jurgen Klopp is set to hold talks with Georginio Wijnaldum over his uncertain future today with Barcelona continuing to circle.

After representing the Netherlands in Nations League over the course of the last week, the Dutchman will return to Melwood on Wednesday in order to continue preparations for the new Premier League season.

However, whether he will be at Liverpool beyond the opening stages of the coming campaign remains unclear amid links with a move to Camp Nou.

New Barca boss Ronald Koeman is keen on signing a player who starred for him in the Dutch national team prior to his decision to take the reins at Barca.

And Klopp now hopes to ascertain whether Wijnaldum himself is eyeing a change of scenery after winning a string of honours across his four years at Anfield.

Michy Batshuayi is relishing the prospect of regular football ahead of his return to Crystal Palace on loan.

The Chelsea striker, who scored twice for Belgium against Iceland last night, is set to pen a 12-month contract extension with the Blues before joining Palace on loan for the second time in his career.

During his previous spell at Selhurst Park, Batshuayi bagged six goals in 13 appearances and Roy Hodgson is now looking to the 26-year-old to solve his side’s goalscoring woes.

For Batshuayi, who has not played a minute for Chelsea since a 2-0 defeat to Manchester United in February, the move is all about getting playing time ahead of next summer’s Euros.

“Am I going to re-sign at Chelsea to be loaned to Palace? You’re on the right track when you say that,” said Batshuayi. “It’s something like that. The most important thing for me is to be ready when I come to the national team.”

Chelsea are also closing in on a deal for Rennes goalkeeper Edouard Mendy, as Frank Lampard looks to provide competition for Kepa Arrizabalaga.

Defender Fikayo Tomori is thought to be in line for another season away on loan, this time with Everton.

West Ham have been told Burnley will sell James Tarkowski if the Hammers meet their asking price.

David Moyes wants to sign Tarkowski as he bids to strengthen his defence and West Ham hope a bid of around £30million will be enough to secure the 27-year-old.

Matt Doherty has been pictured training with his new Tottenham team-mates for the first time as they step up preparations for Sunday’s Premier League opener against Everton.

The 28-year-old Republic of Ireland full-back joined Spurs from Wolves in a £15million deal last month as Jose Mourinho bolstered his right-back options ahead of the 2020-21 campaign.

Doherty is in line to make his first competitive start for Tottenham in their curtain-raiser against the Toffees at Tottenham Hotspur Stadium. He played in every Premier League game of the 2018-19 season and is poised to play a regular role under Mourinho, with Serge Aurier up for sale.