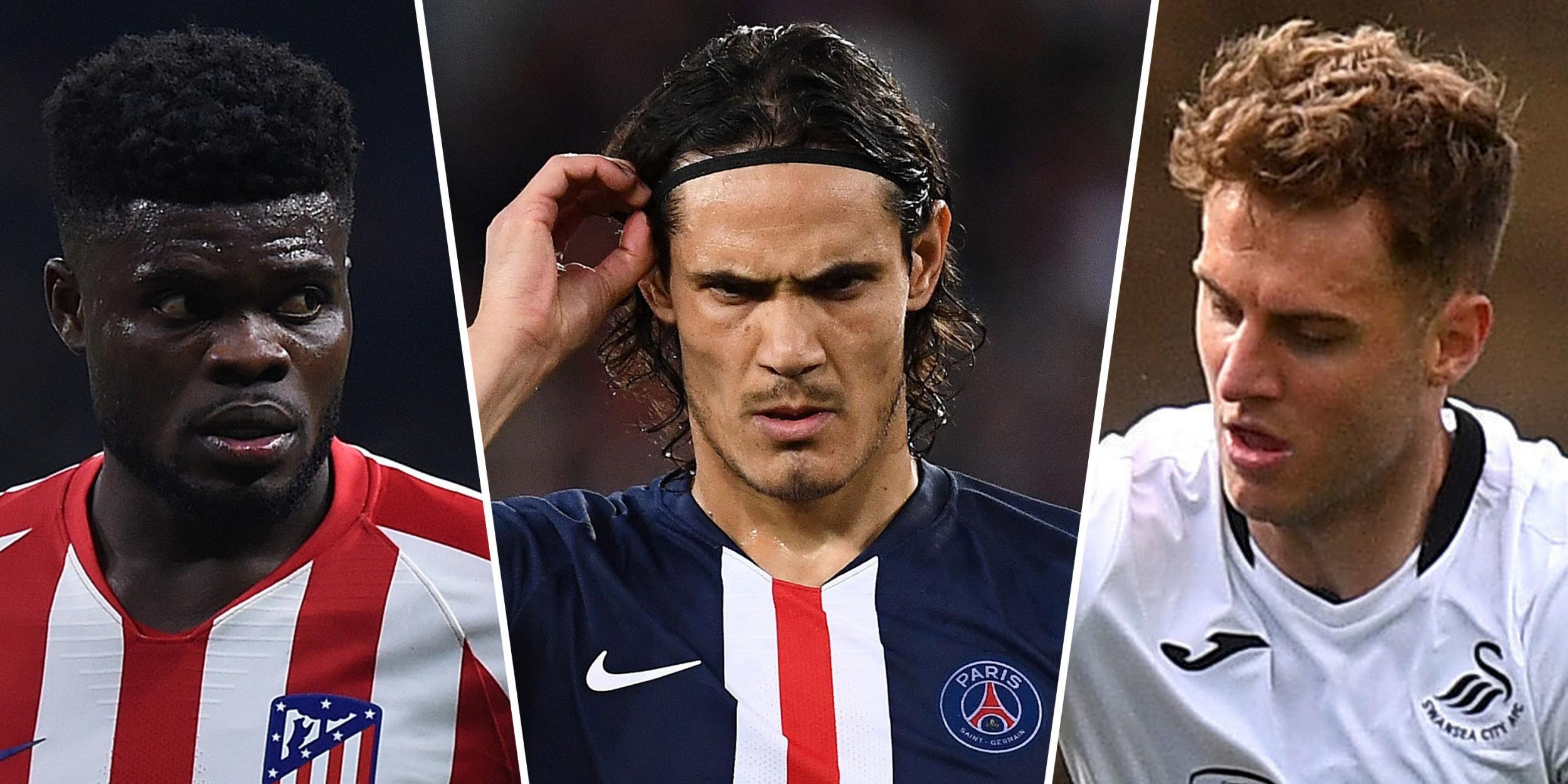 Clubs in the UK will have until 5pm on Friday October 16 to complete domestic transfers, but the big moves must be completed by 11pm BST tonight.

All eyes will be on Manchester United today, with Alex Telles through the door and Edinson Cavani expected to follow. Ousmane Dembele could also arrive from Barcelona.

Arsenal have launched a dramatic late bid for Thomas Partey by triggering his release clause after Houssem Aouar confirmed that he would be staying at Lyon for another season.

Tottenham, meanwhile, have decided against a late move for Inter Milan defender Milan Skriniar but have entered talks with Swansea over Joe Rodon.

Solskjaer has had Telles watched extensively during his time at the club – regarding him as Portugal’s best left-back.

He said: “He is a player we have been tracking for some time and his performances over the past few years are exactly what we are looking for.

He is a fighter and a winner and will add real determination and competition to the squad.  Alex has the qualities, both as a player and as a person, that we want here at Manchester United.”

West Ham are in talks with Chelsea over a late loan deal for Fikayo Tomori after it became clear that Antonio Rudiger would not be leaving the club this window, reports Jack Rosser.

The Hammers have been keen on adding a central defender for the entire transfer window, but had considered pursuing targets in the Championship after they failed to reach an agreement with Burnley for James Tarkowski.

They will free up further funds for wages after negotiating an end to Jack Wilshere’s time at the club, with the former Arsenal man set to become a free agent.

Arsenal have reportedly taken a giant step towards securing the signing of Thomas Partey from Atletico Madrid.

The Gunners have reportedly deposited the Ghanaian’s release clause and LaLiga have subsequently informed the Spanish outfit the £45m fee has been paid.

That would grant Arsenal permission to discuss the contract with Partey, although it is believed personal terms have already been agreed on a five-year deal.

Tottenham are pursuing a deal for Swansea centre-half Joe Rodon but the clubs remain someway apart in their valuations of the Wales international.

The Premier League club are reluctant to meet Swansea’s £18m asking price and value Rodon, 22, at closer to £7m, but they are hopeful of reaching a compromise with the Swans.

Spurs would have until October 16 and the close of the domestic transfer window to complete a deal for Rodon but they must confirm their Europa League squad for the group stages by 11pm BST on Tuesday.

Rodon emerged as a defensive target after Spurs abandoned moves for Milan Skriniar of Inter Milan and Chelsea’s Antonio Rudiger. Rodon is not the only Championship defender Spurs have considered, with the club having also watched Bournemouth’s Chris Mepham.

Chelsea did all their business in terms of arrivals early in the window. Now it’s about outgoings.

The Chelsea midfielder is desperate for game time in order to return to peak form and fitness following his lengthy injury lay-off and with the Euros at the end of the season.

Chelsea boss Frank Lampard has held talks with the England international in recent weeks and is happy to allow him to go and get game time away from Stamford Bridge. Southampton and West Ham were both keen on a deal but could not muster the funds to pay Loftus-Cheek’s wages and agent fees around the deal.

The Cottagers are also closing in on a deal for defender Joachim Andersen, who is understood to be undergoing a medical this evening.

Reports emerging from Italy suggest Roma have beaten the deadline to complete the signing of Chris Smalling from Manchester United.

According to Sky Sport Italia, the Giallorossi deposited the paperwork before the local 8pm deadline to register the centre-back.

We are still awaiting confirmation on that one.

Arsenal are closing in on the signing of Atletico Madrid midfielder Thomas Partey in a £45m deal.

Standard Sport confirmed earlier today that the Ghanaian had a medical scheduled in Madrid with the Gunners set to activate his release clause.

And now, multiple reports suggest the 25-year-old has flown to London to finalise what would be the biggest transfer on deadline day.

Let’s see if this one gets over the line…

The fireworks are set off, which seems a bit over the top for deadline day, as the Italian transfer window draws to a close.

One of the biggest deals we’re still waiting on is to discover whether Chris Smalling’s transfer to Roma has been completed in time.

Manchester United have made their second signing of the day with a capture of highly-rated teenager Willy Kambwala from Sochaux.

The France Under-17 international will arrive at Old Trafford in a deal worth £3.6m and the Ligue 2 club have confirmed the deal.

“An agreement has been reached between FC Sochaux-Montbéliard and Manchester United Football Club for the transfer of Willy Kambwala.

“The 16-year-old central defender, trained in Seloncourt, signed up with the English club after having satisfied the usual medical examination.

“FCSM did not want to oppose the wishes of the player and his family, allowing him to join the project proposed by Manchester United.”

Manchester United defender Chris Smalling will finally seal his permanent transfer to AS Roma after a breakthrough in negotiations.

That’s according to The Athletic’s David Ornstein, who reports Roma have agreed to pay £15m up front with a further £5m in add-ons for the 30-year-old.

The centre-back enjoyed a successful loan spell at the Stadio Olimpico and now looks set to revive his Italian adventure.

The Frenchman will spend a third consecutive season out on loan after spells at AC Milan and AS Monaco, reuniting with former boss Gennaro Gattuso at the San Paolo.

‘The new Zlatan’… Who is Arsenal-bound Nikolaj Duus Moller?

For Arsenal, the summer-long pursuit of Thomas Partey is drawing to a close, with the Gunners launching a late attempt to sign one of their No.1 targets.

However, deadline day does not end their for the north London club, as Standard Sport understands striker Nikolaj Duus Moller will also be joining from Malmo.

The highly-rated 18-year-old, who has been compared to Zlatan Ibrahimovic, is expected to sign a four-year deal with an option of a further season and will join up with the U23 squad.

Need the lowdown on the Gunners’ latest recruit? Click here for the full profile.

Man Utd not giving up on Sancho

United have been at loggerheads with Borussia Dortmund over Sancho, with the Germans refusing to lower their £108m valuation, writes James Robson.

Old Trafford’s hierarchy believed a compromise could be reached and have not given up hope even on deadline day. But negotiations with Barcelona over Dembele and Watford Sarr underline the concern within the club that they will have to resort to a back up plan.

Kingsley Coman is another option they have looked at. But such is Solskjaer’s determination to bring in Sancho that United have attempted to broker loan agreement for their alternative options, with Barca and Watford both pushing for permanent deals.

Neither appeal to United, who are clearly hoping to be in a position to move for Sancho at a later date, even if they fail in this window.

Our Manchester correspondent James Robson has all the transfer details from Old Trafford ahead of the deadline, with some movements still potentially to come…

“Man United are still to rule out moves for No1 target Jadon Sancho – or back up options Ousmane Dembele and Ismaila Sarr.

“The club have also spent the last 24 hours trying to land Amad Traore ahead of a January arrival from Atalanta and Facundo Pellestri.”

Manchester United have completed the signing of Alex Telles in a £13.6million deal.

The Brazil international’s move comes after he was originally identified by United scouts in 2014.

Telles becomes Solskjaer’s second signing of a desperately frustrating window, which saw United start the season with Donny van de Beek as the only new addition.

His arrival is set to spark a frenzied end to the window for Ole Gunnar Solskjaer, who has already agreed a deal for Edinson Cavani and is trying to push through as many as three more signings before the deadline.

Our football correspondent Dan Kilpatrick has the latest on Tottenham’s potential deal to sign Joe Rodon:

“Tottenham are pursuing a deal for Swansea centre-half Joe Rodon but clubs are currently miles off.

“Spurs want to pay around £7m & Swansea asking £18m. Nothing has to happen today – domestic window is open until October 16.”

Manchester United have signed Alex Telles from Porto on a four-year deal.

The 27-year-old has put pen to paper on a contract until 2024, with an option of another year.

More to come on that story!

Tottenham are in discussions with Swansea over a move to sign defender Joe Rodon, Sky Sports report.

Spurs have reportedly lodged an £18m bid for the 22-year-old, who has been linked with both Manchester clubs earlier this year.

Albert Adomah has returned to QPR on a free transfer after his release from Middlesbrough.

The 32-year-old has signed a two-year deal with the Rs and being a boyhood QPR fan, he expressed his delight at securing a move.

“Imagine being a supporter and playing for the club you love,” he told the club’s official website.

“Words can’t even describe it. It’s just amazing, just a pleasure to be here.”

Chelsea defender Antonio Rudiger has received permission from the DFB (German FA) to join up with the national squad at a later date.

The 27-year-old seems to be keen to stay closer to home in case he is able to leave the Blues before the transfer deadline after falling out of favour at Stamford Bridge.

The defender reportedly turned down West Ham and with a move to Tottenham complicated due to the clubs’ relationship, it seems Rudiger is running out of realistic options.

Former club Roma are apparently interested in bringing him back to the Serie A after struggling to agree a deal for Manchester United defender Chris Smalling.