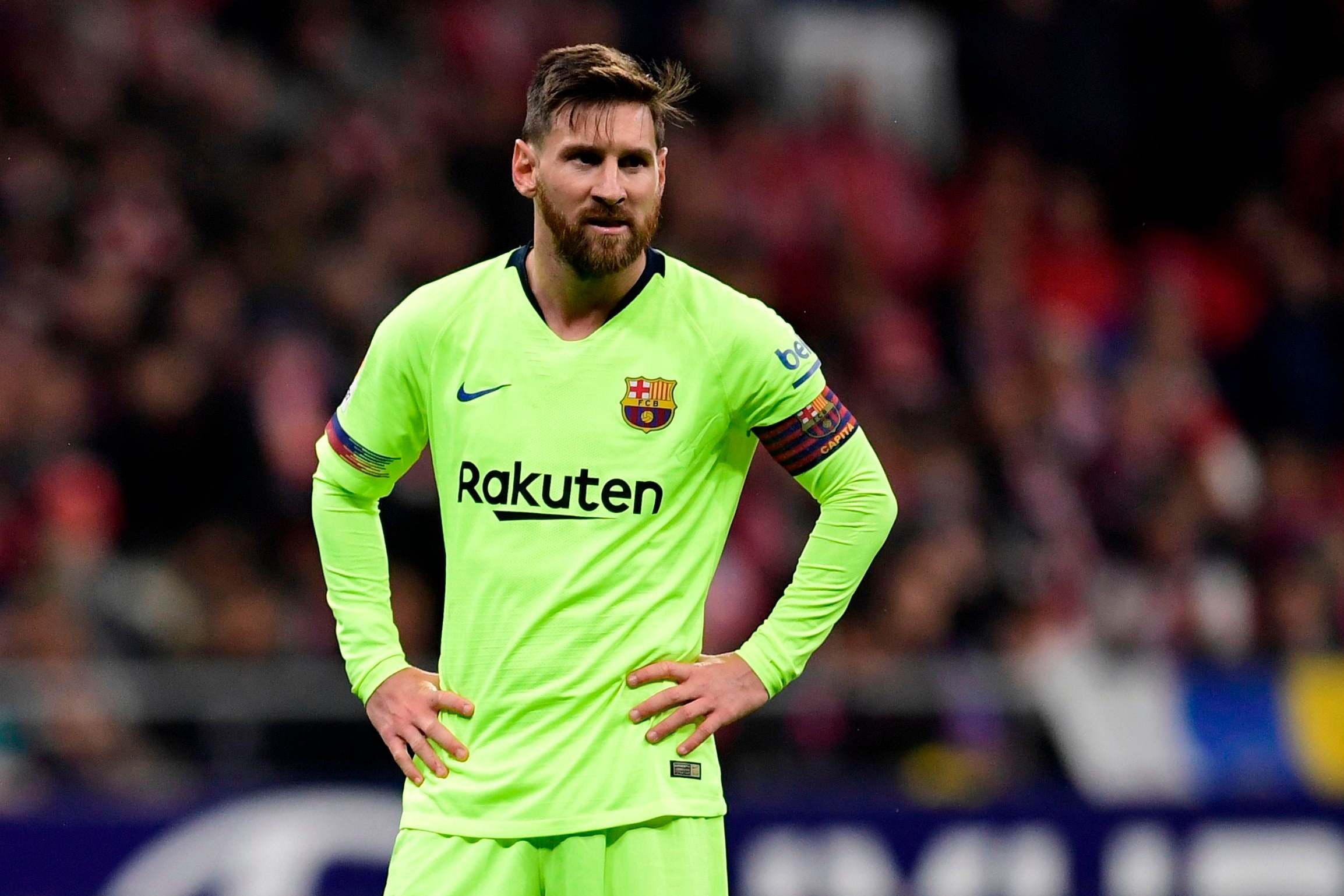 Messi ‘to stay at Barca’

In the last few minutes, Spanish outlet Marca are reporting that Lionel Messi is set to STAY at Barcelona next season, completing a remarkable U-turn.

The report claims that after talks between the club and his father, also his agent, Messi has decided to remain at the Nou Camp for another season, with his contract set to expire next summer.

The suggestion is that while Messi does want to leave, he wants to do so on amicable terms, not through a legal battle.

Wales boss Ryan Giggs has confirmed that his decision to substitute Gareth Bale at half-time during tonight’s 1-0 win over Finland was merely a precaution.

With speculation over his future continuing to mount, Bale started the game but made way at half-time after appearing to feel a thigh problem.

However, Giggs said: “It was planned before. He’s had no football. Gareth has had the least football out of everyone. It was best with potentially Sunday in mind to bring him off.”

Tottenham enquired about the possibility of re-signing Christian Eriksen this summer, according to football transfer expert Fabrizio Romano.

Speaking on the Last Word on Spurs podcast, Romano claimed Inter sources told him Spurs had been in touch about brining the Dane back to north London just eight months after he left the club.

Yesterday, reports in Italy claimed Inter were looking to offload the midfielder, with Antonio Conte unimpressed with his performance. Romano, however, insists that is not the case an expects him to stay at San Siro.

Werner on target for Germany

New Chelsea striker Timo Werner was on target for Germany on the opening night of the new Uefa Nations League campaign, but it was not enough to earn victory as Jose Luis Gaya’s stoppage time leveller earned Spain a point in Stuttgart.

Germany failed to win a single game during the inaugural edition of the tournament and were only spared relegation to the second tier by the competition’s restructuring.

Despite being without their Champions League-winning Bayern Munich contingent, they looked set to break that duck as Werner’s smart turn and finish put them in front midway through the second half.  It wasn’t to be, however, as Gaya’s close-range finish ensured a share of the spoils in the 95th minute.

Olivier Giroud has backed Thiago Silva’s leadership ability to have an immediate impact upon Chelsea’s young side – and believes the club’s summer transfer dealings could catapult them into title contention.

While the emphasis has been on youth since Lampard took the Stamford Bridge job a year ago, Silva’s signing should add much needed experience to a backline that was the side’s Achilles heel last season.

“He can bring his experience, his background and his leadership,” Giroud said. “I think the coach bought him for that. We have a lot of young players.

“He still has his qualities, of course, even if like me he is getting a little older, but I’m sure he will bring us a lot.

“He is going to discover a new league and I am sure he will adapt very quickly. We have a lot of ambitions this year with the recruitment and I hope we can join the race for the title.”

Pulisic ‘could play for Barca, Real or Bayern’

USA boss Gregg Berhalter has heaped praise on Christian Pulisic after his excellent debut season at Chelsea – and backed him to get even better.

“Pulisic is a leader at Chelsea at 21. It doesn’t happen that often that a player from the Bundesliga goes to a top club in England and immediately convinces there.

“Christian quickly got used to the speed and the more physical style of playing in England. He is a role model for all other US players in the Bundesliga whose goal is the Premier League.

“Christian is perfect for Chelsea. All dangerous offensive actions run through him, he shines as a goalscorer and as a preparer.

“If Christian maintains this level, he can also play for the biggest clubs in the world like Bayern, Barcelona or Real Madrid without any problems.”

There’s plenty of interest on the transfer front in Germany’s Nations League meeting with Spain this evening.

New Manchester City winger Ferran Torres is in the Spain XI, while the man he replaced at the Etihad, Leroy Sane, lines up for the Germans.

Kai Havertz is only on the bench for Joachim Low’s side but Timo Werner, who he is expected to join at Chelsea, is in action.

New Leeds striker Rodrigo is leading the line for Spain and has already missed an excellent chance to open the scoring.

Sky in Italy say Chris Smalling is set to join Roma on a permanent basis after a breakthrough in talks with Manchester United.

The England international excelled on loan in Serie A last season and United were said to be demanding a £20million fee. However, the report claims the two sides have come to an agreement on a deal worth £18million plus bonuses.

The 28-year-old slipped behind Pontus Jansson and Ethan Pinnock in the centre-half pecking order as the Bees came agonisingly close to promotion last season, and Thomas Frank has already strengthened the position again by signing Northampton skipper Charlie Goode.

All sorts of speculation regarding Gareth Bale’s club future but he is back in international action for Wales tonight. He’s been named in Ryan Giggs’ starting line-up for the Nations League meeting with Finland in Helsinki tonight.

It’ll be the first time Bale’s started a game for anyone since Real Madrid’s win over Mallorca back in June.

The Mail say that West Ham midfielder Grady Diangana will have a medical at West Brom tomorrow ahead of his proposed move to the newly-promoted clubs.

The winger helped the Baggies seal promotion to the top flight by finishing second in the Championship while on loan at the Hawthorns.

West Ham are set to reinvest the £18million raised from his sale, with Brentford’s Said Benrahama a target.

Leicester have completed the signing of Atalanta full-back Timothy Castagne in a deal worth a reported £21.5million.

The Foxes sold England left-back Ben Chilwell to Chelsea last week and the Belgian international comes in as a direct replacement, signing a five-year deal at the King Power.

Robertson: I don’t want Messi in the Prem!

City are likely to be Liverpool’s main rivals as they look to defend their Premier League title and Robertson would rather they were not strengthened by the arrival of the six-time Ballon d’Or winner.

“I think Liverpool have ruled out that we could sign him so I don’t want him anywhere near the Premier League and hopefully it stays that way,” Robertson said. “I’ve played against him twice and it’s the hardest games I’ve ever played.”

Chelsea rejected the chance to sign Miralem Pjanic as part of a swap deal with Juventus involving Jorginho this summer.

That’s according to the Chelsea midfielder’s agent, Joao Santos:

“Juventus had offered a swap deal including Miralem Pjanic, but the English side didn’t take it into consideration,” he told Tuttomercatoweb.

“[Juve sporting director Fabio] Paratici never called me. Would he have moved to Juventus with Sarri? I think so.”

Pjanic instead joined Barcelona, with Brazilian midfielder Arthur Melo heading in the opposite direction.

​Various reports out of Italy this evening are claiming that Lucas Torreira is on his way to Fiorentina.

The suggestion is that the Serie A club will pay an initial €8million loan fee before paying €16m to make the move permanent next summer.

Italian outlet Gazzetta dello Sport say Roma full-back Aleksandar Kolarov will have a medical at Inter Milan next week ahead of a proposed move.

The former Manchester City man is reportedly set to sign a one-year deal with the option of an extra year after that, with Inter to pay €1.5million to sign him.

Liverpool midfielder Gini Wijnaldum was giving nothing away when asked about speculation linking him with a move to Barcelona this summer.

With Thiago Alcantara reportedly set to arrive at Anfield, there has been talk that Wijnaldum could follow Dutch national team boss Ronald Koeman to the Nou Camp.

However, when asked about that possibility whilst on international duty, he said: “It’s a rumour, I have nothing to say about it.”

Well this one is a bit of a surprise… Felipe Anderson has been linked with a move to Arsenal.

According to Football Insider, Mikel Arteta is an admirer of the 27-year-old West Ham playmaker, who struggled to find his best form last season.

Should West Ham actually be interested in selling Anderson, then they would be looking to recoup as much of the £42m fee they paid Lazio in 2018. That may be beyond Arsenal, but a windfall from selling Hector Bellerin could perhaps tempt the Hammers as David Moyes reshapes his squad.

Sergio Reguilon’s future has been the subject of much speculation this summer, and it appears as though Manchester United could be in with a shout.

According to Spanish outlet AS, United have made a ‘very interesting’ transfer proposal for the 23-year-old Real Madrid left-back, who would be available for between £20-£30million.

United are relatively well stocked at left-back with Luke Shaw and Brandon Williams, but Shaw’s injury issues have continued.

On top of that, competition for Aaron Wan-Bissaka on the right flank would seem a bigger priority than strengthening the left side – but if Reguilon is seen as a potential starter by Solskjaer, Williams could well be loaned out to develop more experience in the Premier League.

Sokratis a target for Napoli

Arsenal have plenty of centre-backs on the books, and Sokratis Papastathopoulos looks like he could be one of the players on his way out.

Napoli are interested in signing the Gunners defender, with club president Aurelio De Laurentiis saying: “We’re working to get Sokratis Papastathopoulos from Arsenal, we’re considering him as an option.”

Napoli signing Sokratis could also potentially unlock a deal for Man City to sign Kalidou Koulibaly, with De Laurentiis adding: “Koulibaly? I’m ready to sell him if some club will submit the right bid.”