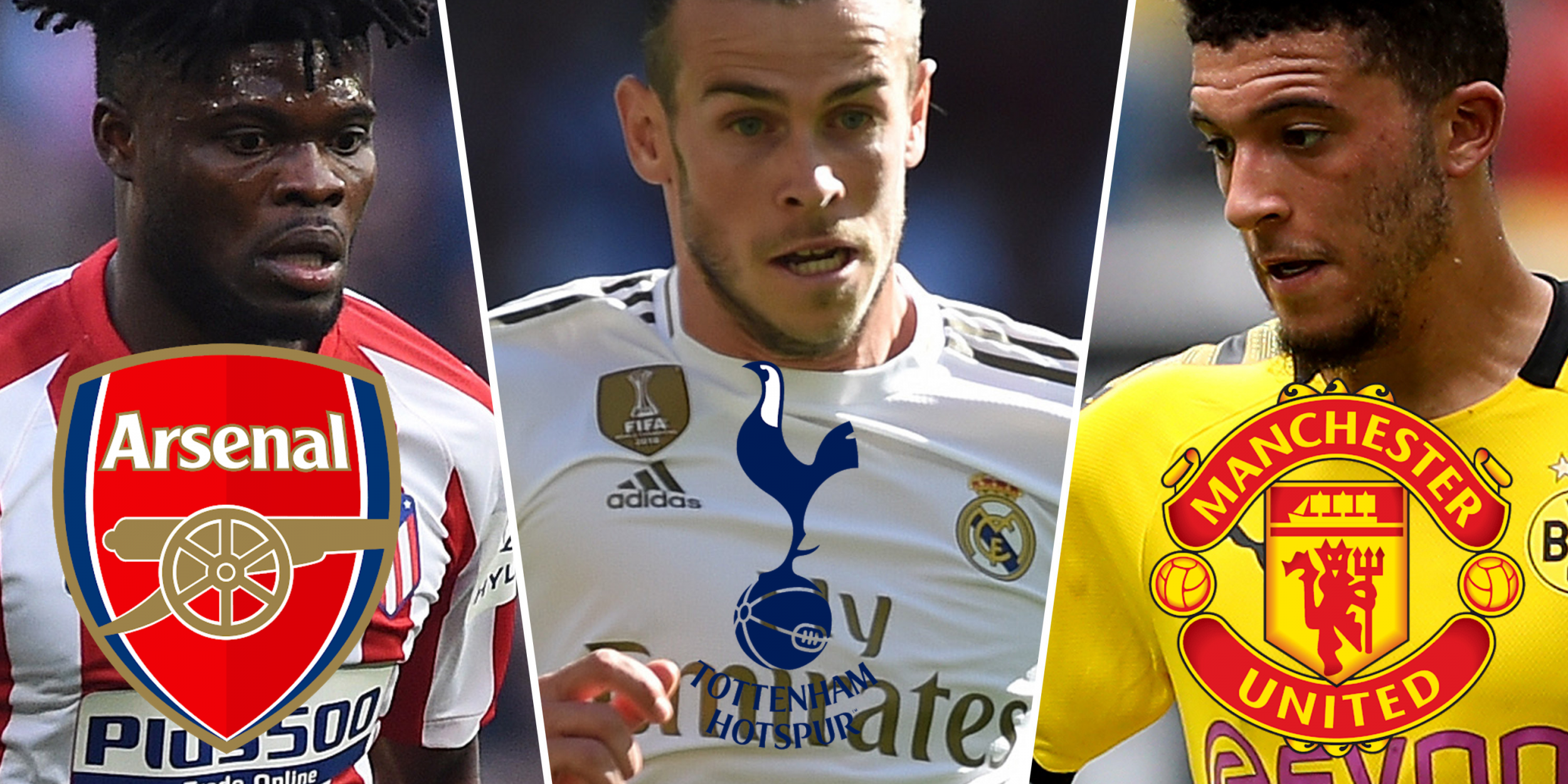 Talking of Jadon Sancho, Manchester United fear they will face increased competition for his signature next summer if they can’t strike a deal before October’s deadline, according to ESPN.


Manchester United have added Atalanta’s Amad Traore to their list of right-wing targets, report the Mirror.


Watford defender Pervis Estupinan has joined Villarreal for an initial fee of £15million.

The Ecuador international joined Watford in 2016 from LDU Quito but was sent out on loan to gain experience and a work permit. The left-back has since flourished in Spain during loans with Granada, Almeria, Mallorca and most recently Osasuna.

Estupinan’s form in LaLiga unsurprisingly attracted great interest in the 22-year-old and he has now left Watford after they were relegated to the Championship.

The Hornets have, however, banked a fee of £15m for a player who did not make a single first-team appearance for them.

There has been no talk about Gareth Bale’s potential return to Tottenham among the players, says Eric Dier.

He told reporters: “No, nothing on the WhatsApp group. Obviously there’s a lot of speculation and it’s not for me to speculate on.”

He added: “I’m sure from the fans’ point of view it’s very exciting to be linked with a player of that level. It doesn’t affect me personally. It’s not the first time there’s been a player linked with going here or there.”

Tottenham manager Jose Mourinho has refused to comment on the club’s attempts to re-sign Gareth Bale.

The Real Madrid winger’s representatives are working on a deal to take Bale back to Spurs.

But ahead of his side’s Europa League second-round qualifying clash with Lokomotiv Plovdiv, Mourinho said: “Gareth Bale is a Real Madrid player and I don’t comment on players from other clubs.

“That is not my job to have contacts with agents. I don’t want to comment on that.”

Bale was always seen as a back up to top target Jadon Sancho, whose proposed transfer from Borussia Dortmund has reached an impasse over the German club’s £108million valuation.

Wales international Bale is now set to rejoin Spurs on loan seven years after leaving them for Real Madrid in a world record deal.

United were prepared to discuss a short-term move for the 31-year-old after learning of Real’s determination to offload him this summer.

But despite him being a long-term target for executive vice chairman Ed Woodward, it’s understood the Old Trafford club never drove negotiations – instead considering him one of a number of alternatives to Sancho.

Ivan Perisic and Douglas Costa remain under consideration – but Sancho is still Solskjaer’s overwhelming priority before the window closes next month.

What Bale said about Jose hire

Gareth Bale hailed the appointment of ‘serial winner’ Jose Mourinho when the Portuguese took the reins at Tottenham last season.

“Having [Jose] Mourinho there is an amazing statement from the club, I think he’s a serial winner,” Bale told BT Sport in December last year.

“Tottenham want to win trophies and I don’t think there’s a better partnership than Mourinho and Tottenham together to try and win some trophies.”

Tottenham remain locked in talks over a sensational deal to re-sign Gareth Bale from Real Madrid.

Daniel Levy, the Spurs chairman, is leading negotiations with Real and Bale’s agent Jonathan Barnett, with optimism on all sides of completing the biggest transfer of the summer.

Any move is dependent on Real agreeing to subsidise at least half of Bale’s reported £600,000-a-week wages, which the Spanish giants are reluctantly willing to do.

A loan deal is looking most likely, although Real have pushed for a permanent transfer as they look to offload their highest earner, who has two years remaining on his contract.

Dele Alli was reportedly among those offered to Real as a makeweight but any deal for the 31-year-old is not set to include any players in part-exchange.

On the Spurs side, the deal is being driven by Levy, who brokered a then world-record £85million fee for Bale to join Real in summer 2013, having signed him as a 17-year-old from Sunday’s opponents Southampton.

Martinez shone for the Gunners during the end of last season after being forced to step up following a knee injury to No1 Bernd Leno.

The Argentina international helped Arsenal win a record 14th FA Cup, but has now joined Villa on a four-year deal as he goes after regular first-team football.

Villa boss Dean Smith said: “We are really pleased with the signing of our new goalkeeper Emiliano Martinez.

“We know how highly Arsenal rated him and we watched his outstanding performances last season in a trophy-winning top side.

“We moved for Emi when we saw the opportunity, as it is rare to be able to buy a top class goalkeeper who hasn’t yet reached their peak age and who can therefore be a key player for our Club for the long term.”

Tottenham to miss out on Sorloth

Tottenham have lost out on a deal for Alexander Sorloth, according to The Times.

Sorloth is expected to join RB Leipzig for about £25 million from Crystal Palace.

Arsenal are still in the market for reinforcements after finally tying down Pierre-Emerick Aubameyang to a new deal, according to The Mirror.

Aubameyang has committed to a new three-year deal and now Mikel Arteta is focused on bringing in the cash to sign two more midfielders.

The Gunners still want Atletico Madrid midfielder Thomas Partey, who is keen to join, but must raise in excess of £50m to prise him away. They are also in for Lyon playmaker Houssem Aouar.

There is optimism on all sides that Gareth Bale, 31, will become a Tottenham player again, according to David Ornstein at The Athletic.

Sergio Reguilon has agreed personal terms with Tottenham, according to Fabrizio Romano.

Spurs and Real Madrid have reportedly reached an agreement in the last few hours over a €30m deal for the left-back.

Reguilon has agreed to join Tottenham after also holding talks with Manchester United.

Bayern back in for Hudson-Odoi

Chelsea are closing in on the signing of Edouard Mendy, according to RMC Sport.

The Blues are expected to pay around £18million for Mendy but a deal between the two clubs has still not been reached.

The player is eager to move and ready to fly to London to complete the deal once he gets the green light.

He has already agreed a five-year deal with the Blues as Frank Lampard aims to bring in top-level competition for Kepa.

Barca must sell before they buy

Barcelona boss Ronaldo Koeman is going after Memphis Depay but knows he must raise the funds before a deal can be completed.

Lyon president Jean-Michel Aulas has suggested Barca’s move for Depay has hit a stumbling block because of coronavirus-related financial problems.

And Koeman has since admitted: “We need to sell players before we can sign Depay”.

It has left the former Manchester United man in limbo.

Branislav Ivanovic says he has plenty to offer West Brom after the 36-year-old free agent joined the promoted Premier League side on a season-long deal.

Ivanovic made more than 350 appearances for Chelsea and won nine major titles with the London club before leaving for Russian side Zenit Saint Petersburg in 2017.

“I know Slaven from before. He’s amazing and I hope together we’re going to be a success. He understands football and looks like a guy who everyone wants to play for.

“I missed English football … I looked to be back in the previous year but it didn’t happen, so now I’m happy to be here and I’ll try and do my best. I can give something more. I’m completely different… I’m ready for the challenge.”

The Special One and the special partnership

When Luka Modric left Tottenham to sign for Real Madrid in the summer of 2012, Spurs chairman Daniel Levy announced a “special partnership” with the Spanish giants.

Levy said he hoped the two clubs would share a “long and productive relationship”, but the benefits of the agreement were never seen in north London. Instead, Gareth Bale followed Modric from White Hart Lane to the Santiago Bernabeu 12 months later.

Seven years down the line, the “partnership” has long been forgotten by most, but those cordial terms may well have helped Spurs in their sensational bid to bring back Bale and also sign left-back Sergio Reguilon.

Jose Mourinho is also likely to have played a pivotal part in the double deal.

Click here for the full read from our Spain correspondent, Ben Hayward, on why the “special partnership” is finally bearing fruit.