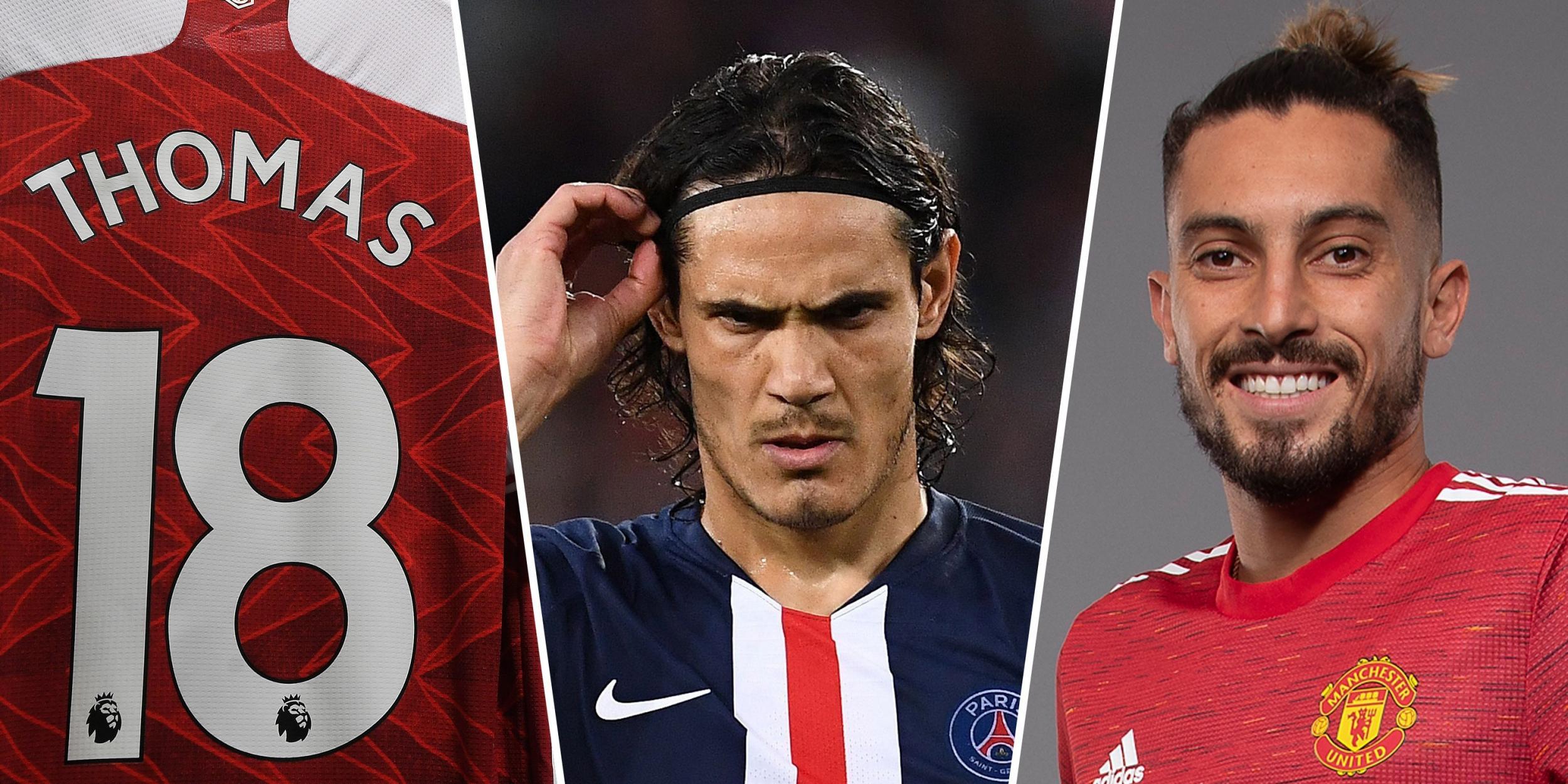 Clubs in the UK will have until 5pm on Friday October 16 to complete domestic transfers, but the big moves had to be completed by 11pm BST on Monday.

Arsenal sealed a dramatic late deal for Thomas Partey after triggering his £45million release clause, following the news that Houssem Aouar would be staying at Lyon for another season.

Guendouzi speaks out on Arsenal exit

Arsenal midfielder Matteo Guendouzi has spoken out of his exit after joining Hertha Berlin on a season-long loan.

The Frenchman has not made a single appearance since his clash with Neal Maupay in Arsenal’s 2-1 loss to Brighton in June.

“The discussions with those responsible convinced me [to join],” Guendouzi said, as per The Mirror.

“I don’t just want to develop personally, but help the whole association to take the next step. I’m buzzing to start life in Berlin as a Hertha player.”

Kepa Arrizabalaga insists he is “confident” he can turn his Chelsea career around.

The Spaniard has fallen out of favour under Frank Lampard, who has instantly made new-signing Edouard Mendy his No.1 choice.

Kepa is refusing to go down without a fight, however, telling journalists in a Spain press conference: “I am confident to turn the situation around.

“When I have the opportunity to play I will try to do it the best possible.”

Saliba could head out on loan yet

Arsenal defender William Saliba could still leave on loan to a Championship club, according to PA Sports News.

However, the EFL window doesn’t shut until October 15, meaning Saliba could yet leave.

The midfielder, 28, has been without a club since he left Borussia Dortmund in June and, despite the window closing on Monday, he can still sign for a new club.

Hertha are now considering a move for the World Cup winner, but are unsure due to concerns over his fitness and recent form.

West Ham forward Felipe Anderson could yet leave on loan to Porto with the transfer window in Portugal open until October 25.

The winger has found himself on the periphery of the West Ham squad of late, yet to start a league game this season.

West Ham would likely target a move for Brentford attacker Said Benrahma as a replacement.

Tomori changed his mind at the 11th hour despite West Ham agreeing terms with Chelsea, who were happy for the 22-year-old to leave after it became clear Antonio Rudier was going nowhere.

The Hammers have had a number of offers rebuffed at home and across Europe, so they will now take their search into the Championship, with Premier League clubs still able to sign players from the lower divisions until October 16.

Dawson would be available for a nominal fee, with the Hornets preferring a permanent deal to get his wages off their books.

Joel Ideho has been handed his first professional contract with Arsenal at the age of 17.

The pacey winger played much of his youth football with the Tilburg Academy of Willem II, before the Dutchman joined Ajax earlier this year.

The midfielder has struggled to get back into Frank Lampard’s side after a long injury lay-off and is in need of consistent game-time if he is to be in Gareth Southgate’s England plans.

Loftus-Cheek, who completed a season-long loan, was one of three deadline-day signings for Scott Parker, with centre-backs Joachim Andersen and Tosin Adarabioyo also arriving.

The 24-year-old said: “With this manager, I think I can get back to my best football.”

Man Utd to go for Sancho in January

Manchester United have not given up on Jadon Sancho just yet, report The Sun, who claim they will go back in for the Borussia Dortmund man in January.

Sancho was Ole Gunnar Solskjaer’s primary target this summer, and though the winger reportedly wanted to join the club, they never met Dortmund’s £108million valuation.

United are now willing to re-open their negotiations with the German giants in January.

Ousmane Dembele is reportedly unhappy with Barcelona after they blocked a potential move to Manchester United.

The Daily Star report the Frenchman was on United’s list of targets, but the Catalan giants’ demands proved too much for the Manchester club.

United had prioritised a move for Jadon Sancho, which also failed to come to fruition after months of speculation.

Arsenal fans can now purchase the 2020/21 home, away and third kits with ‘Thomas’ on the back, while customised training gear is also on offer.

The wait to see Partey in action will be slightly more arduous, however. With the international break now taking over, Arsenal fans will have to wait until October 17 to see their new man in action.

And the midfielder will certainly have to adapt the life in the Premier League quickly, with an enticing trip to Manchester City coming up next.

Danny Welbeck has agreed a contract termination with Watford.

The former England international is now a free agent and able to discuss terms with a new club.

Saint-Etienne run out of time in Saliba loan bid

Saint-Etienne have confirmed they were beaten by the clock in their attempts to sign William Saliba on loan from Arsenal on deadline day.

The Gunners were open to loaning the 19-year-old defender in order for him to gain more experience.

Fulham had shown an interest in the Frenchman, as had Rennes, but Saint-Etienne have revealed it was they who were closer to striking a deal.

“Long before the transfer window closed, AS Saint-Étienne had struck a deal with William Saliba and accepted Arsenal’s offer for a one-season loan,” read a statement from the French club.

“Unfortunately, all the administrative conditions could not be met in time in England for the finalisation of the case. The disappointment is great for ASSE and William Saliba, particularly determined to return to the club where he had flourished.”

Rose to stay at Spurs until January

Danny Rose is expected to stay at Spurs until January after failing to seal a deadline day move.

Porto showed late interest in Rose as a replacement for Alex Telles, who joined Manchester United, but it is thought the Portuguese club could not afford a deal, even on loan.

Rose has been stripped of a squad number and is not training with the first team.

Manchester United have held negotiations over the £45million-rated Ismaila Sarr – a player they scouted extensively during his time at Rennes – as a contingency plan during the protracted Jadon Sancho saga.

However, United’s insistence on a loan deal is not currently of interest to Watford.

The closure of the international window does not necessarily spell the end as far as United’s interest in Sarr is concerned, with the October 16 EFL deadline still 10 days away.

United hoped Borussia Dortmund would buckle in talks over Jadon Sancho and as such were reluctant to make a firm move for one of their alternatives.

With Sancho now staying at Dortmund for the time being, Sarr could prove a decent stopgap but Watford are unwilling to agree a loan deal as things stand.

Tottenham are pursuing a deal for Swansea City centre-half Joe Rodon but the clubs remain some way apart in their valuations of the Wales international.

Rodon emerged as a defensive target after Spurs abandoned moves for Milan Skriniar of Inter Milan and Chelsea’s Antonio Rudiger, but the Premier League club are reluctant to meet Swansea’s £18million asking price.

Spurs value the 22-year-old at closer to £7m but they are hopeful of reaching a compromise with the Swans.
Tottenham have until the domestic window closes on October 16 to wrap up a deal.

The Seagulls have completed a five-year deal to sign midfielder Moder from Lech Poznan, with the 21-year-old loaned immediately back to the Polish club.

Legia Warsaw defender Karbownik, 19, has joined on a four-year deal and has also been loaned straight back for the rest of the season.

Midfielder Moder boasts one full Poland cap, with Brighton excited by his potential.

Arsenal activated the Ghanaian’s £45million release clause to seal a late move for the 27-year-old, having tracked the midfielder all summer.

The Gunners confirmed on Monday night that Partey would wear the No18 jersey, previously worn in the Premier League by Nacho Monreal, having been vacant since the Spaniard left the club.

The deal did not have to be completed by Monday’s 11pm deadline as the Portuguese window remains open for another three weeks.

Anderson has two years left on his current deal at West Ham.

West Ham will now go shopping in the Championship as their search for defensive reinforcements continues.

Despite Sunday’s superb display at Leicester, assistant manager Alan Irvine says the Hammers are still short of numbers at the back.

Premier League clubs are still able to sign from the Football League – a favoured hunting ground of manager David Moyes – until October 16, and West Ham are interested in both Watford’s Craig Dawson and Swansea’s Joe Rodon.