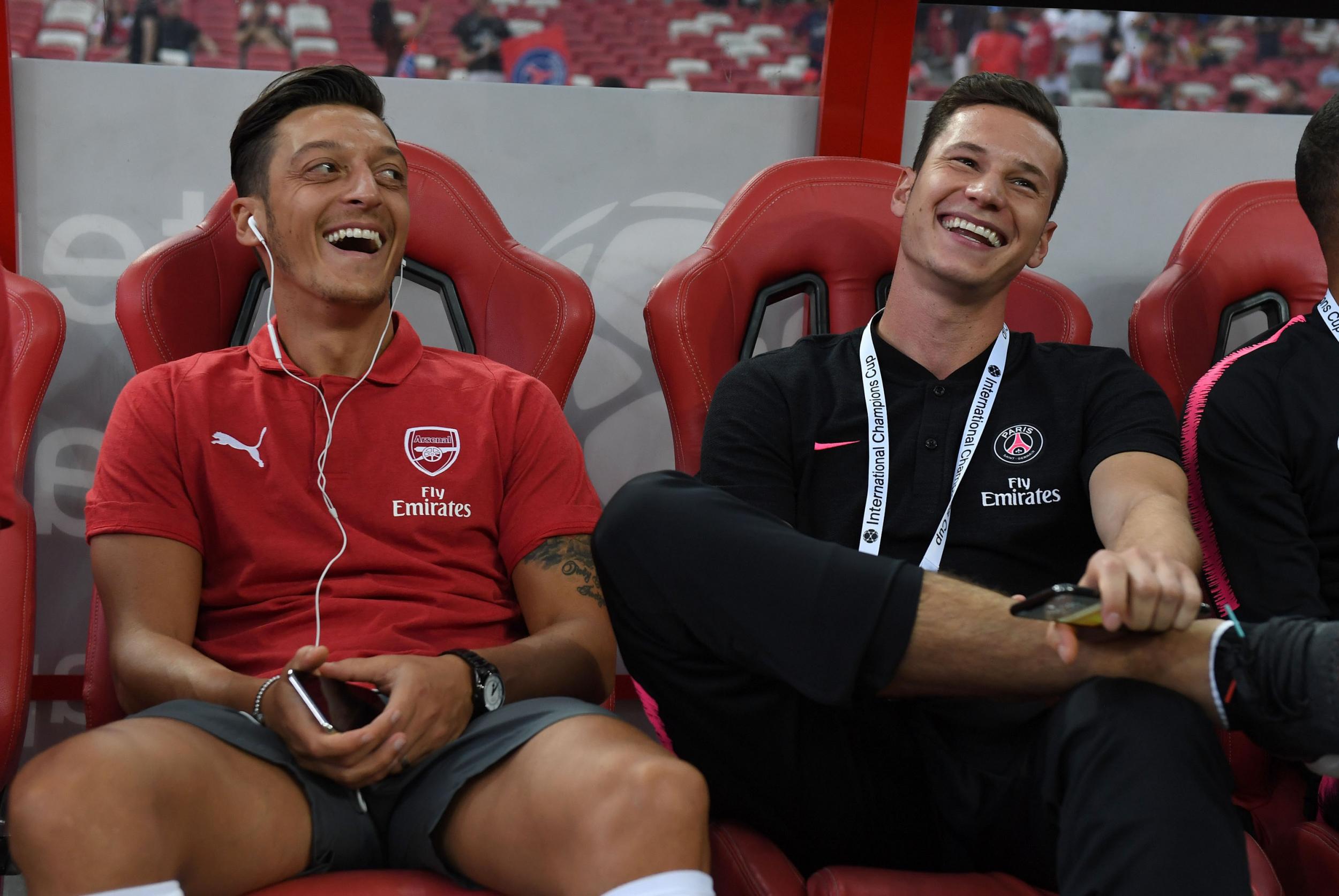 Liverpool are biding their time in pursuit of Thiago Alcantara, while Real Madrid seem more determined that ever to move Gareth Bale on this summer.

The 26-year-old striker has just one year left on his contract with the Serie A side and while he has been linked with a switch to Juventus, Corriere dello Sport also report he is now looking outside of Italy for his next club.

Paris Saint-Germain are ready to offer Julian Draxler to Arsenal as a makeweight in a deal for Matteo Guendouzi, according to reports in France.

Arsenal are willing to offload Guendouzi as they bid to fund moves for Atletico Madrid’s Thomas Partey and Houssem Aouar, of Lyon.

The Gunners are also reluctantly ready to sell Hector Bellerin, with PSG leading the race to sign him.

Stretty News report the 15-year-old, who broke an 81-year record to become the Spanish top flight’s youngest ever player in June, is on United’s radar.

Already this summer, United have poached talents from Barcelona and Real Madrid in Alvaro Fernandez and Marc Jurado from Real Madrid and Barcelona respectively while reports suggest they have agreed a five-year deal to sign  Alejandro Garnacho from Atletico Madrid.

Paris Saint-Germain are eager to sign Hector Bellerin from Arsenal this summer but Barcelona could also be in that particular race.

Diario Sport report Barca are keen to strengthen at right-back and are ready to replace Nelson Semedo this summer.

Bellerin, who left the Barca academy for the Gunners as a teenager, is the man they have identified to step in.

The report adds Barcelona’s sporting team have already met with Gunners sporting director Edu regarding a move and there is a belief that a deal can be done for between €20m-25m.

No offers for Umtiti

Barcelona are still to receive an offer for Samuel Umtiti.

Diario Sport report Barca are still waiting for interest in the Frenchman to warm up with the club eager to get him off their books.

Manchester City are asking for €18m for defender Eric Garcia amid interest from Barcelona, according to reports.

City are said to value the Spaniard at €40m but with just one year left on his deal at the Etihad and with the player informing the club he does not want to renew, that number has been revised.

Mundo Deportivo report Barcelona’s opening offer is set to be in the region of €15m.

Manchester United midfielder James Garner is in talks over a move to Huddersfield on loan.

ESPN report the 19-year-old, highly-regarded at Old Trafford with seven first-team appearances under his belt, has been made available this season with the Terriers leading the way.

Lyon insist they have recieved no offer from Barcelona for Memphis Depay.

Reports on Wednesday claimed the Dutchman has agreed terms over a move to the Camp Nou to link up with fellow Dutchman Ronald Koeman.

But Lyon boss Rudi Garcia says they are still waiting on a bid. “Memphis played very well in our first league game.

“He then played two games for the Netherlands and that’s good because he needed those games. We now need to look after him and see what we can do with him for Friday.

“There’s no reason why he won’t be in the squad for the Bordeaux game. I have no news of any offer for him.”

While Man City are also in the race, Fabrizio Romano reports Arsenal are preparing a new bid for Houssem Aouar having seen an opening offer of £31.2m turned down.

Arsenal remain in talks with the player’s agent ahead of an improved bid but Lyon are determined to hold out for £54m.

United have other priorities before Reguilon

United have been made aware of the left-back’s availability after a fine season on loan at Sevilla with Ole Gunnar Solskjaer a fan.

However, ESPN report United’s immediate priority is to strengthen their forward line.

Alexandre Lacazette will seek clarification over his role at Arsenal, ESPN report.

The France international has been linked with a move away throughout 2020 with Atletico Madrid and Juventus thought to be interested in his services.

Lacazette has not agitated for a move with the club with Mikel Arteta eager to keep him part of the squad.

Arsenal are demanding £20m for goalkeeper Emiliano Martinez, according to The Mirror.

The report claims Aston Villa are hoping to sign the Argentine who is ready to move on from north London in search of first team football.

Arsenal and Manchester City are set to go head-to-head in pursuit of Lyon midfielder Houssem Aouar.

The Mirror reports that both clubs are interested in signing the 22-year-old Frenchman.

Spurs are said to be in the market for striking cover for Harry Kane, but have been unsuccessful so far in achieving this long-term goal.

Deals for Vincent Janssen and Fernando Llorente have not worked for the club, but now they are said to be monitoring Daka’s situation in Austria, according to Football.London.

Real Madrid are prepared to offset Gareth Bale’s wages in order to secure his departure this summer.

The Telegraph reports that Real Madrid are prepared to pay over 50% of the Wales international’s salary in order for him to leave the Spanish capital.

That will alert Premier League clubs, with Tottenham have been linked with a move to bring their former star back to north London.

Chelsea are in formal talks with Rennes over a deal to sign goalkeeper Edouard Mendy.

Frank Lampard wants to sign a new goalkeeper after losing faith in Kepa Arrizabalaga and has identified 28-year-old Mendy as his no1 target.

Mendy, a Senegal international who helped Rennes qualify for the Champions League last season, has told the French club he wants to join Chelsea.

Rennes president Nicolas Holveck has confirmed they are in talks with Chelsea over a deal as the Blues prepare to take their summer spending to around £250million.

Holveck said: “Discussions have started with Chelsea for Edouard Mendy. I can understand his desire, he told us. But for the moment, there is no agreement and for a transfer, we need an agreement of the three parties.”

Hector Bellerin could soon be waving goodbye to Arsenal, with Barcelona and PSG said to be interested.

Spanish publication, Sport, reports that Barcelona have approached Arsenal about Bellerin’s availability, while there is interest in France, too.

According to The Independent, Paris Saint-Germain have already made contact with Bellerin’s representatives, with Arsenal prepared to sell the right-back for a fee of around £35m as they look to raise the necessary funds to sign a new midfielder.

Will Swansea pull off a significant coup by securing the return of Rhian Brewster for the 2020-21 season?

The Liverpool youngster shone in south Wales last term, scoring 11 goals in 22 appearances and helping Steve Cooper’s side to reach the Championship play-offs.

Some fans have called for Brewster to take on a regular first-team role at Anfield during the forthcoming campaign, while several Premier League clubs have also been linked with a permanent move for his services.

According to The Telegraph, a return to Swansea on loan could be possible with a number of those suitors landing other targets, though a deal worth £25m could still be struck with someone.

Troy Deeney is reportedly poised to leave Watford after 10 years before the end of the current transfer window.

The Mail claim that the Hornets will listen to offers for their long-serving captain and do not wish to deny him a return to the Premier League following their relegation in 2019-20.

A potential season-long loan deal is mentioned for Deeney, who has previously been linked with the likes of West Brom.

Watford recently completed the loan signing of Glenn Murray from Brighton as they look to escape the Championship at the first attempt.