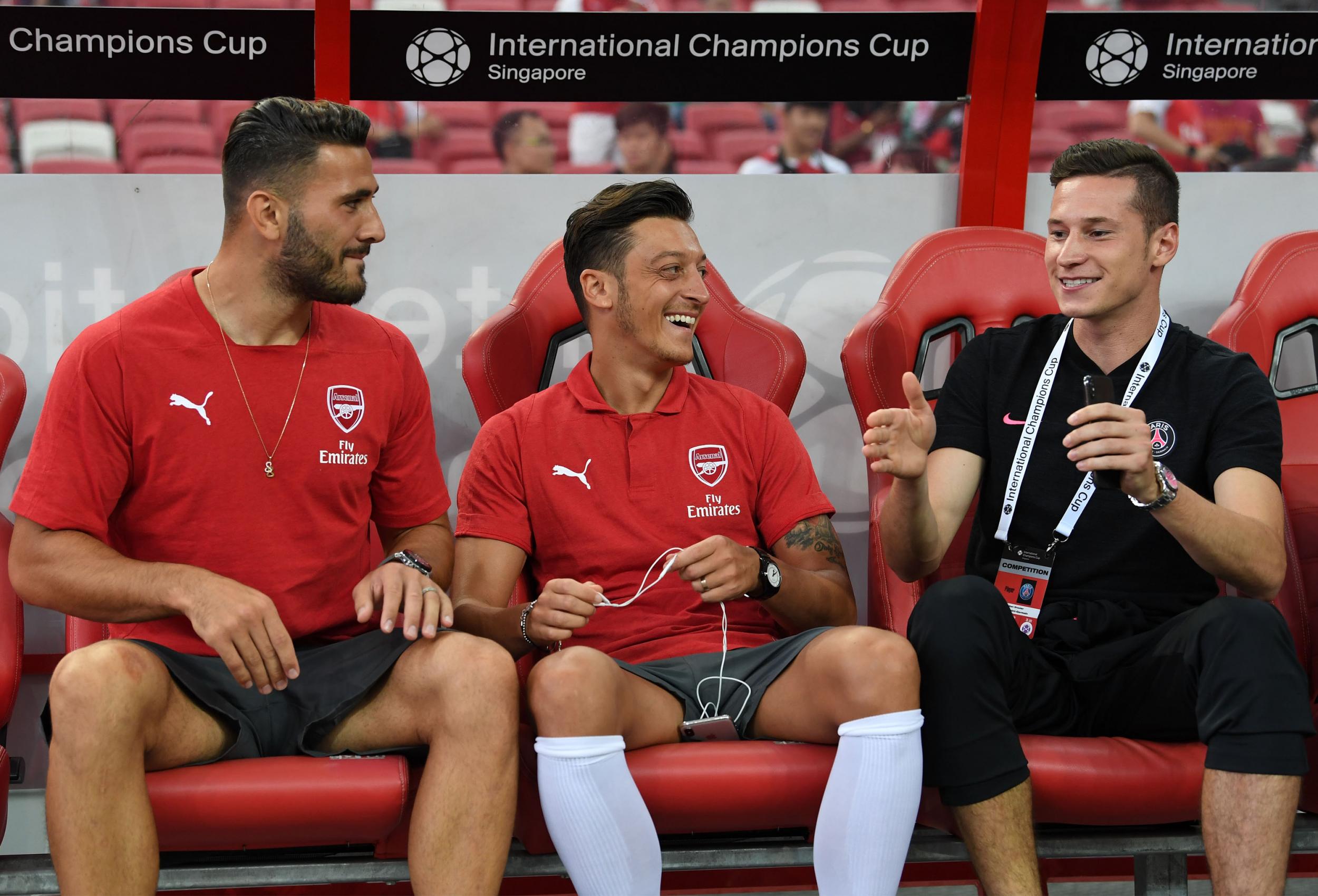 Liverpool are biding their time in pursuit of Thiago Alcantara, while Real Madrid seem more determined that ever to move Gareth Bale on this summer.

Michy Batshuayi is expecting a lot of himself after returning to Crystal Palace.

The Chelsea striker has penned a contract extension with the Blues before returning to Palace on loan until the end of the season.

Batshuayi, who joins Nathan Ferguson and Eberechi Eze as Palace’s new additions this summer, spent the second half of the 2018-19 season at Selhurst Park, scoring six goals in 13 appearances.

The Belgian international has been sidelined at Chelsea since February and is desperate to deliver this season.

“I feel like I’m home now, so it’s good,” Batshuayi said. “But I need to do a good season here, to work a lot with my team-mates and I want to do my best here.

“It’s not my first time here. I know the team-mates, I know the gaffer, I know how the club works here. For me, it’s the best decision.

“I’m happy, the coach is happy, my team-mates are happy. Let’s get to work.”

Roy Hodgson has been keen to add goalscoring threat to his side this summer and is confident Batshuayi will deliver.

“I am very happy we have secured Michy on a season-long loan,” said the Eagles boss.

“He made a great impact at the club in his previous loan spell, albeit only five months long, displaying a goal scoring threat which we very much needed at that time and we are confident he will produce again.

“As a player who will help to convert our chances in to goals, Michy will be another valuable addition to the two new signings we have made this summer. It’s another boost for the players and fans alike, and I’m sure everyone will join me in saying welcome back Michy.”

Crystal Palace are not the only London club to get a deal over the line this evening.

Fulham have continued their post-promotion recruitment drive with the signing of Kenny Tete from Lyon.

The Dutch international right-back has signed a four-year contract at Craven Cottage that includes the option for a further 12 months.

The fee is officially undisclosed but believed to be around £3m.

“It is a great feeling. I feel blessed to be here,” Tete told FFCtv. “I cannot wait to start my new journey and meet my new team-mates.

“I heard of Fulham’s interest and I was bowled over. I spoke with people around me and knew quickly I wanted to leave Lyon and join Fulham.

“The team is back in the Premier League now and I will give 100 percent to keep us there.”

Former Chelsea defender Ola Aina is also expected to sign for Fulham shortly after a loan deal with an £11m option to buy was reportedly agreed with Torino.

Crystal Palace have confirmed the signing of Michy Batshuayi on loan from Chelsea.

The Belgium international has sealed a move to Selhurst Park for the second time in his career, though confirmation of an expected 12-month contract extension with his parent club has not yet been forthcoming.

During his previous spell at Palace, Batshuayi bagged six goals in 13 appearances and Roy Hodgson is now looking to the 26-year-old to solve his side’s goalscoring woes.

The deal does however mean that Palace are unable to loan Blues midfielder Conor Gallagher, who had already undergone a medical with the Eagles, due to Premier League laws dictating that no club can loan two players from the same top-flight side.

It was reported in Germany that Mount is unhappy about the increased competition at Stamford Bridge following the arrivals of Havertz and Hakim Ziyech.

But Lampard said: “I saw the story about Mason Mount. It was absolutely fabricated.”

But Lampard has told them it is part and parcel of being at a club like Chelsea and wants them to embrace it.

Lampard said: “The way football is at a club like Chelsea, if you are a young player who has got a foot in and then the club brings in players around you that raise levels, the players should and hopefully will raise their levels and everybody improves.

Fikayo Tomori’s exit from Chelsea on loan is not imminent, according to manager Frank Lampard.

Reports over recent days suggested that the versatile young Blues defender would spend the 2020-21 campaign working under Carlo Ancelotti at Everton.

However, Lampard insists that no talks have progressed to such an advanced stage and said Tomori was in contention to feature for Chelsea during the early stages of the new campaign.

“With Fikayo, no, I’m not aware of those conversations getting to any point where I’m going to be talking about that,” he said.

“Fikayo trained with us today and is in contention for the Brighton game, and that’s where we’re at.

“There’s nothing specific I want him to improve, all I want him to do is work hard, show the work ethic he’s shown me at Derby and for major parts of last season.

“I hope every player knows at that point I’m fair in how I try to pick the team.

“With four centre-backs last year, two will be unhappy pretty much every week, it’s up to them to try and make a starting place their own, and those are just the rules at a club like Chelsea.”

The 20-year-old will spend the 2020-21 campaign in the Eredivisie as he attempts to move on from a frustrating period in his career.

Injuries have severely disrupted loan stints with Sheffield United and Oxford across the last two seasons, and it is hoped Woodburn can get back on track in the Netherlands.

He heads to Rotterdam on the recommendation of the Reds’ Dutch assistant coach, Pepijn Lijnders.

Woodburn first burst onto the scene in 2016, when he became Liverpool’s youngest ever goalscorer by netting against Leeds United in an EFL Cup tie at the age of just 17 years and 45 days.

Less than a year later, he enjoyed a dream international debut for Wales, scoring a 25-yard stunner to secure a late victory over Austria.

However, his career has since been characterised by struggles for regular football resulting from fitness issues, including breaking both feet in separate incidents while at Oxford last season.

The Wales international will hope to bounce back from those disappointments during his time with Sparta Rotterdam as they look to build on an 11th-placed finish in the Eredivisie last term.

Batshuayi not done yet – Lampard

He told a press conference: “With Michy it is an ongoing situation, not confirmed yet.”

Inter in for Seri?

There are plenty of incomings at Fulham this week but there could be someone leaving with Inter Milan reportedly considering a move for Jean Michael Seri.

Sky Sports repot Inter could turn their attention to him as an alternative to Chelsea’s N’Golo Kante.

Michy Batshuayi has completed his medical ahead of his loan move to Crystal Palace, according to Sky Sports.

Noble has peace talks with West Ham after transfer row

West Ham captain Mark Noble has held peace talks with the Hammers board after hitting out at the club over the sale of Grady Diangana.

Noble spoke to co-owner David Sullivan and vice chair Karren Brady over the phone in an attempt to clear the air after he said he was “gutted, angry and sad” about the decision to sell Diangana to West Brom for £18million.

Noble spoke to Sullivan and Brady on Saturday, who explained the decision was made reluctantly. Sullivan explained they wanted to keep Diangana but needed the money to reinvest in the squad and help fund new signings for manager David Moyes.

The 26-year-old striker has just one year left on his contract with the Serie A side and while he has been linked with a switch to Juventus, Corriere dello Sport also report he is now looking outside of Italy for his next club.

Paris Saint-Germain are ready to offer Julian Draxler to Arsenal as a makeweight in a deal for Matteo Guendouzi, according to reports in France.

Arsenal are willing to offload Guendouzi as they bid to fund moves for Atletico Madrid’s Thomas Partey and Houssem Aouar, of Lyon.

The Gunners are also reluctantly ready to sell Hector Bellerin, with PSG leading the race to sign him.

Stretty News report the 15-year-old, who broke an 81-year record to become the Spanish top flight’s youngest ever player in June, is on United’s radar.

Already this summer, United have poached talents from Barcelona and Real Madrid in Alvaro Fernandez and Marc Jurado from Real Madrid and Barcelona respectively while reports suggest they have agreed a five-year deal to sign  Alejandro Garnacho from Atletico Madrid.

Paris Saint-Germain are eager to sign Hector Bellerin from Arsenal this summer but Barcelona could also be in that particular race.

Diario Sport report Barca are keen to strengthen at right-back and are ready to replace Nelson Semedo this summer.

Bellerin, who left the Barca academy for the Gunners as a teenager, is the man they have identified to step in.

The report adds Barcelona’s sporting team have already met with Gunners sporting director Edu regarding a move and there is a belief that a deal can be done for between €20m-25m.

No offers for Umtiti

Barcelona are still to receive an offer for Samuel Umtiti.

Diario Sport report Barca are still waiting for interest in the Frenchman to warm up with the club eager to get him off their books.

Manchester City are asking for €18m for defender Eric Garcia amid interest from Barcelona, according to reports.

City are said to value the Spaniard at €40m but with just one year left on his deal at the Etihad and with the player informing the club he does not want to renew, that number has been revised.

Mundo Deportivo report Barcelona’s opening offer is set to be in the region of €15m.

Manchester United midfielder James Garner is in talks over a move to Huddersfield on loan.

ESPN report the 19-year-old, highly-regarded at Old Trafford with seven first-team appearances under his belt, has been made available this season with the Terriers leading the way.

Lyon insist they have recieved no offer from Barcelona for Memphis Depay.

Reports on Wednesday claimed the Dutchman has agreed terms over a move to the Camp Nou to link up with fellow Dutchman Ronald Koeman.

But Lyon boss Rudi Garcia says they are still waiting on a bid. “Memphis played very well in our first league game.

“He then played two games for the Netherlands and that’s good because he needed those games. We now need to look after him and see what we can do with him for Friday.

“There’s no reason why he won’t be in the squad for the Bordeaux game. I have no news of any offer for him.”

While Man City are also in the race, Fabrizio Romano reports Arsenal are preparing a new bid for Houssem Aouar having seen an opening offer of £31.2m turned down.

Arsenal remain in talks with the player’s agent ahead of an improved bid but Lyon are determined to hold out for £54m.

United have other priorities before Reguilon

United have been made aware of the left-back’s availability after a fine season on loan at Sevilla with Ole Gunnar Solskjaer a fan.

However, ESPN report United’s immediate priority is to strengthen their forward line.