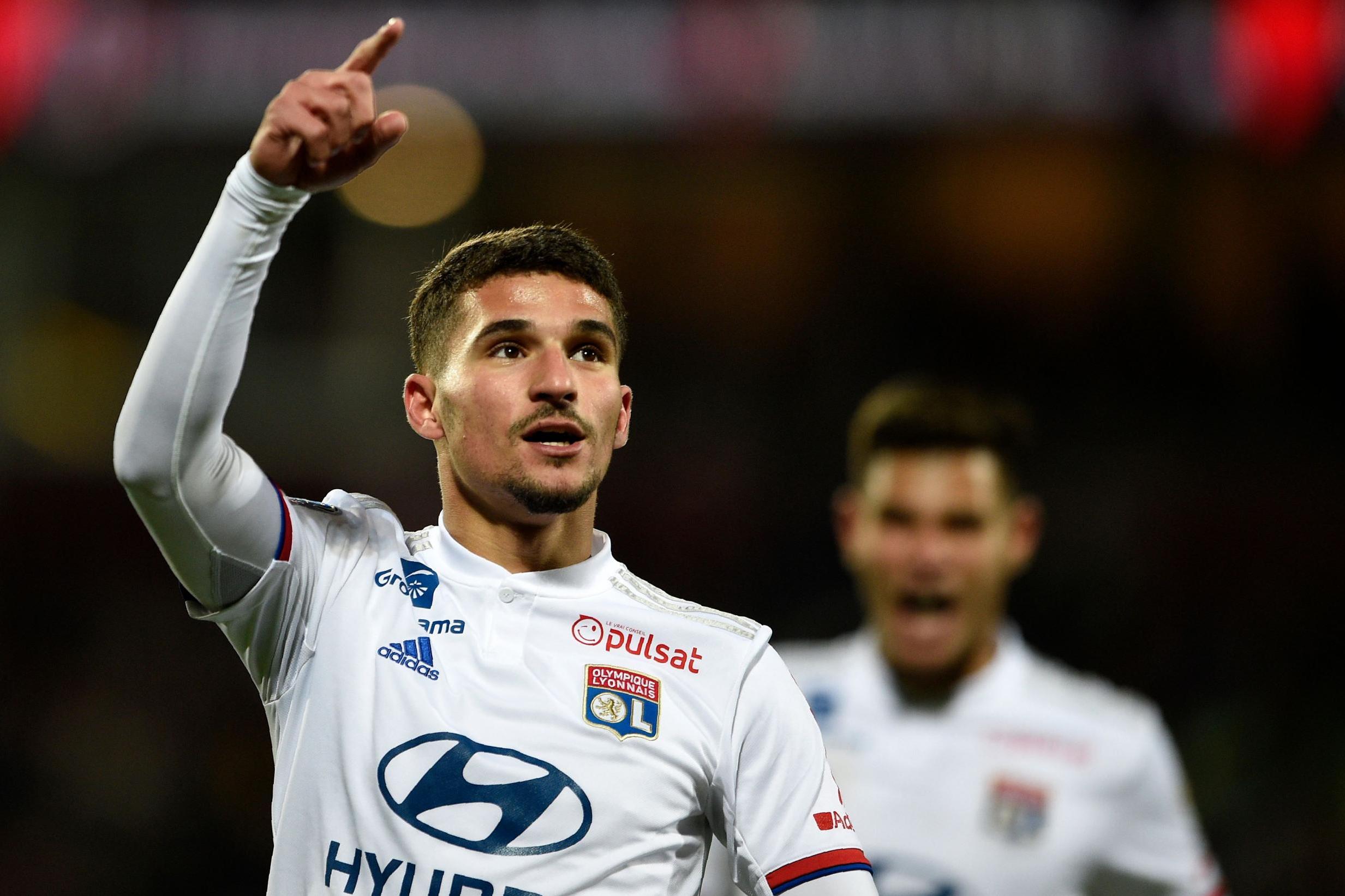 Lyon have rejected a player-plus-cash bid from Arsenal for Houssem Aouar, according to RMC Sport.

Asked about a possible move last month, Aouar said: “I haven’t left yet, so I haven’t asked this question.”

Aurier or Bellerin for Leverkusen

According to The Telegraph, Bayer Leverkusen has narrowed their right-back search down to Tottenham’s Serge Aurier or Arsenal’s Hector Bellerin.

The club are flush having sold Kai Havertz to Chelsea, and Bellerin is understood to cost around £10m more than Aurier.

Pep Guardiola will now turn back to Napoli’s Kalidou Koulibaly, the report add.

City do not want to spend more and believe Napoli will accept a similar fee for Koulibaly.

The former Manchester United winger is reportedly a target for Ronald Koeman, who coached Depay while with the Netherlands squad and wants to take him to Camp Nou.

Garcia told Telefoot: “I read the Catalan press this morning. They talk about Memphis. Memphis is a fantastic player and if he can play the season with Lyon, we will only be stronger.

“But like many of my players, if they have the opportunity to play in a club built to win the Champions League, and he’s met a lot of them last season, I will personally take him in my car.”


Talking of Chelsea and goalkeepers, talks with Rennes over a move for goalkeeper Edouard Mendy remain ongoing, report the Mirror,

Frank Lampard has not been won over by Kepa Arrizabalaga, who remains Chelsea’s club-record signing despite Friday’s arrival of Kai Havertzs.

Mendy is Lampard’s first choice, though Ajax’s Andre Onana and Paris Saint-Germain’s Alphonse Areola have been offered to the club.

Chelsea have completed the capture of young goalkeeper Teddy Sharman-Lowe on a three-year deal from Burton Albion.

The 17-year-old, who has featured for England at Under-17 at level, will be loaned back to the League One outfit for the 2020/21 campaign.

“It’s brilliant and it has all happened so fast,” Sharman-Lowe told the club’s website.

“Burton have developed me so well and now it’s another new beginning and, hopefully, I can develop further with Chelsea.

“I’m excited to be joining such a great club, especially as they are known for bringing on young players.

Arsenal have reportedly discussed the possibility of swapping two players for Thomas Partey.

The Gunners are keen to land Partey this summer but Atleti are adamant his £45million release clause must be met.

Arsenal are unwilling to part with that fee at this time but could raise funds for such a deal as they step up their summer clearout.

However, Arsenal have also proposed a deal which would see both Matteo Guendouzi and Alexandre Lacazette move to the Wanda Metropolitano in exchange for Partey.

“For sure they spoke with Atletico Madrid,” Romano told Lee Gunner on his YouTube channel.

“It was during the meeting they had for Thomas, the first time it was in July. They spoke about Matteo Guendouzi and they spoke also about Lacazette.”

West Ham have made a £27m bid for Burnley defender James Tarkowski, according to The Telegraph.

The Hammers are set to reinvest the £18million they raised selling Grady Diangana to West Brom.

Barcelona’s summer clear-out is now unlikely to include Lionel Messi after the Argentinian revealed he would see out his contract – and that could spell bad news for Antoine Griezmann.

According to The Mail on Sunday, the Blaugrana are keen to rebuild their squad and Griezmann, 29, has struggled to replicate the form he showed at Atletico Madrid since his £107m move.

It is claimed Arsenal and Manchester United are among the clubs monitoring the France international, with Barca coach Ronald Koeman keen to focus on younger talents such as Ansu Fati.

Fulham will be able to make the deal permanent.

Luis Suarez is due to sit a language test on Monday in a bid to obtain Italian citizenship that would enable him to move to Serie A champions Juventus, Italian and Uruguayan media report.

There have been widespread reports that Juventus are chasing the 33-year-old Uruguayan who, if the moves go through, would line up alongside defender Giorgio Chiellini, the Italy defender he famously bit in a World Cup match in 2014.

However, Juventus have already used up their limit of two non-EU signings following the arrival of Brazilian midfielder Arthur Melo and US international Weston McKinney and would only be able to add Suarez if he can obtain an EU passport.

The media reports said that Suarez is eligible for Italian naturalisation as his wife is a citizen of the country, although it was not clear how the process, which usually takes several years, would be completed in one month.

The Uruguayan television programme Polideportivo, as well as several Italian newspapers, said on Sunday that Suarez would take a level B1 Italian test — regarded as lower intermediate and the minimum level required — on Monday.

Paul Pogba is keen on returning to former club Juventus, according to Tuttosport.

The midfielder is reportedly stalling on signing a contract extension with Manchester United, with the hope Juventus will launch a bid in the near future.

Pogba’s current deal is due to expire next summer, though United reportedly have the option to extend it by a further year.

Journalist Fabrizio Romano recently said Pogba was “sure” to return to Juventus this summer before the coronavirus pandemic hit club finances.

Liverpool have watched on as their rivals have strengthened this summer.

Chelsea, in particular, have made a real statement of intent with an unprecedented £200million spending spree, with Kai Havertz (below) and Ben Chilwell among those joining Timo Werner at the Bridge.

Arsenal, too, have reinforced, with Gabriel Magalhaes and Willian arriving, while Tottenham have added Pierre-Emile Højbjerg, Matt Doherty and Joe Hart. Manchester United will reflect on a successful window if they can add Jadon Sancho before the October deadline.

But regardless of all that, Jamie Carragher says the chasing pack have not done enough to trouble either Liverpool or Manchester City in the coming campaign.

“I still see it as Liverpool and City,” he said. “There is too big a gap to bridge for Chelsea and United to gain 25, 30 points.”

Another one through the door at Wolves as they have confirmed the signing of Marcal from Lyon.

The deal is reportedly worth around €2m, and can play at both left-back and centre-back.


Jose Mourinho looks to be finally closing in on that back-up striker he has wanted since arriving.

Bild reported earlier today that Mason Mount was unhappy at the arrival of Kai Havertz, another positional rival for the young midfielder.

Well, Tony Mount, Mason’s dad, has rounded denied that with a brilliant tweet.

That’s that settled, then.

Manchester United are planning a move for RB Leipzig defender Dayot Upamecano next summer, according to The Mail.

The 21-year-old recently signed a new three-year deal, which reportedly includes a release clause that would allow him to leave for £38million in 2021.

Upamecano is now reportedly a top target for United, who are prepared to activate his release clause.

Ronald Koeman is closing in on his first signing as Barcelona boss in fellow Dutchman Memphis Depay.

Thiago Alcantara remains heavily linked with a move to Liverpool but the Bayern Munich star was giving nothing away when quizzed about his future while away on Spain duty.

“According to you guys, I’d be in a different club every year so I’m out of it.

Van de Beek completed his move to Old Trafford on Wednesday, signing a five-year deal with the option of a further year.

A number of sides across the continent were keen on the 23-year-old, including Arsenal, according to van de Beek’s agent.

And speaking to Algemeen Dagblad, Van de Beek revealed he was contacted by his Netherlands teammate and Tottenham forward Bergwijn to see if he would consider moving to north London.

“Steven Bergwijn texted me to see whether I would play for Spurs,” he said.

“But I chose United.”

Van de Beek also explained he decided he was ready to take the next step in his career after a conversation with his agent last weekend.

“I felt ready for the next step. This was the time to go. That is why I was on the phone with my agent last weekend. In the end, there was an agreement.”