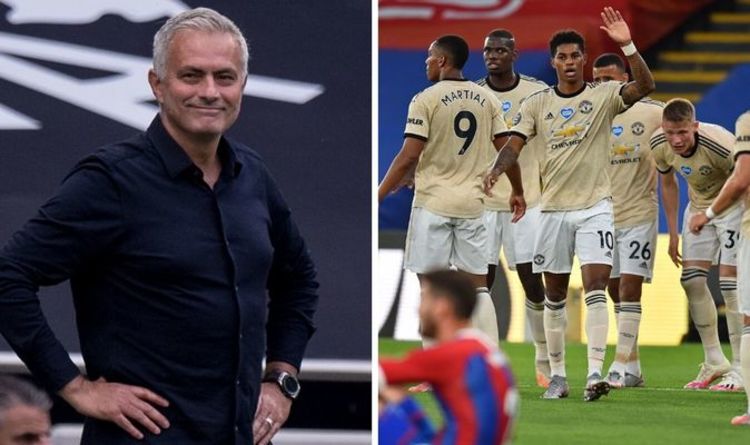 Jose Mourinho says Manchester United have received more luck than other clubs this season to boost their fight to finish in a Champions League qualification place.

United are embroiled in a battle with Chelsea and Leicester to secure a place in Europe’s top competition.

On Thursday night, United earned a 2-0 win over Crystal Palace but it came with slight controversy.

Palace’s Wilfried Zaha was brought down in the box by Victor Lineldof but the referee waved play on and two minutes later Marcus Rashford put United ahead.

Then in the second half, Palace were denied an equaliser when Jordan Ayew was adjudged to be offside by a narrow margin.

Last week, Bruno Fernandes won a penalty against Aston Villa despite replay suggesting he had committed the first foul.

Those decisions have led some critics to say United have been fortunate through their 19 game unbeaten run and Mourinho is among those to subscribe to that view.

“If Manchester United does it, they will do it by playing very well in the second part of the season and when you play well, you deserve,” he said.

“On top of that, everyone knows that they were a bit lucky, more than one time, luck that others didn’t have, we didn’t have it for example that luck.”

While two of Mourinho’s old clubs are battling for a top-four spot, his current Spurs team are in a four-team battle to qualify for next season’s Champions League and he revealed he has an unusual way of motivating his players.

“In quite a funny way, I’m telling the players, two more victories to win the Europa League,” said the Tottenham boss.

“I know it’s not like that, I know the Europa League is a long competition and of course has some good teams.

“Some teams go from Champions League to Europa League in the knockout phase and makes it a really difficult competition. But it’s just a feeling to try to motivate the boys because, of course, our level is Champions League.

“That’s what the fans want, that’s what we as a club want. I’m just trying to motivate the troops because it’s very important to keep that motivation.

“It’s not possible that Sheffield United, Wolverhampton and Arsenal have more motivation than us to get one of these spots.

“Europa League is good, you can rotate players, it’s a fantastic experience for younger people that maybe Champions League comes too early for them.