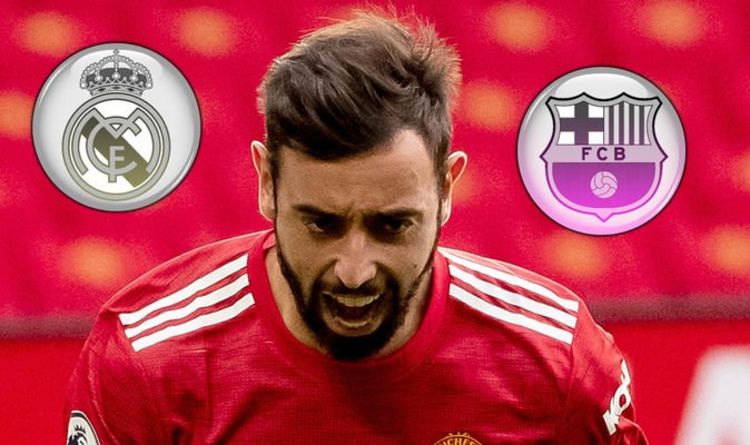 Manchester United took the lead against Tottenham before the international break, with Fernandes opening the scoring from the penalty spot.

But the Red Devils then fall apart, with Jose Mourinho’s team scoring six on a chastening afternoon at Old Trafford.

And The Sun say that, in the aftermath of that crushing defeat, United are facing a fight to keep hold of Fernandes.

It’s claimed both Real Madrid and Barcelona are eyeing the Portugal international, whose mood has plummeted after being aggrieved by Solskjaer’s decision to substitute him.

Real have raided the Red Devils for several players in recent years.

But the deal collapsed when Ed Woodward didn’t file the paperwork in time, much to their rivals’ annoyance.

With Barcelona, United have had less dealings.

Yet they’ll be reluctant to let Fernandes leave the club, both given his importance and the fact he only moved back in January.

Fernandes played down talk of a feud with Solskjaer recently, saying: “There’s been a lot of speculation about that.

“I believe it is a way to destabilise the group. What was said is in no way true.

“I was replaced at half-time, it is true, by technical option. The coach told me that the game was almost over and that we would have a lot of games ahead of us. Got it. I was not satisfied but said nothing that could harm the group.”

“Do not use my name, my colleagues or the coach to make trouble at Manchester United.

“The atmosphere is good and the team is ready to give an answer in the next game.”

Fernandes is expected to feature when United go up against Newcastle on Saturday night (8pm).