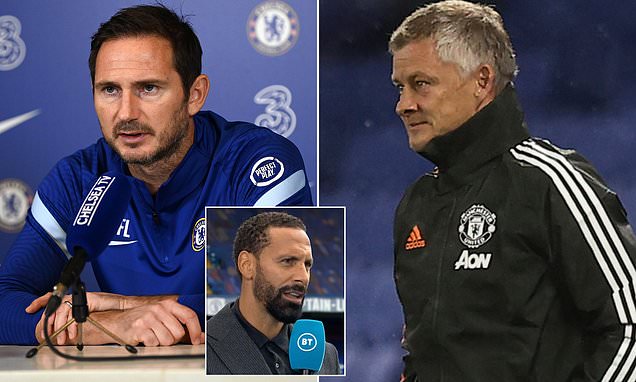 Rio Ferdinand has criticised Manchester United chiefs for the club’s ‘frustrating’ approach to the transfer window, claiming it has caused negativity to build at Old Trafford.

Ole Gunnar Solskjaer has only managed to recruit Donny Van de Beek from Ajax in a £40million deal this summer, with the club being frustrated in their pursuit of Borussia Dortmund star Jadon Sancho.

Chelsea meanwhile have spent £240m this summer on the likes of Timo Werner and Kai Havertz.

And speaking to BT Sport ahead of Chelsea’s match against Crystal Palace, former United defender Ferdinand insisted he would rather been in Blues boss Frank Lampard’s shoes than his Norwegian counterpart’s at United.

‘What position would you rather be in? I’d rather be in Franks. Got business done early, got some time in on training pitch and brought in players he wants.

‘I’d rather be at that end of the spectrum than Man United where you are frustrated and don’t know where you will continue from.

‘The most frustrating thing for United fans is that we have all been aware who their targets were, that’s the frustrating element.’

‘Is Covid playing a part in the financial? At left-back and right wing are where they are looking, the season starts and they haven’t been brought in.

‘All of a sudden losing to Palace at home ignites the negativity. The club appeared on an upward curve, then suddenly no signings and defeat in the first match and it really changes the picture of the club.

‘Champions League would be the target for me personally.’