Whatever the future may hold for Marcus Rashford, he will always have Paris.

How he must love this ground, these opponents. It is his second visit and the second time he has broken Parisian hearts. This being a Champions League group game, with all the attendant safety nets, it was not as devastating for the locals as the last time – when his first penalty for Manchester United removed PSG from the competition. Yet, in many ways, second time around was every bit as special, because it was so wholly deserved.

Manchester United were much the better side in the Parc des Princes on Tuesday night. Hungrier, more ambitious and diligent. Their forwards were more threatening, their defenders more resolute. And in Rashford they have a match-winner of the highest order, demanding the ball with audible urgency because he knew precisely what he was going to do with it. 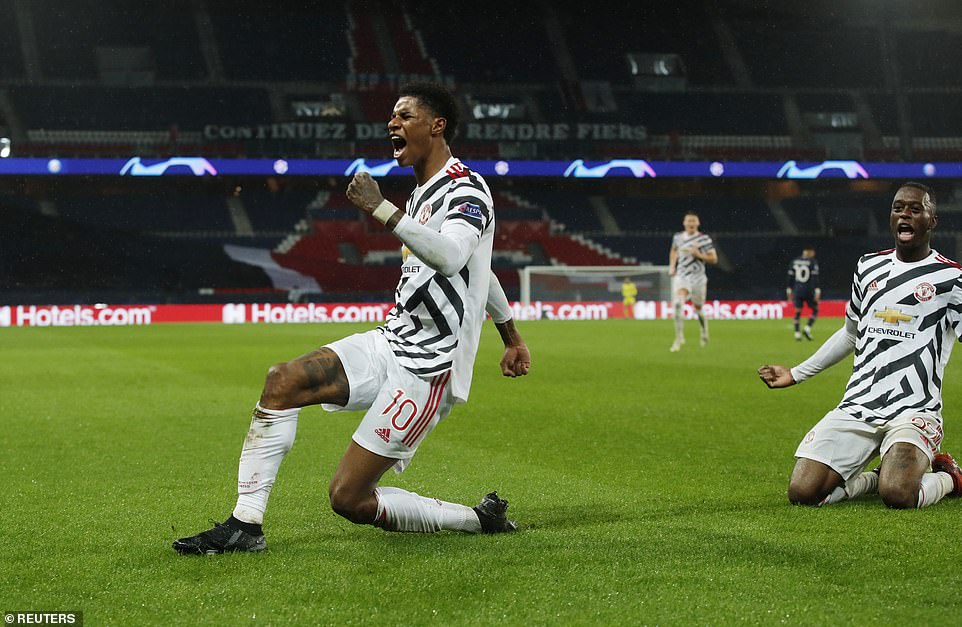 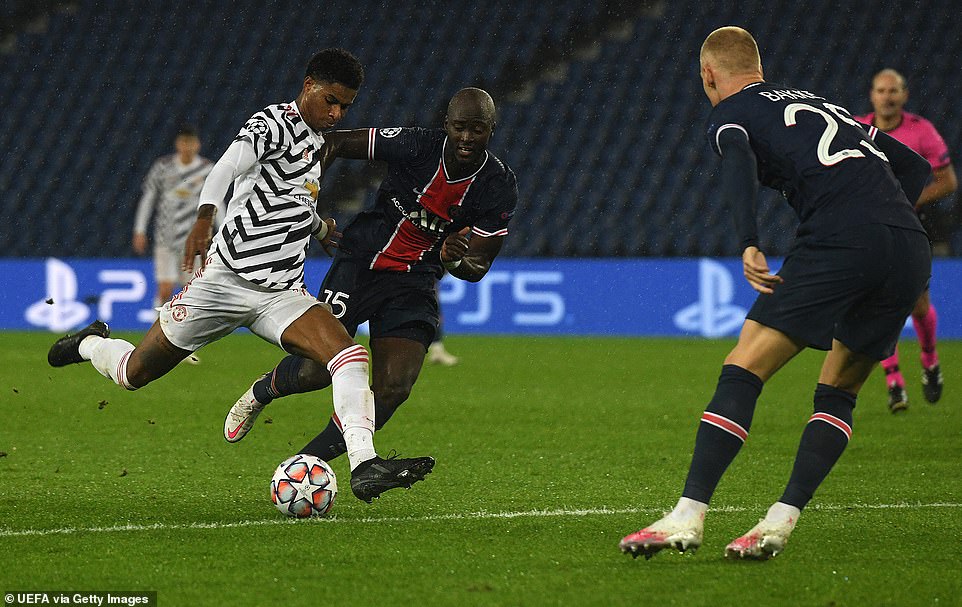 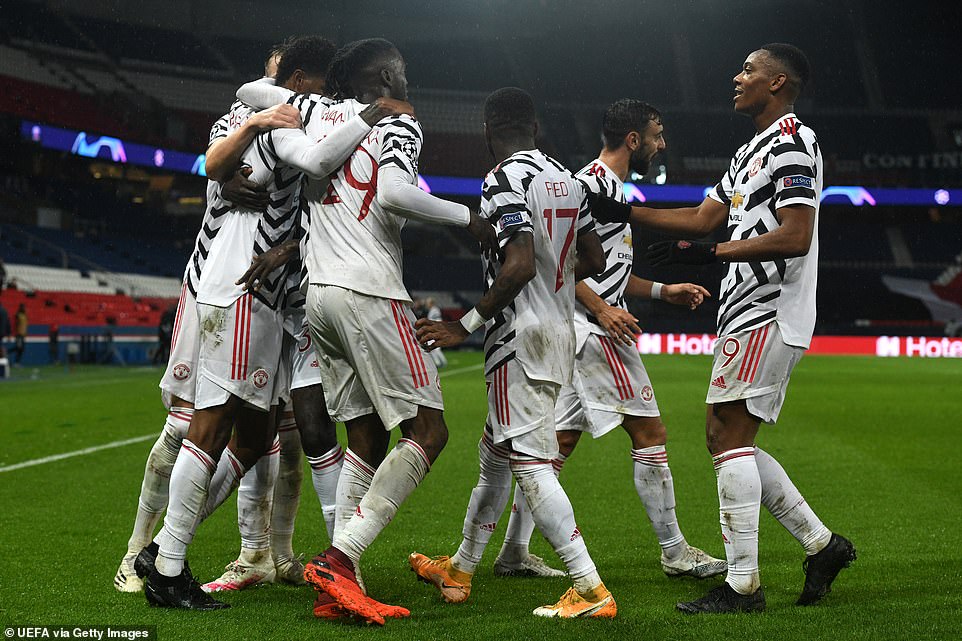 It capped off a marvellous performance from United, who became first side to win a group game at PSG in 24 matches

There were three minutes left when Paul Pogba, on as a second-half substitute, held play up on the edge of the area, shielding the ball and spying Rashford in a dangerous corridor.

The striker made his call and, ball at his feet, simply burst into life, streaking through and finishing with a shot across the body of Keylor Navas.

No Champions League group game has been lost here for 24 matches, yet last season’s finalists looked insipid and slow. Lazy, too. Neymar was actually walking away from the play as Rashford scored United’s winner.

Equal billing as stars of the show, mind – Manchester United’s patched-up defence. Some had feared for them here with key players missing but, not for the first time in a match of significance, Ole Gunnar Solkjaer got his gameplan right.

This was the fixture that probably got Solskjaer the job on a permanent basis two years back, the 3-1 victory here making the clamour for his appointment irresistible. And on nights like this, when he gets his judgement calls so right, it still doesn’t look like Ed Woodward’s worst days’ work.

So three at the back came off, as did Solskjaer’s choice of personnel for the task.

Alex Telles on his debut at wing back was full of confidence, at one stage completing more stepovers in a single move than Cristiano Ronaldo attempted in his first two seasons.

Aaron Wan-Bissaka was equally impressive on the other flank, while Luke Shaw stood tall in a central role.

Special mention, though, to 22-year-old Axel Tuanzebe. One challenge up against Kylian Mbappe, a fine athlete, saw the striker bounce off him, provoking protests from Neymar that put him in referee Antonio Mateu Lahoz’s book. It was the one time PSG’s front pair seemed to be on the same wavelength all game.

Far from stretching the play, Neymar and Mbappe were happy to operate in each other’s pockets, culminating in an incident just before half-time when an Mbappe shot stuck Neymar on the back as he darted in front, and went out for a goal-kick. What was he doing taking that line? It made no sense.

Really, PSG shouldn’t have been in the match at all. They were level through an incredible moment of good fortune. How to put this? Tony Martial scored again last night, but nobody will be singing songs about this one. 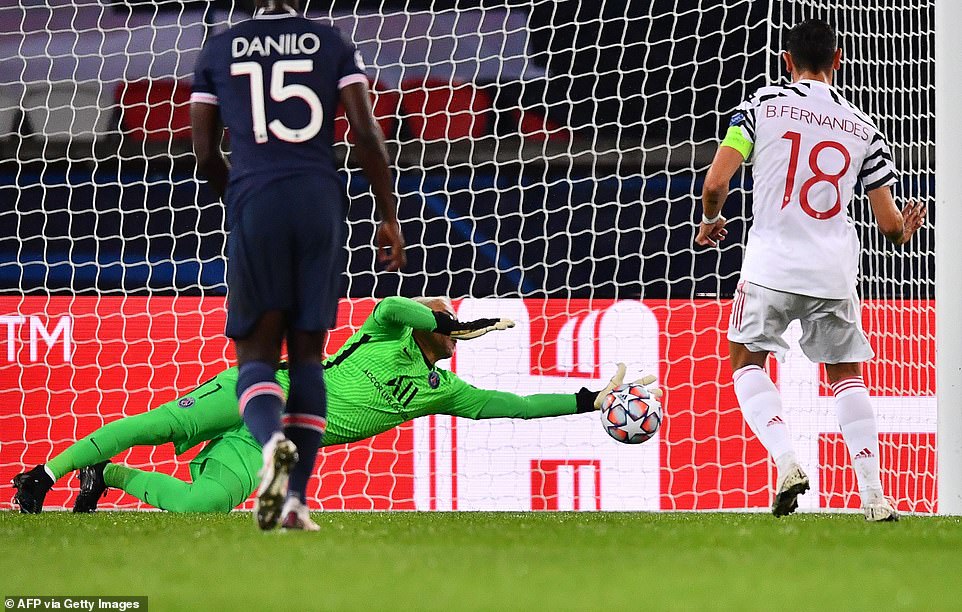 Fernandes showed some nerve to score his penalty, having seen his first saved before it was ordered to be re-taken 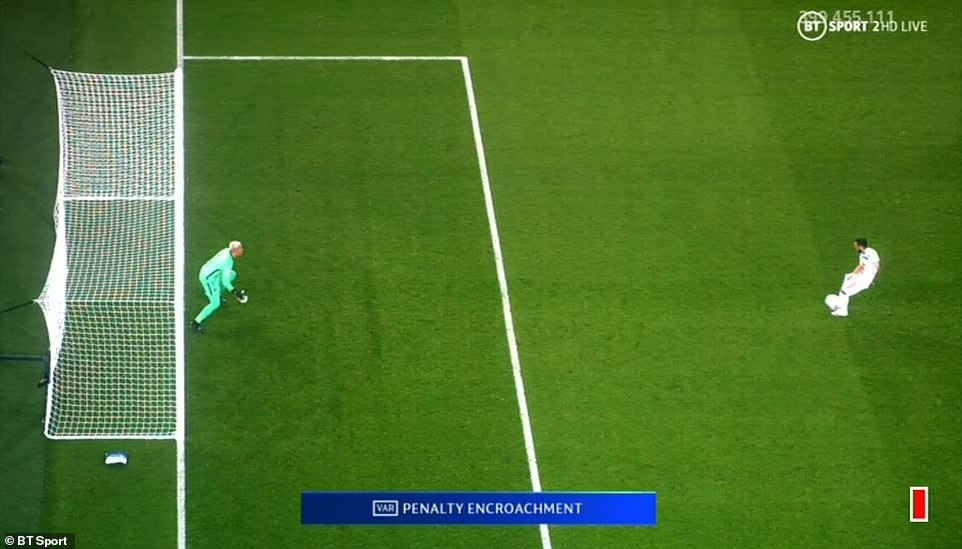 A header from a corner, straight into his own net, was what got PSG back into the game and for a while seemed sure to deny Manchester United a deserved victory. Some actions defy explanation and this was one. Martial was under little pressure. Quite why he chose to steer his header back towards his goal is a mystery. David De Gea had no chance. Indeed, it took a team-mate to beat him. No opponent came close. Everything PSG threw at him, he took.

Until Martial’s intervention, the closest they had come was in the passage of play before the goal. It culminated in a slightly miscued cross from full back Layvin Kurzawa that ended up hitting the bar. The ball eventually went off for a corner and it was that dead ball, struck by Neymar, that Martial sent powerfully past the luckless De Gea.

He had been outstanding all night. PSG, for all the marquee names in their forward line, did not offer much – but when they did De Gea was in top form. Mbappe created very little – although more than the ordinary Neymar – but one shot in the 47th minute, cutting past two defenders, forced the save of the night.

De Gea has his critics but on occasions like this, wet and greasy in Paris with the rain teeming down, he can still look an assuredly safe pair of hands.

When Angel Di Maria cut inside on to his favoured left foot after 12 minutes, De Gea was equal to it, tipping the ball around. Then from the corner, when Mbappe whipped in a cross for Kurzawa in the six-yard box, De Gea reacted well and bravely to repel again. It took another 32 minutes for PSG to test him, roles reversed this time, Kurzawa to Mbappe, but De Gea cleared ably under pressure. 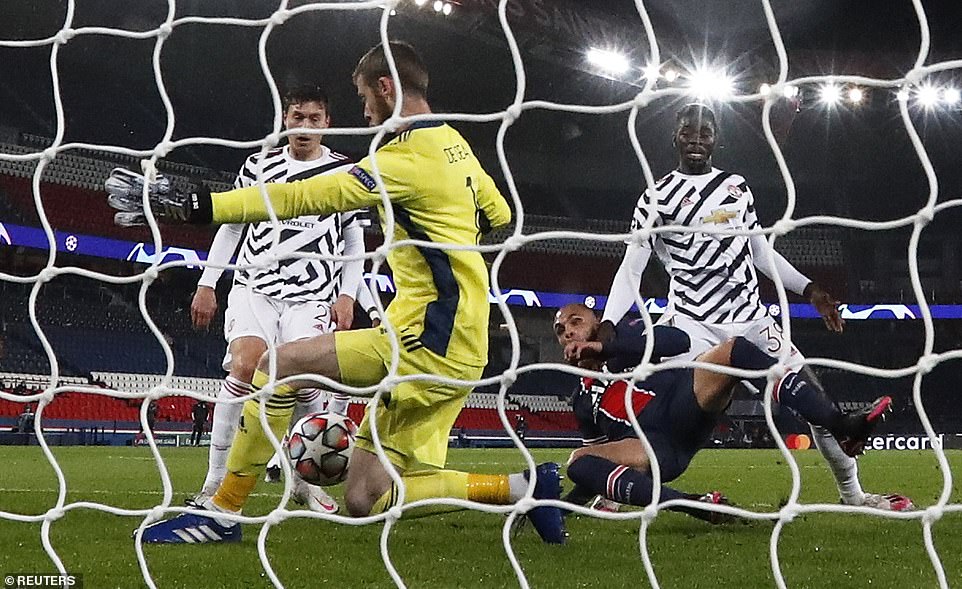 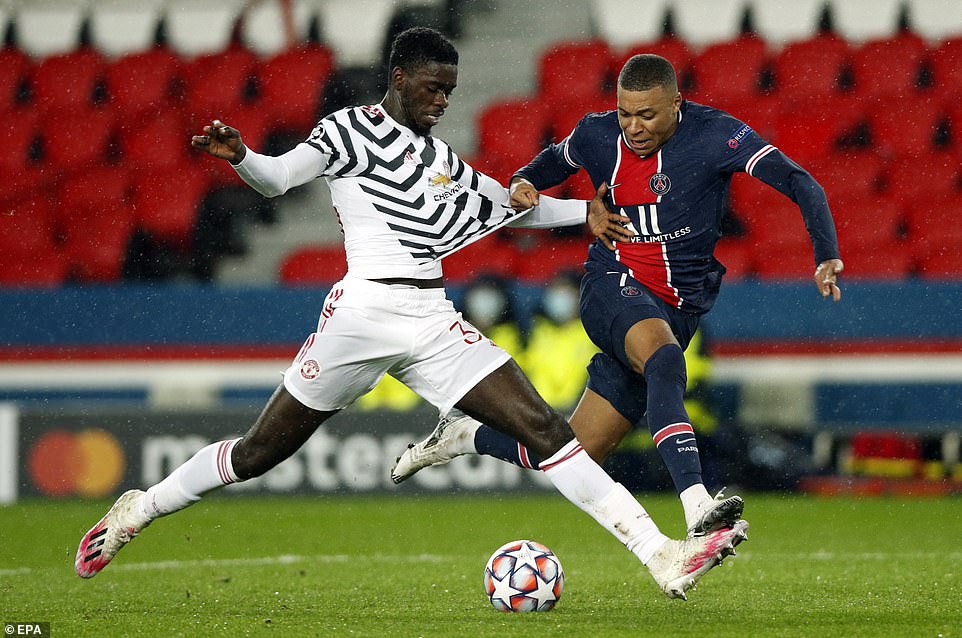 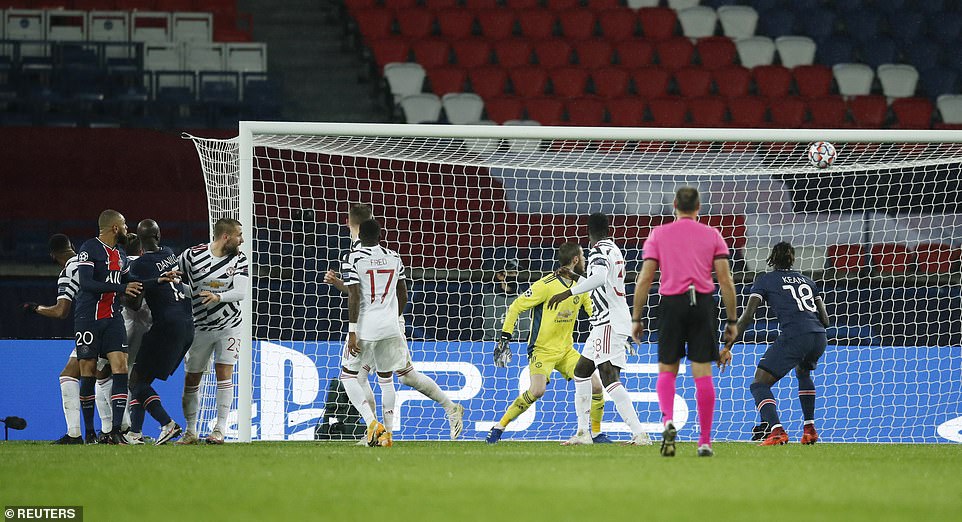 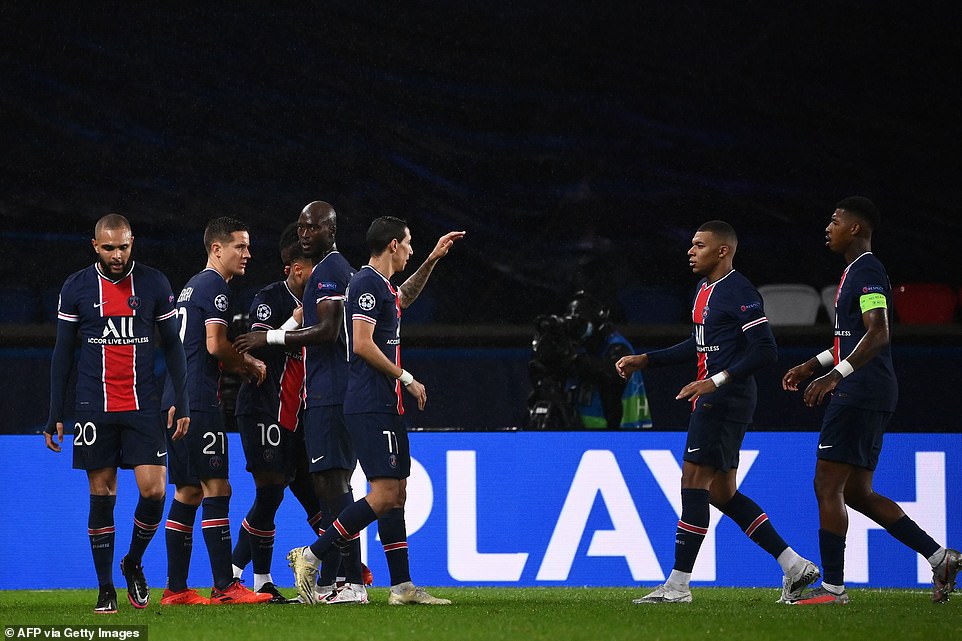 Without a doubt the 6-1 reversal against Tottenham had a profound effect on Solskjaer. Out went Pogba, and any other player unprepared to pull his weight, in came the workers, like Scott McTominay, players that could be relied upon to track their man, to run the hard yards.

Pogba was influential when he came on for Telles after 67 minutes, but it was McTominay’s dogged needling of Neymar that wrested control of the midfield. Last season’s Champions League finalists were simply disinclined to win those battles. They were ponderous and lacking in spark. They looked soft.

From the eighth minute, Manchester United exposed PSG’s defensive uncertainty. A cross by Bruno Fernandes saw Abdou Diallo make a hash of the clearance, almost letting in Rashford. Soon after, Martial demonstrated great control to jink into the box, but his shot was wild and poor.

The next move, however, saw PSG crack. Shaw played a pass into Martial who was felled clumsily by Diallo as he turned. Fernandes missed his last penalty for United at Newcastle, but his record before that will not be forgotten quickly and up he stepped again.

He did his little hop, skip and jump this time, struck it low to the right, but Navas was there to parry. These are changed times, though, meaning a VAR official in a windowless room had a look and declared Navas had moved off his line. He was right, Navas did. And as tough as it is on goalkeepers these days, those are the rules.

So Fernandes retook, and held his nerve. Same approach, same place. Nevas blinked. He went the wrong way. Much the same can be said of PSG since the Champions League final. 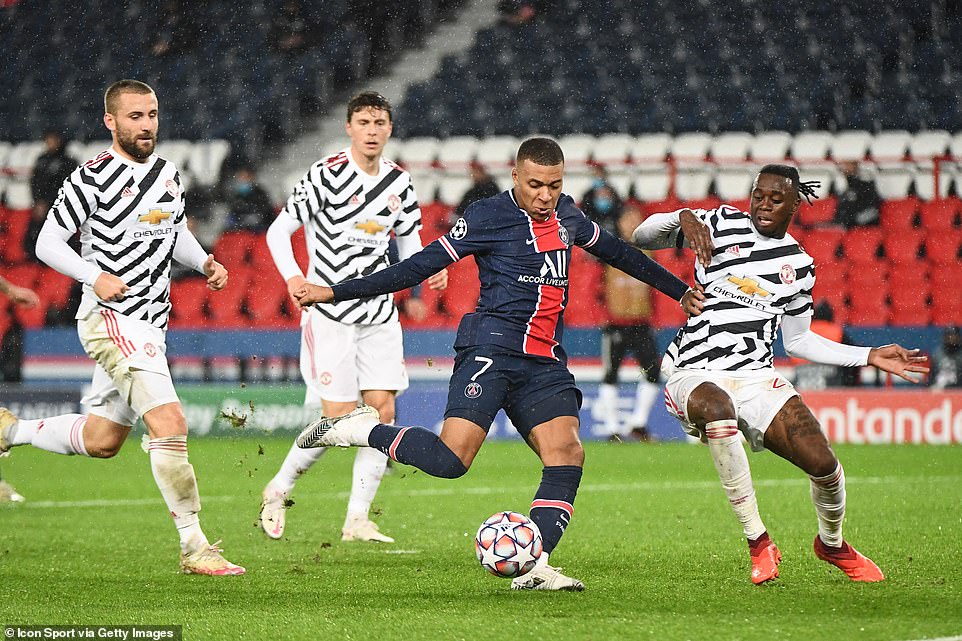 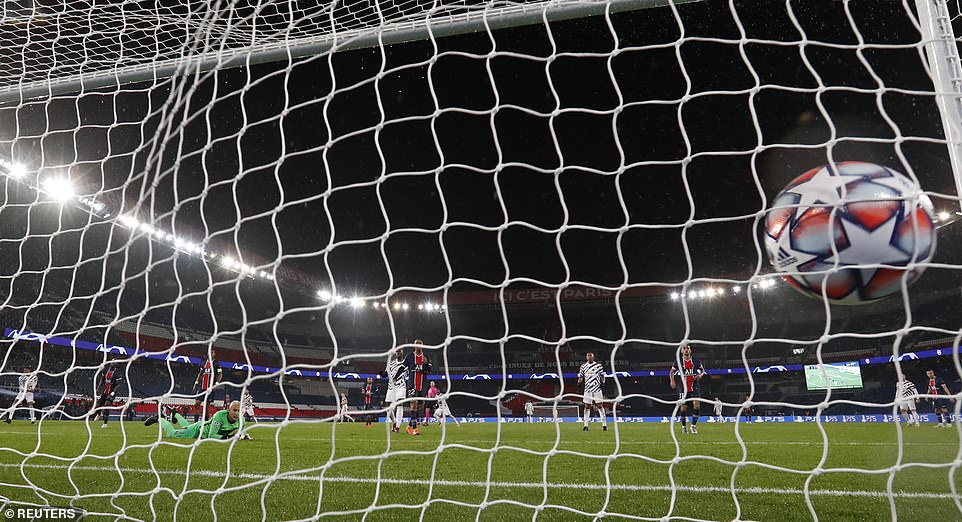 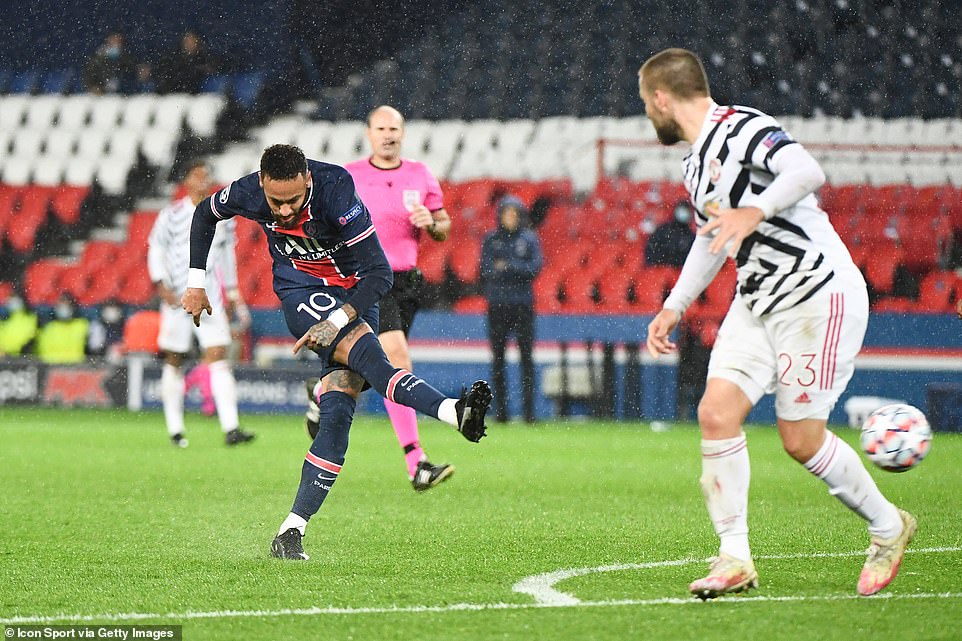