Manchester United couldn’t find a way past old foes Arsenal at the Emirates, as the English giants played out a 0-0 draw on Saturday evening.

Alexandre Lacazette came close to breaking the deadlock during the second half from a free kick, but the Frenchman’s curling effort crashed off the crossbar much to United’s relief.

Edinson Cavani also rued a missed chance with an acrobatic bicycle kick late in the match, but Bernd Leno watched on as the ball whistled past his post.

Sportsmail’s Nick Callow rates all the players from the Premier League stalemate on Saturday. 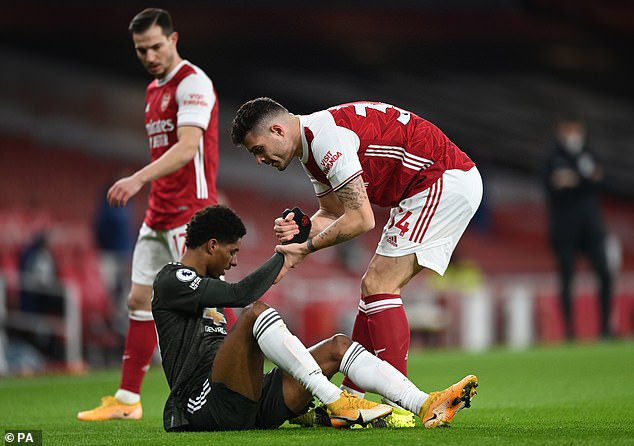 Bernd Leno – Earned his pay with one world class finger tip save from Fred at a time when United were well on top. Stopped Cavani brilliantly too – 8

Hector Bellerin – No longer seems capable of bombing down the right wing and given a hard time trying to close down United’s attacks down his side. 6

David Luiz – An error free display from a player who often seems to have a mistake in him. Did well against fellow South American Cavani – 6 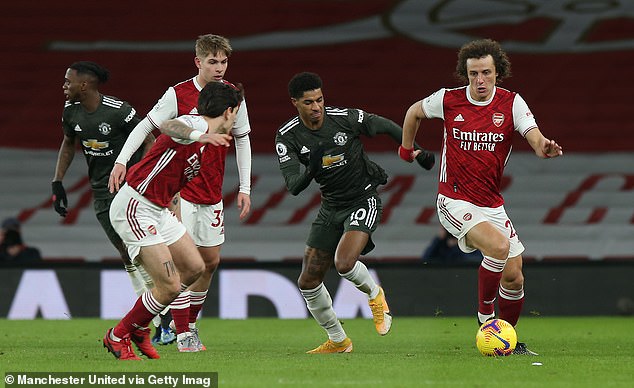 Cedric Soares – Seemed to make a point of picking on fellow Portuguese countryman Fernandes and was duly booked for an elbow to the face. Hard working but no Kieran Tierney – 6

Thomas Partey – Always seemed to be in the right midfield position in defence or attack. Faded in second following recent fitness issues. 6

Granit Xhaka – Has his critics but tireless running and on a run of form. Did excellent defensively against Rashford. 6 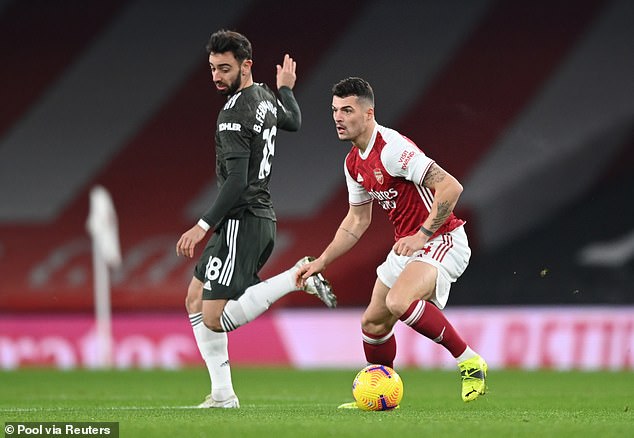 Gabriel Martinelli – Laid on a great chance for Lacazette and then denied Rashford an open goal at the other end in the space of a minute. Crucial to Arsenal but subbed at half-time 7

Nicolas Pepe – Had the measure of United left-back Luke Shaw and his work rate has improved since his return to the side too. Couple of good shots. 7

Alexandre Lacazette – Arsenal’s leading scorer worked so hard but seemed a touch off the pace at times. Better in second half when he hit the bar. 6 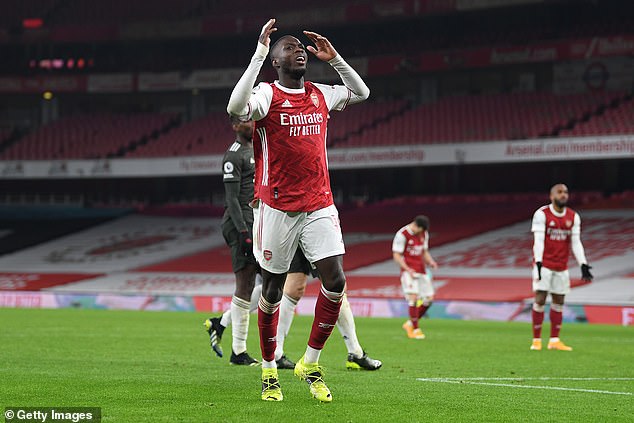 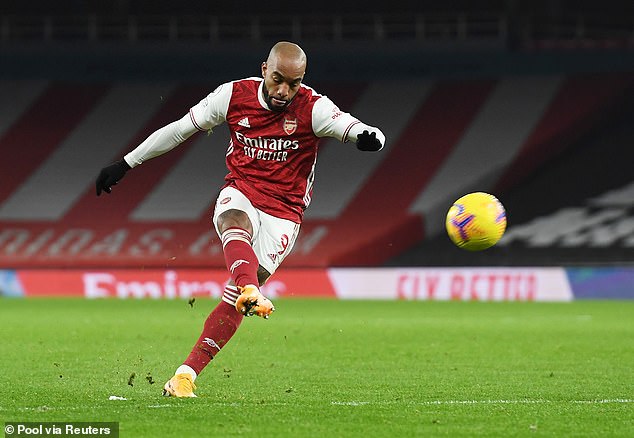 Willian (on for Martinelli 45) made an impact but missed good chance. 6

Odegaard (on for Smith Rowe 83) no time to show himself. 6

Nketiah (on for Lacazette 90) hardly had a kick. 6

Mikel Arteta – Solid tactics to contain and break as he had to cope without being arguably his three best players. 7

De Gea – Important stop from Smith Rowe after a quiet first half. Well organised and alert. 6

Victor Lindelof – Showed why he was recalled with a dominant performance alongside Maguire. 6

Harry Maguire – A rock at the back in a no nonsense captain’s display. Gave away needless free-kicks, though. 6 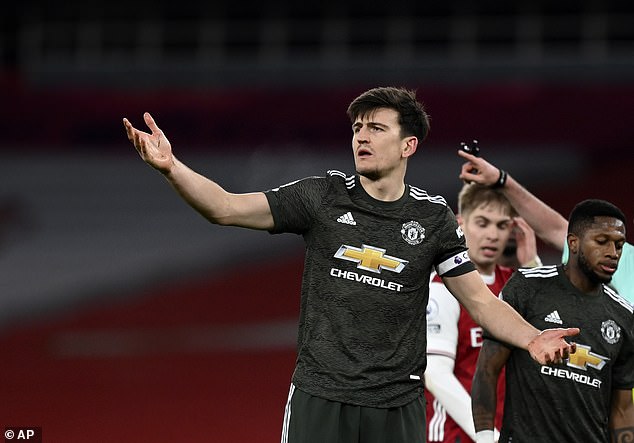 Luke Shaw – Struggled against his nemesis Pepe but good going forward and still a solid display. 6

Scott McTominay – Hard to judge as struggling with what looked like a stomach problem from early on and in the game and came off after 37 minutes. 6

Fred – Solid in the midfield holding role and so unlucky not to get a goal with a deft first half volley. 7 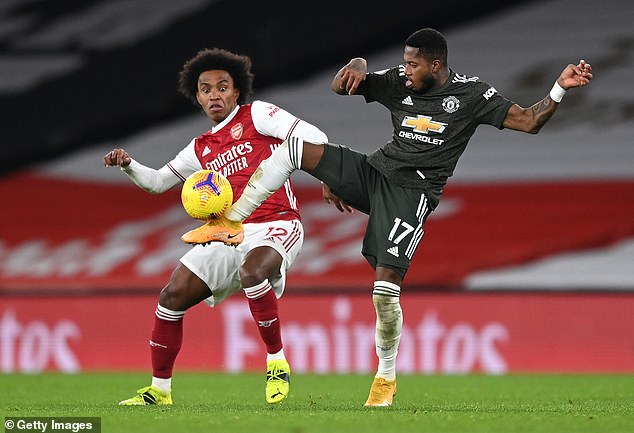 Paul Pogba – Much to like but less influential once asked to play a more defensive role following McTominay’s withdrawal. 6

Bruno Fernandes – Did not shy away from a series of physical challenges and got stuck in with a revenge challenge on Granit Xhaka. 7

Marcus Rashford – Looked dangerous every time he got the ball on the right but should have scored and wasted a good chance to put Fernandes clean through. 6

Edinson Cavani – So hard to pick up as he ghosted across the United front line but largely ineffective despite so nearly breaking the second half deadlock. 5 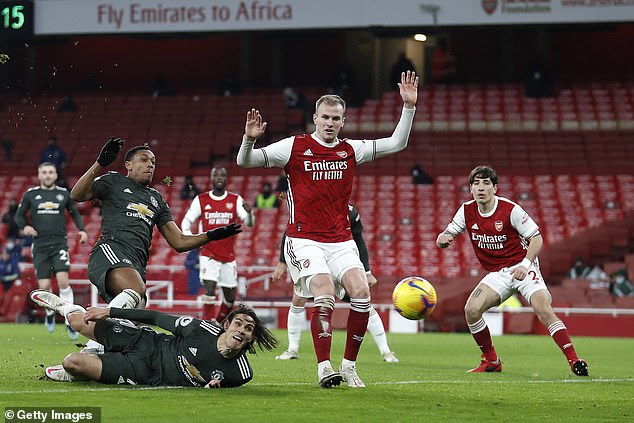 Greenwood (on for Rashford 80) too late to make an impact. 6

Ole Gunnar Solskjaer: Needed to change his tactics to take the match, but a draw here is no bad result. 6