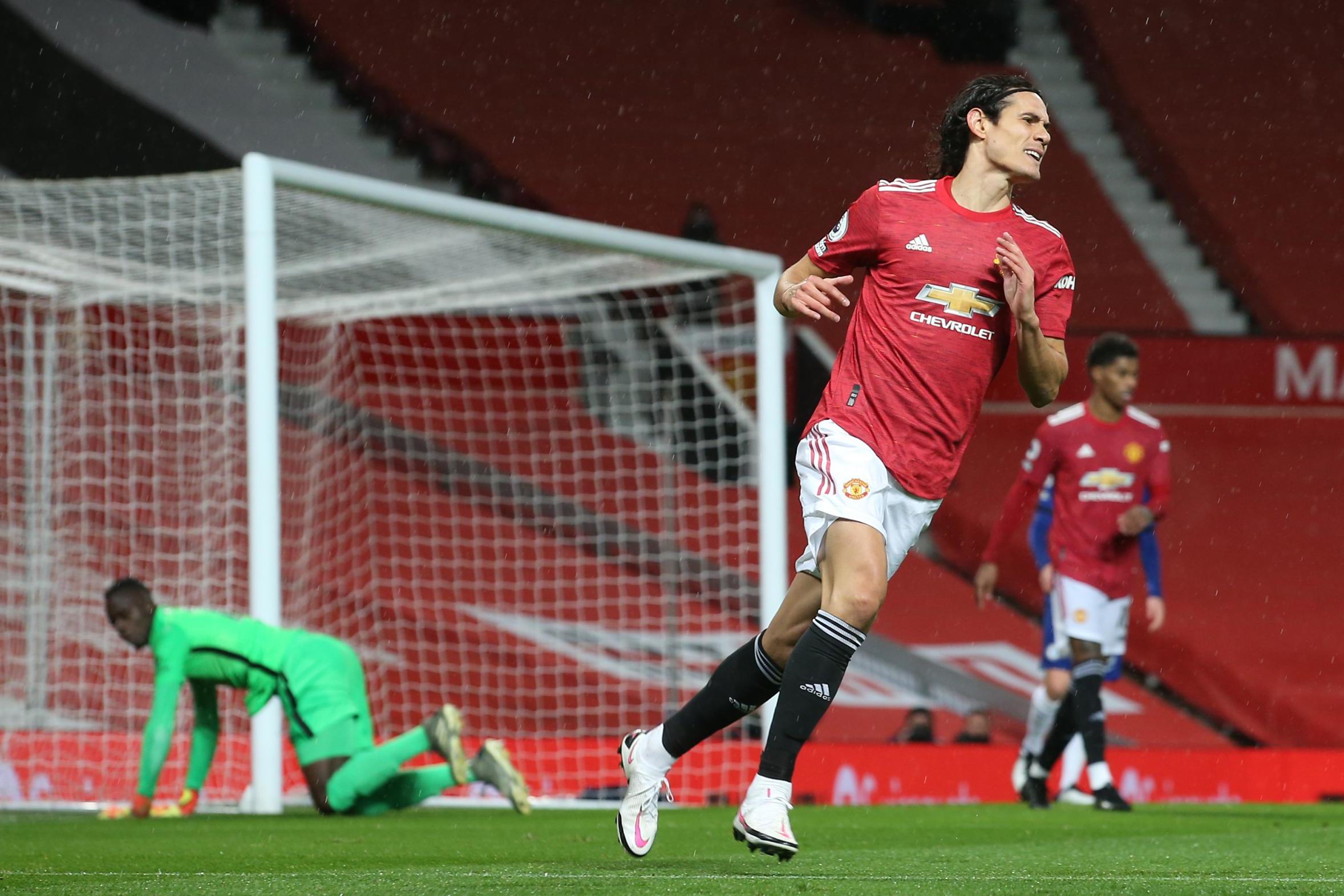 Edinson Cavani nearly scored with his first touch for Manchester United as Ole Gunnar Solskjaer‘s men fought out a goalless draw with Chelsea in the pouring rain.

Having lost this season’s previous Premier League home matches to Crystal Palace and Tottenham in chastening fashion, the Red Devils were looking to make it third time lucky as their top-four rivals arrived at an empty Old Trafford.

But neither side fully mastered the challenging conditions in the north-west, where substitute Cavani went close to making a dream debut impact that would have compounded Chelsea’s exasperation at the lack of video assistant referee intervention.

Blues skipper Cesar Azpilicueta could not believe Harry Maguire got away with wrestling him to the ground in the box towards the end of a first half in which Edouard Mendy impressively denied Marcus Rashford and Juan Mata after nearly passing into his own net.

Lampard sure goals will come

Frank Lampard declared himself pleased with Chelsea’s back-to-back clean sheets and insists his side have not sacrificed their attacking prowess for offensive stability.

“I’m happy with the clean sheet,” he told Sky Sports. “We want more than a point obviously, but to come to Manchester United and not concede that is a great base.

“A game of this level, when you get in the final third you want to make things happen and that didn’t happen for us today so there are things to improve.

“It’s not a beautiful feeling in the dressing room, it’s not, as we want to be better going forward. But I’m less concerned about the attacking side as I know the talent we have here, but the clean sheet is good.”

Solskjaer: We missed the Stretford End

“In the second half, we pushed on and if the Stretford End had been full we might get the goal to get us over the line, as it creates more pressure and urgency.

“We miss the fans, I must say. It is the same for all teams but I think everyone agrees that the edge has gone and I can’t wait to get the fans back.”

Azpilicueta: Referees must use monitor

“On the pitch I felt yes [it was a penalty] because I was in front of him and I felt both of his arms around my neck and my shoulders.

“Sometimes it’s 50-50, like I felt it was, so why not take 20 seconds to review it? It’s a little improvement to the VAR that I think can improve a lot moving forwards.”

Azpilicueta: We could have got more from the game

Chelsea’s captain has been speaking to Sky Sports…

“I had the feeling we could have more, you know? We didn’t create that last pass or pick the right pass or the right decision.

“My feeling is we could have got more from the match.

“It has been a very even game where for moments we had spells, in the first half especially, we controlled it better. In the second half we rushed it and didn’t keep the ball well enough.

“That meant we lost a bit of control.”

James Robson is at Old Trafford

Well that was a tough watch. A draw doesn’t suit either side, but it’s hard to say either deserved more.

Hardly a thriller that, United had the best chances in the end, with Mendy making two excellent saves from Rashford, but Chelsea will look back on that first half penalty not given as the moment they might’ve broken the deadlock.

Stick around for all the reaction from Old Trafford…

That’s the closest we’ve come, Marcus Rashford with a brilliant curling snapshot from the edge of the box that looks destined for the top corner but Mendy gets across to make a superb save.

87 mins: Giving up hope of fashioning anything useful, Bruno Fernandes tries a bicycle kick from the edge of the box. It’s headed away by James.

81 mins: A final change of the day for Chelsea – Hakim Ziyech is on for Christian Pulisic.

76 mins: A bit of frustration seeping out as Rashford goes in on Azpilicueta and he goes into the book, too.

72 mins: Finally, Frank Lampard turns to his bench and he sacrifices his pair of Germans for a couple of Englishmen. Havertz and Werner off, Mason Mount and Tammy Abraham off.

James Robson is at Old Trafford

James and Chilwell have been highlights for Chelsea. They’ve created their best chances from either flank – on both occasions Havertz failed to make the most of the service.

But they’ve also nullified Shaw and Wan-Bissaka as attacking threats.

67 mins: Into the final quarter of what has been a really poor game – I think that Marcus Rashford effort in the first half is the only proper, clear-cut change we’ve seen.

60 mins: The game’s finally starting to come alive. Reece James delivers a wonderful ball from the right and it’s just too high for Havertz, while Maguire gets a crucial touch on it to take it out of the path of Pulisic, who is arriving like a train round the back.

United work the corner short and Fernandes delivers to the front post where Cavani has darted across his man to get the first touch but the angle’s just too tight and it meets the side netting.

55 mins: And right on cue – Edinson Cavani and Paul Pogba are being readied.

Manchester United vs Chelsea is scheduled for a 5:30pm BST kick-off on Saturday, October 24, 2020.