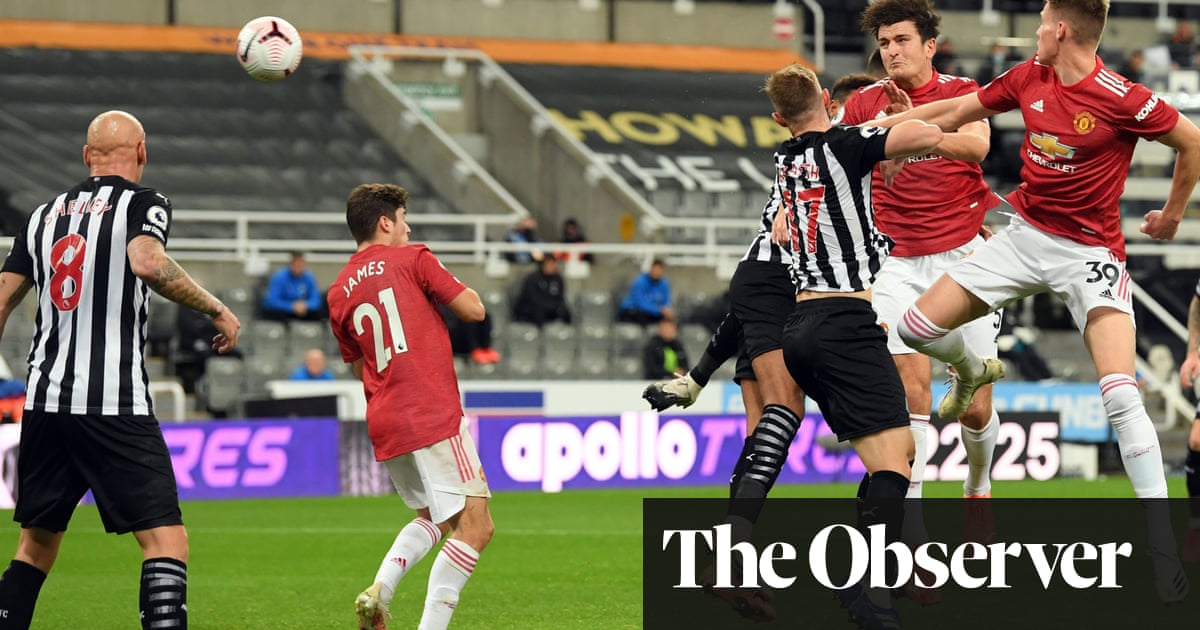 An awful lot of water has flowed beneath the Tyne Bridge since the days when Kevin Keegan’s Entertainers very nearly beat Manchester United to the Premier League title but Newcastle frequently raise their game against these trans-Pennine visitors.

Although it ended in defeat for Steve Bruce’s side this was a prime example. No matter that Ole Gunnar Solskjær’s side temporarily forget their recent stumbles to win courtesy of late goals from Bruno Fernandes, Aaron Wan-Bissaka and Marcus Rashford, Newcastle more than played their part in a wonderful game.

Solskjær spent his pre-match interviews reiterating the message: “We need a response.”

But Manchester United were behind inside two minutes courtesy of a Luke Shaw own goal. It featured the most wicked of deflections – Emil Krafth’s cross ricocheted off the defender’s stretching leg and beyond a wrong-footed David de Gea – but came at the end of a rapid and incisive Newcastle counterattack involving Allan Saint-Maximin and Jonjo Shelvey all too easily outmanoeuvring their supposed markers.

Now Solskjær really needed the right sort of riposte from his team. Presumably to his considerable relief, he got one.

Fernandes thought he had scored after side-footing beyond Karl Darlow in the wake of a one-two with Juan Mata but the goal was disallowed for an offside against the Spaniard. Solskjær frowned but, unbeknownst to the Norwegian, the storm clouds were about to lift.

Mata swiftly took a corner and was soon celebrating after Harry Maguire, arriving late in the box and having expertly dodged Jamaal Lascelles, headed it beyond Darlow from six yards. At the end of an unfortunate week with England, Manchester United’s captain had finally proved he can do something right after all.

With Manchester United looking particularly strong down their left flank, Krafth had begun to struggle at right-back and Lascelles and Federico Fernández were required to make some important blocks and clearances, while Darlow did well to save Marcus Rashford’s apparently goal-bound 20-yard shot.

Not to be outdone, De Gea performed similar wonders to deny Saint-Maximin as an increasingly deep-sitting Newcastle mounted a very rare attack.

Saint Maximin’s extravagantly fancy footwork subsequently succeeded in bamboozling Maguire and friends to the point where the Frenchman eventually crossed in Callum Wilson’s direction. The striker’s connection – via an extended boot – was true but De Gea responded with a world-class reflex save. Maybe Dean Henderson’s presence on the bench is sharpening his concentration?

If nothing could justify the greed fuelled demand that pay per view subscribers contributed an extra £14.95 to watch this game on top of their normal satellite subscription at least Saint-Maximin and De Gea had raised the tone. No wonder Bruce hypes the former as “the new David Ginola”.

The drama continued as VAR signalled a potential penalty and Craig Pawson agreed Jamal Lewis’s boot had made contact with Rashford’s shin. Up stepped Fernandes but Darlow threw out the strongest of hands to divert the ball and Bruce breathed a little easier.

It was the first penalty the Portugal international had seen saved since he first pulled on a Manchester United shirt and emphasised how fragile his side’s improvement was. As good as Mata and Fernandes were, only another stellar stop from De Gea kept Shelvey’s dipping shot out. Suitably stung, Fernandes proceeded to curl in a sublime curling shot following Rashford’s gorgeous reverse pass before Wan-Bissaka and Rashford himself enjoyed the last words.