Solskjaer saw his side emphatically recover from their shock defeat at home to bottom side Sheffield United last week as they took advantage of Alexandre Jankewitz’s second-minute dismissal to thrash their visitors on Tuesday.

Relieved Solskjaer told BT Sport: ‘We have been waiting on them (players) to show the magic and tonight was a night that they could go and enjoy. 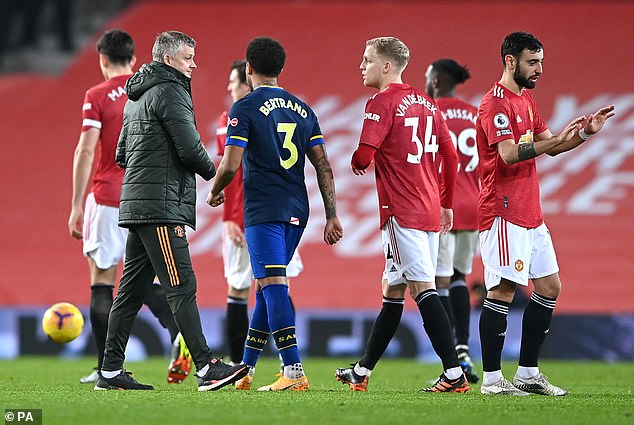 ‘Confidence is one think but it was about the mojo and spark, the X Factor. We haven’t had too many of them where we could sit down and enjoy the football.

‘You have to take your chances in tight or open games. You never know what might be the deciding factor.

Solskjaer singled out striker Mason Greenwood for praise as United won by more than a goal for the first time in nine Premier League games.

He said: ‘Mason Greenwood was terrific and his performance was top for a player who did not score a goal.

‘When a game starts like [this one], it was always going to be about if you can get the first goal.

‘You’ve seen so many examples of 10 men, when they just close up shop and they get a draw.

‘It was about keeping the tempo high and getting the first goal and just getting there.’