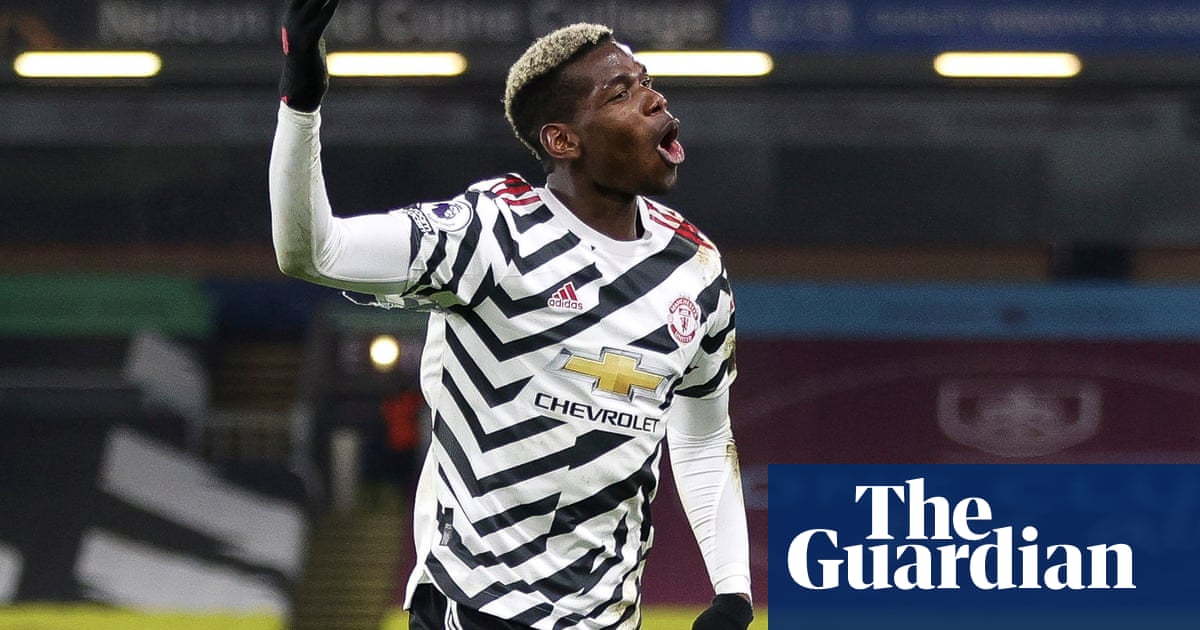 Manchester United are top of the Premier League and for this they can thank Paul Pogba whose influence grew after the break, the midfielder crowning his display with a sweet 71st-minute winner. This came when Bruno Fernandes found Marcus Rashford along the right and he crossed for Pogba to smash in a volley that beat Nick Pope via a Matthew Lowton deflection.

Victory means United go to 36 points and overtake Liverpool, with 33, after 17 games – this having last been achieved after the same number of matches when beating Sunderland 3-1 on 15 December 2012 under Sir Alex Ferguson.

The upturn in United’s fortunes under Ole Gunnar Solskjær is further underlined by the 33-point swing they have engineered over Liverpool as they visit Anfield on Sunday: before last term’s corresponding fixture United were 27 points behind.

United embarked on the tilt at overtaking Liverpool with close to their strongest XI. This had Edinson Cavani restored to centre-forward after a three-game suspension, Eric Bailly passed fit to start a fourth consecutive league outing, and Paul Pogba partnering Nemanja Matic in midfield. Burnley started with Ashley Barnes outmuscling Bailly under a high-ball: a first sight of a recurring ploy of theirs. Having to watch United hog possession would also be a theme for them and so it was Fernandes, Pogba, Luke Shaw and Anthony Martial all did so for United early on.

Solskjær’s men struggled to find a telling rhythm, though. Attacks faltered before being built and so the contest was stuck in the middle third: precisely where Burnley wanted it. Patience, then, was surely key for United: they had the majority of the ball so it was about finding the way to use it.

When Fernandes, Matic and Shaw combined the latter released a cross from the left which Martial dummied and suddenly Fernandes had sight of goal. His shot went straight into the hands of Burnley goalkeeper Nick Pope but this was better from United.

As good was a move on the other side. This time Rashford tapped the ball to Fernandes and he chipped it behind Martial, whose overhead volley was again saved by Pope.

Complacency appeared United’s greatest threat. Fernandes fell prey to this when a heavy touch allowed Lowton to pickpocket him – Burnley swept forward but Chris Wood’s attempt was blocked by Bailly. A little later Martial shot wide when hitting the target was the least required.

A bitty contest had two moments of VAR intrigue. Shaw challenged Johann Berg Gudmundsson and Fernandes took over, hitting a 40-yard pass into Cavani, who was felled by Robbie Brady as he approached the Burnley box. Kevin Friend, the referee, blew for a foul and issued Brady with a yellow card.

VAR inspected both incidents, then instructed Friend to do the same at the pitchside monitor. He did so and decided to chalk off Brady’s booking and instead issue Shaw with a yellow card for his tackle on Gudmundsson, the left-back taking his leg after the ball. United were upset, Burnley tried to race back downfield to take a quick free-kick but were not allowed to and, when finally executing it, failed to capitalise. There was further confusion when a Harry Maguire header that beat Pope was ruled out due to him pushing Erik Pieters when jumping. While this appeared harsh, Martial ended the half by warming Pope’s fingers.

So United began the second half on level terms and thus on course for the point required to take them above Liverpool. Burnley had offered close to zero threat yet could still hope of nicking a goal and an unlikely win.

It would indeed have to be as United continued to dominate, a deflected Fernandes shot that yielded a corner showing as much intent as a buccaneering Pogba surge that scattered claret shirts around him. This created space for Martial to cross from inside Burnley’s area from the left. Here was the contest’s clearest chance – the ball teed up for Cavani at point-blank range but the normally lethal No 7 mis-kicked and Sean Dyche’s side escaped.

The miss illustrated a lack of composure where it counted from United. Fernandes let go a pea-roller from long range. Martial took the ball off Cavani’s toes in the area to inadvertently thwart the Uruguayan. The Frenchman strayed offside when bearing down on Pope. Then Rashford unloaded loosely at near-range.

This was attack-v-defence to an almost comical level. Josh Brownhill and Ashley Westwood each drew yellows for rugby-style pull-downs – a sign of Burnley’s growing fatigue.