After Manchester United stuck nine unanswered goals past Southampton at Old Trafford on Tuesday night, Carlo Ancelotti said he hoped they had used up their full quota before they met his Everton team. His hopes were in vain but it did not mean he and his team were damned. Because if United had not forgotten how to stop scoring goals, they had forgotten how to stop conceding them.

United scored three more to go with the nine they hammered past the Saints but they threw victory away twice, allowing Everton to score two goals in the space of three minutes early in the second half to level the scores once and then conceding a last-gasp equaliser to Dominic Calvert-Lewin deep into added time at the end of the match.

The result meant that United failed to keep the pressure on Manchester City at the top of the table as Pep Guardiola’s side prepare for their showdown with Liverpool on Sunday. This draw was definitely two points lost for United, not a point gained. It means City are two points clear at the top with two games in hand. The momentum, once again, has been sucked from United’s sails. 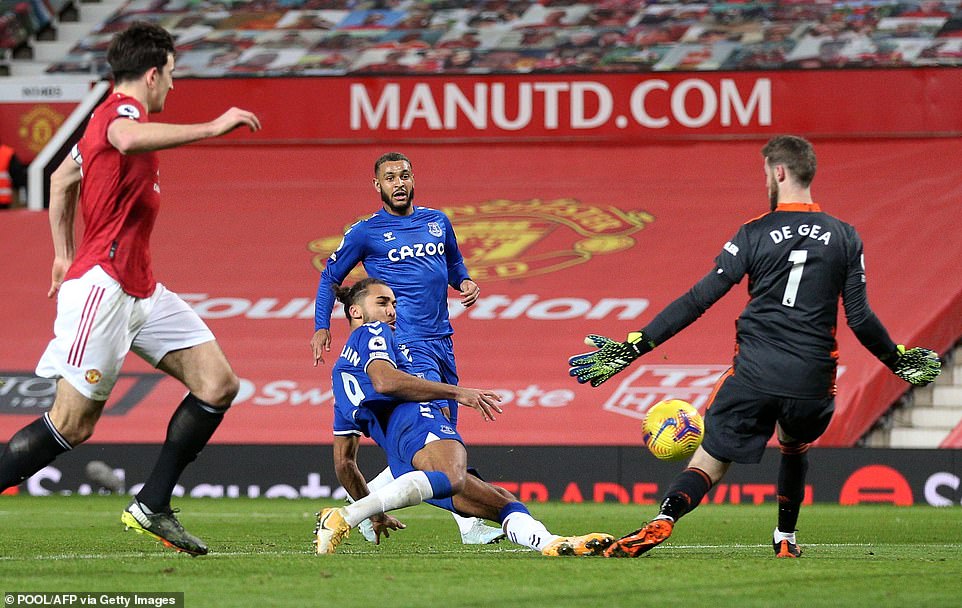 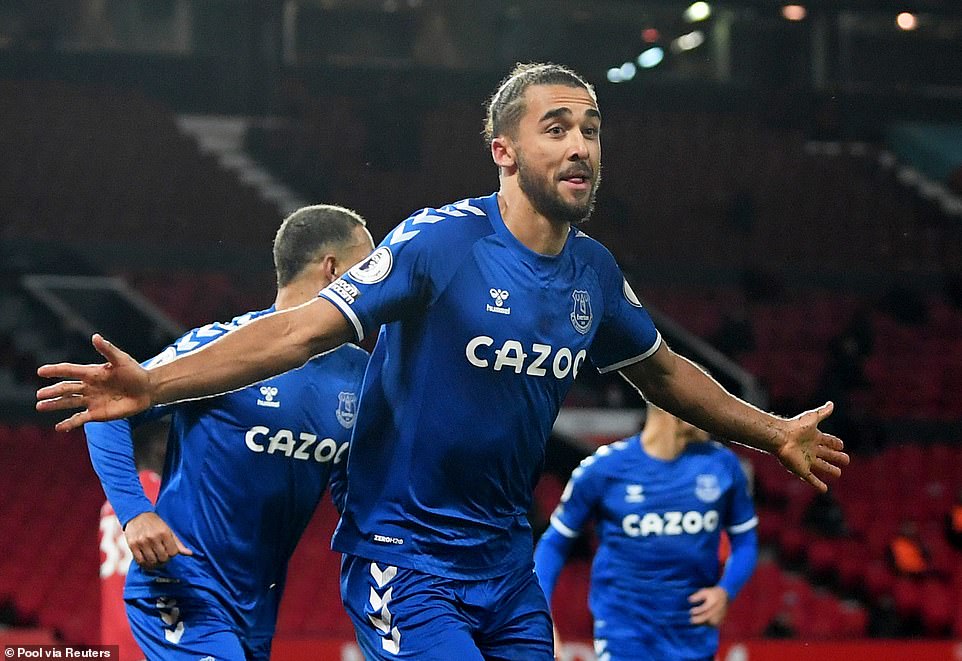 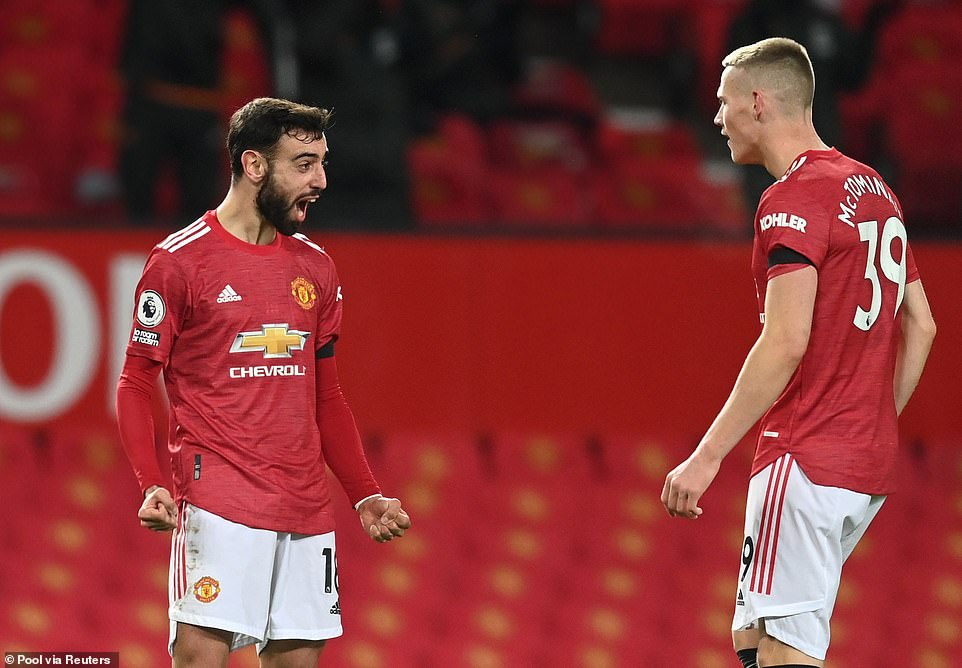 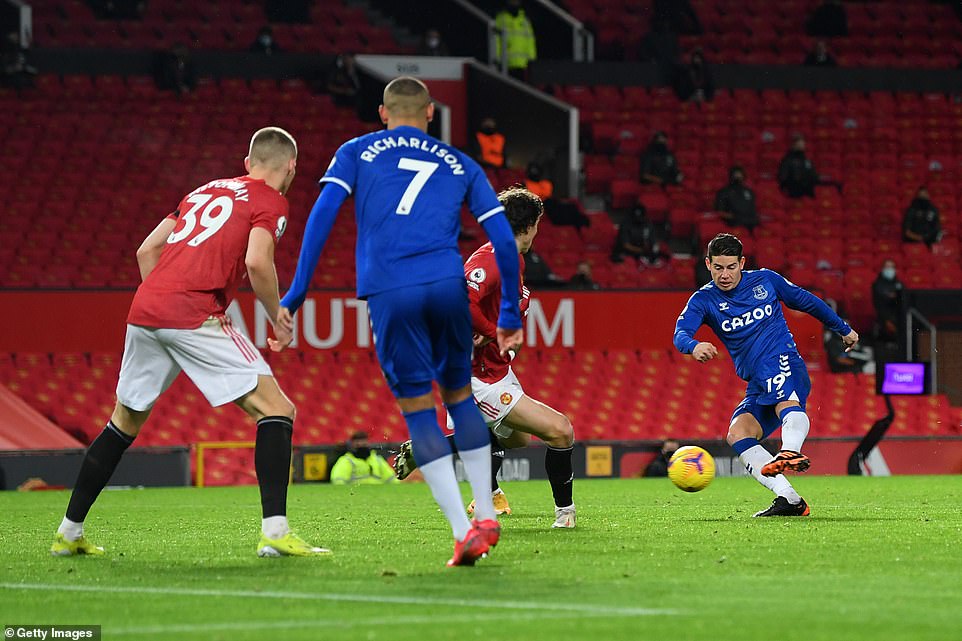 United seemed to have clinched the win with a header from Scott McTominay 20 minutes from time after a day of tributes on the 63rd anniversary of the Munich Air Disaster which claimed the lives of so many of the Busby Babes.

A huge banner was draped over the empty seats in the Stretford End, where McTominay scored, that showed a photograph of Duncan Edwards and his teammates lining up for their final game above the giant caption: We’ll Never Die.

But United failed to clear a free kick deep in the last minute of added time and when it squirted through to Calvert-Lewin, he prodded it past David De Gea. It ruined Ole Gunnar Solskjaer’s attempt to seal his 100th Premier League win as a manager and means that City have strengthened their position as title favourites, at least until they walk out at Anfield. 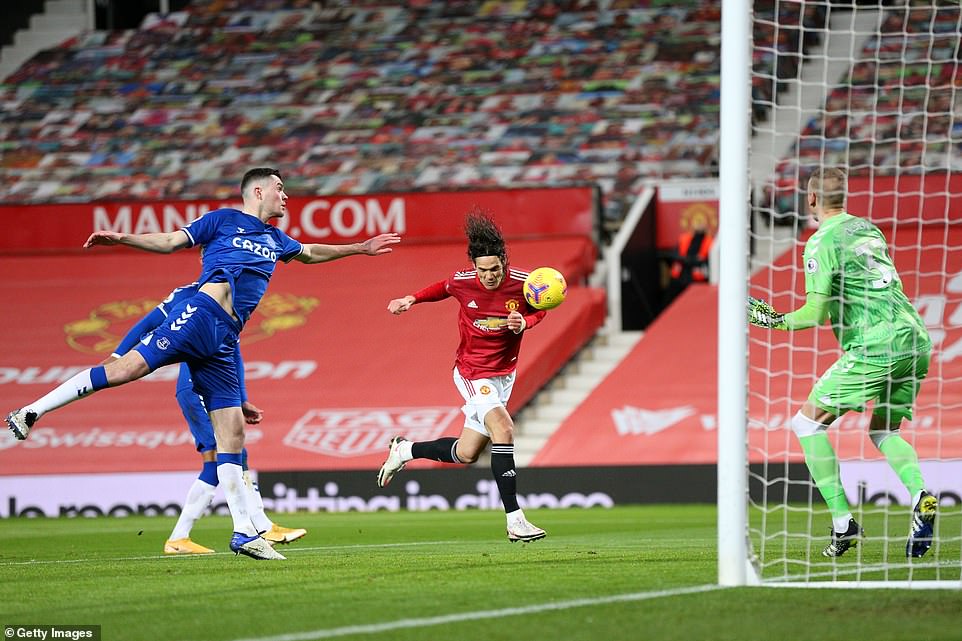 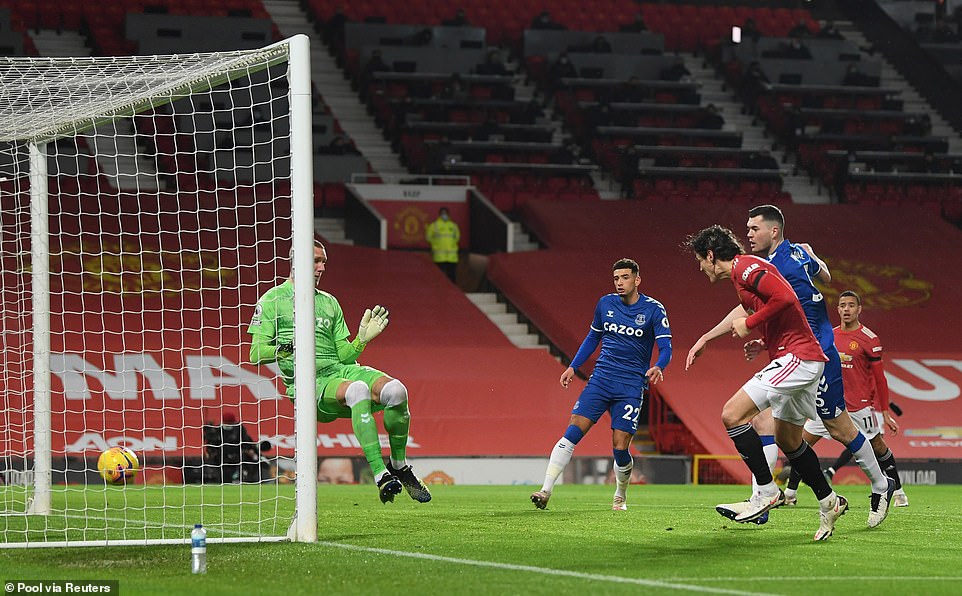 United’s preparations for the match had been disrupted by an alert at the Lowry Hotel, the residence of Jose Mourinho when he was the club’s manager, and their chosen pre-match venue. Soon after they arrived around lunchtime, the fire services were alerted to an issue in the hotel kitchen and arrived in force but the hotel was not evacuated and the problem was diagnosed as a false alarm.

The thrashing of Southampton, a result that equalled the Premier League record, had been quite a way for United to accelerate back into form after hiccups against Sheffield United and Arsenal and Solskjaer only made one change from the side that had routed Ralph Hasenhuttl’s team, replacing Fred with Paul Pogba.

The game had started while replays of Tomas Soucek’s late sending off at Craven Cottage were still playing on screens around Old Trafford. It was an absurd decision by referee Mike Dean but as United and Everton engaged in their early skirmishes, Bruno Fernandes screamed in pain when he was tackled innocuously by Tom Davies.

There was very little contact but, encouraged by the histrionics of the United midfielder, Jon Moss gave a free kick. Fernandes is far from alone in that kind of reaction but maybe there will come a time when we ask players to take some form of responsibility for their actions and the repercussions they cause for their fellow professionals. 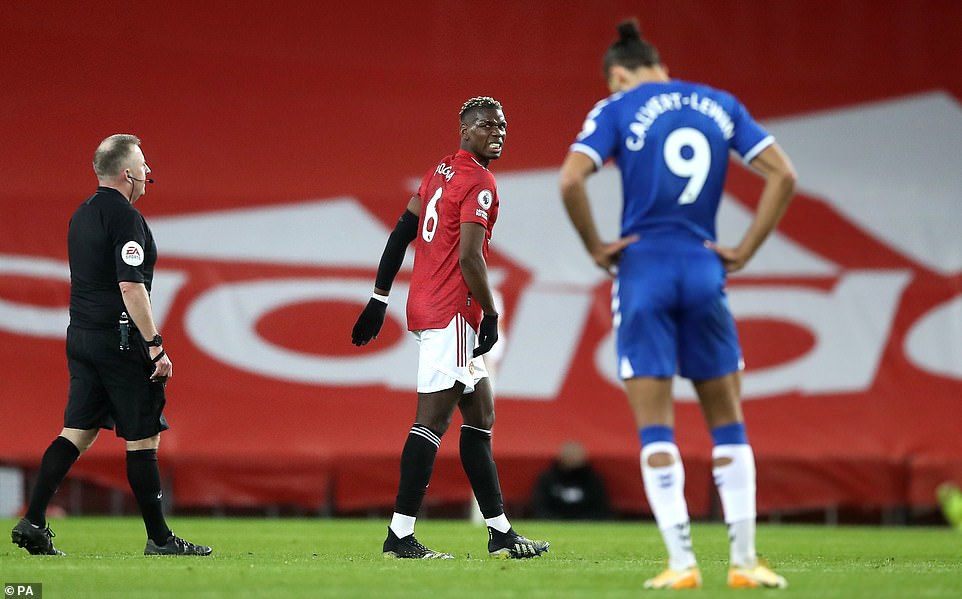 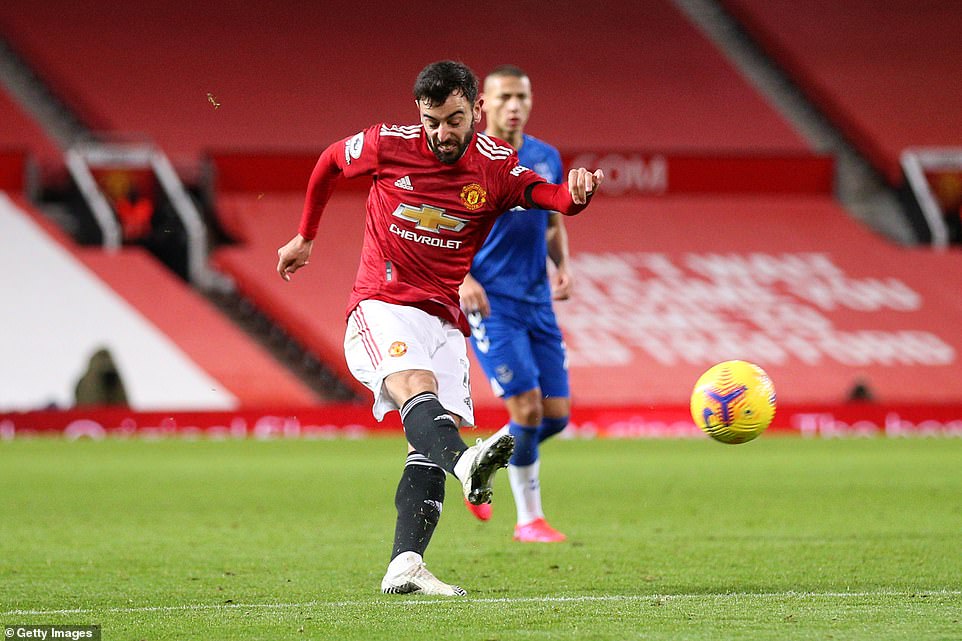 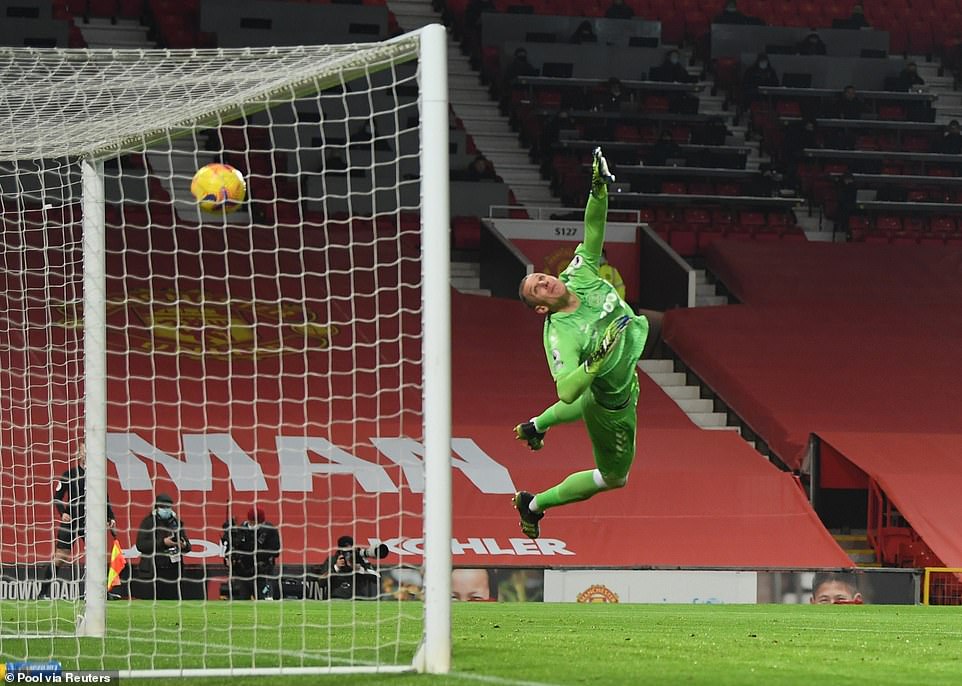 The action finally quickened midway through the half and when a rare Everton attack down the United right was cleared, the home team counter-attacked swiftly.

Mason Greenwood, who had already played the pass of the game minutes earlier, danced past two challenges as if they were not there but as the goal beckoned, he dragged his right-foot shot harmlessly across the area.

A minute later, United were ahead. They worked the ball down the right again and when Fernandes laid the ball back to Rashford near the touchline, Rashford looked up and saw Edinson Cavani at the back post.

Rashford’s cross was perfectly weighted. It sailed over the head of Michael Keane and Cavani had the simplest of tasks to nod it down and past Robin Olsen. 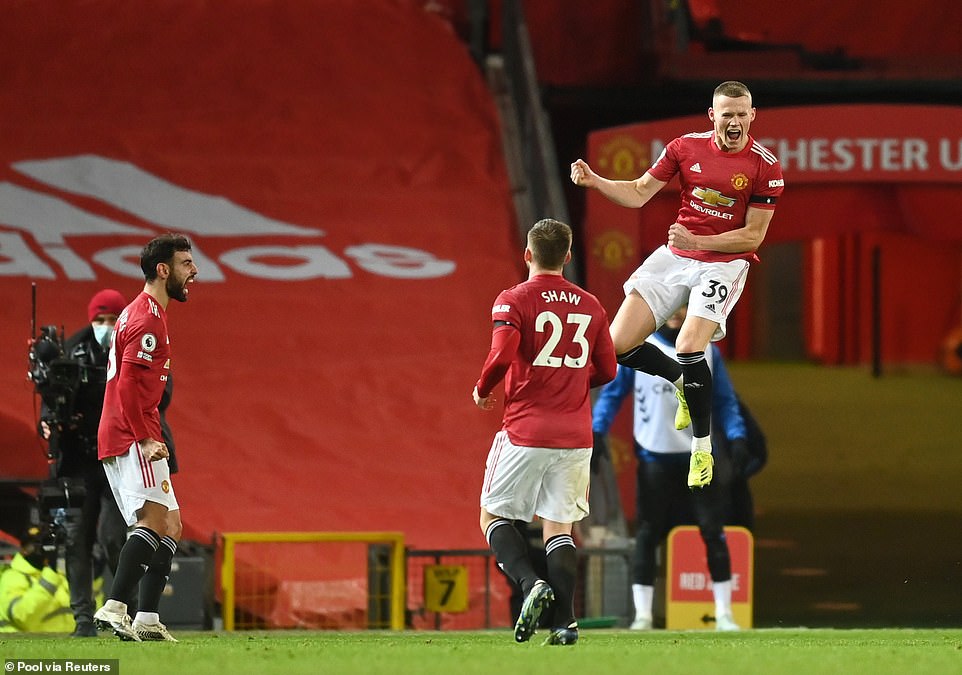 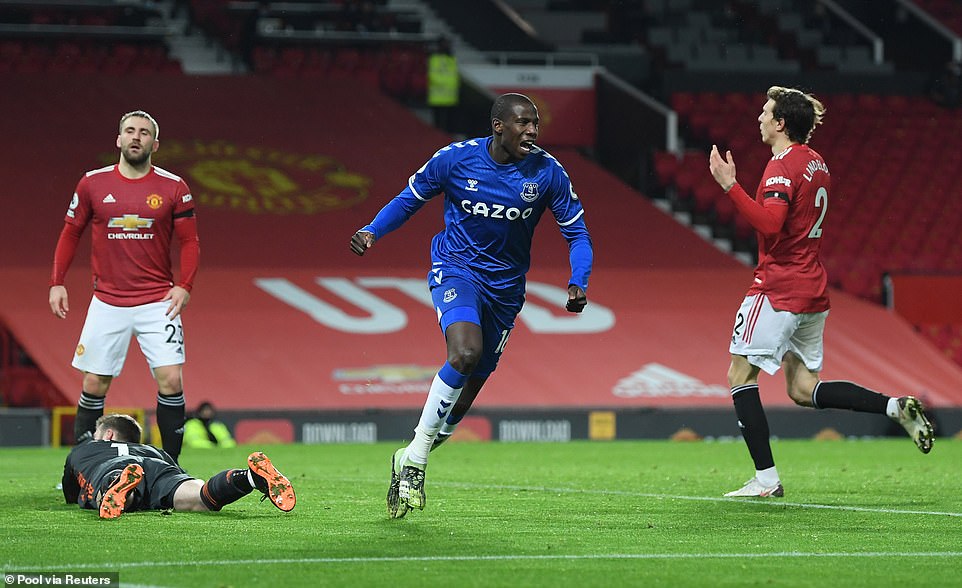 United were dealt a blow six minutes before half time when Pogba pulled up in the middle of the pitch, clutching his right thigh. He limped away down the tunnel and was replaced by Fred. It was a cruel twist for Solskjaer at a time when he has begun to elicit something approaching consistent performances from the France World Cup winner.

United nearly contrived to hand Everton an equaliser when David de Gea came out of his goal in anticipation of a backpass from Victor Lindelof. But Lindelof hesitated and his attempted clearance rebounded into the path of Richarlison. De Gea was stranded but Richarlison’s attempt to curl his shot into the net lacked conviction and bounced tamely wide.

On the stroke of half-time, United went further ahead with a goal that took the breath away with its combination of insouciance and sheer brilliance. The ball was played to Fernandes 35 yards out but he let it run on to Aaron Wan-Bissaka with a nonchalant flick of his right foot. Wan-Bissaka played it back to Fernandes and he took a touch before a curling a vicious dipping shot round Davies, over Olsen and into the net.

There was still time for Everton to grab a lifeline before the interval but they could not quite grasp it. Dominic Calvert-Lewin ran on to a through ball and advanced on De Gea but even though he hit his left-foot shot cleanly and past the left boot of the United goalkeeper, it rolled just wide of the far post and the opportunity was gone. 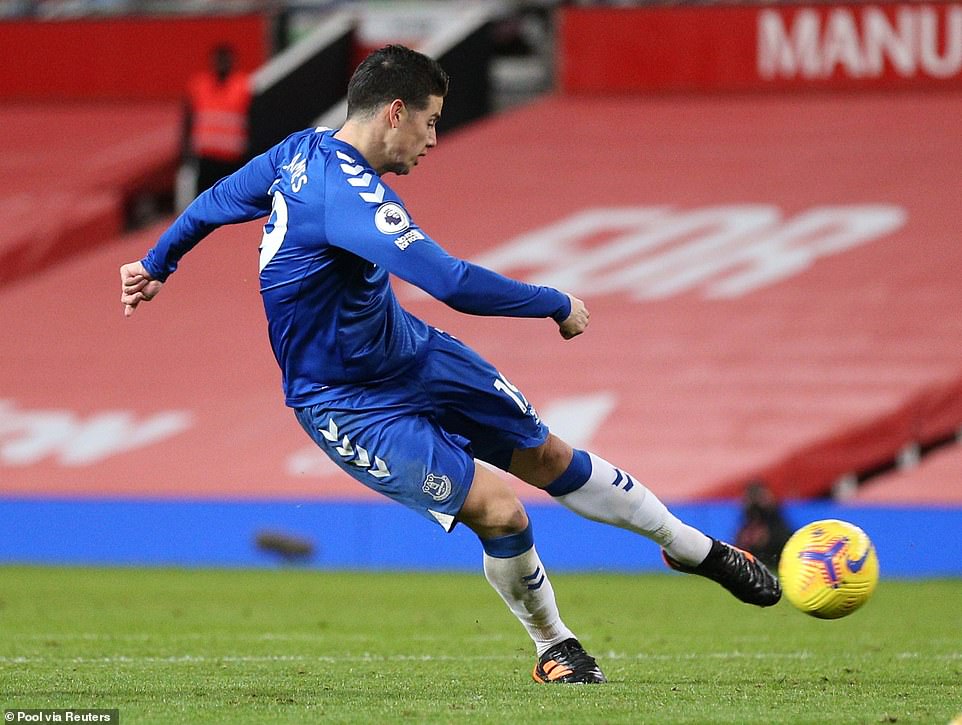 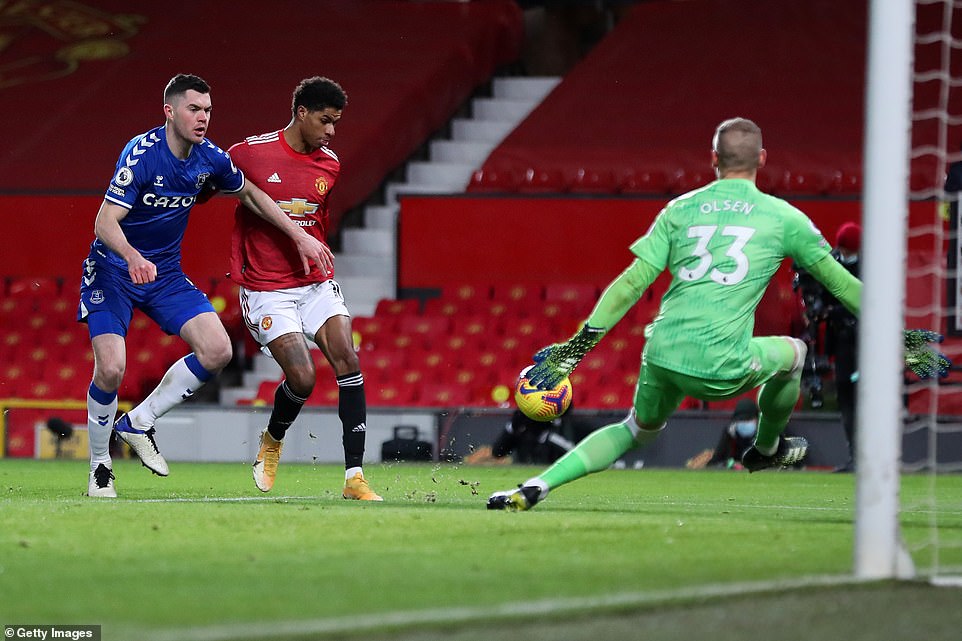 United started the second half strongly and Luke Shaw forced a diving save from Olsen after he played a slick one-two with Cavani but four minutes after the break, Everton were back in the game. Davies broke strongly from midfield and played a ball inside Harry Maguire for Calvert-Lewin to run on to. Calvert-Lewin was forced wide and could only poke a cross-shot at De Gea but De Gea only succeeded in pushing it into the path of Abdoulaye Doucoure, who prodded it over the line.

United were stunned. So stunned that they conceded another goal almost immediately. Their defending was partly to blame again. They failed to clear a cross from the left and then allowed the ball to be played to James Rodriguez 12 yards out. James has one of the sweetest left feet in the game and he used it to good effect. He brought the ball down and, flawless technique, hammered it low past De Gea into the corner of the net.

Rashford should have restored United’s lead after an hour but his attempted dink over the goalkeeper was blocked. It took ten more minutes, and the substitution of James, for them to seize the advantage again and this time it was the Everton defence at fault.

Shaw curled a free kick from the left touchline into the heart of the box with intent and pace but the Everton defenders allowed Scott McTominay to rise above them and flick it goalwards. It was not a powerful header and Olsen should have saved it but the goalkeeper seemed to mistime his dive and allowed the ball to evade his grasp. He and his team were saved by Calvert-Lewin’s last-gasp equaliser. 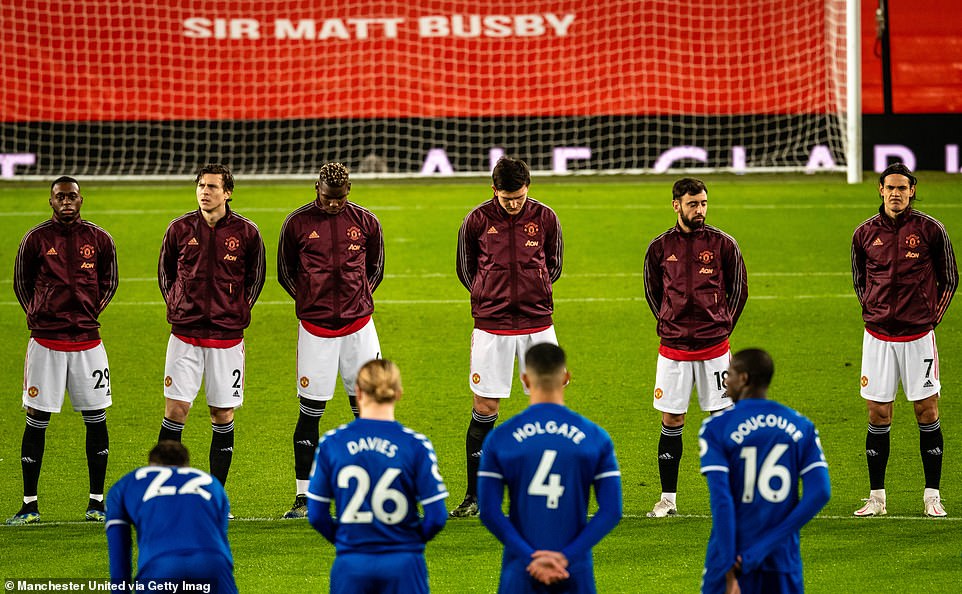 The sides held a minute’s silence, and wore black armbands, to pay tribute on the 63rd anniversary of the Munich Air Disaster