This was one of the biggest goals of the Premier League season, for sure. A flash of Marcus Rashford’s left boot, a big deflection off Wolves defender Romain Saiss and Manchester United were in to second place in the table.

Only two minutes of added time were left when it came and it was hugely unlucky for Wolves. Saiss, their impressive Moroccan defender, had been the best player on the field up until that point.

But none of that really matters now. United are a big player in this season’s title race now and it is a long time since we have said that. 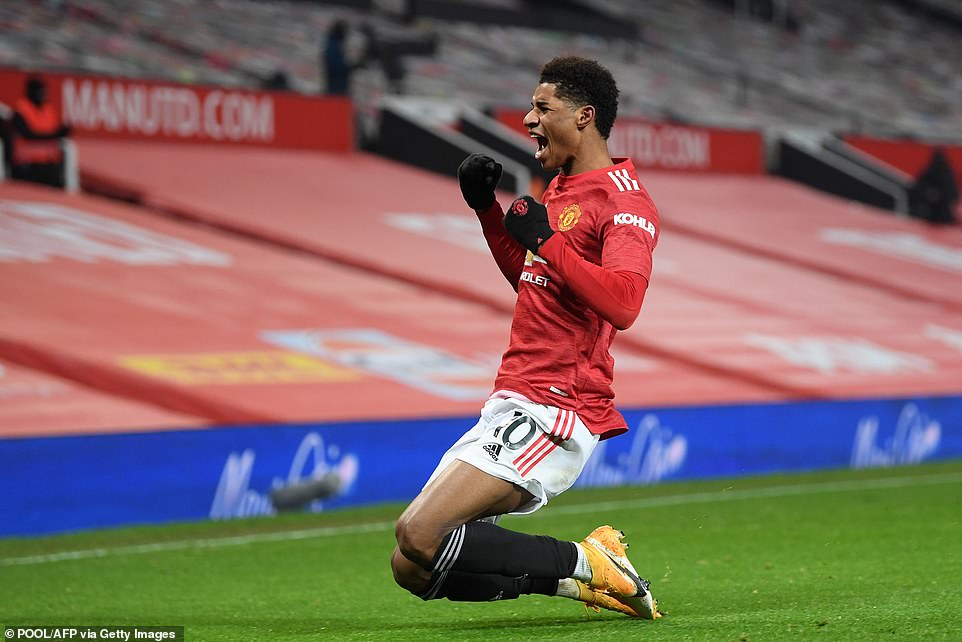 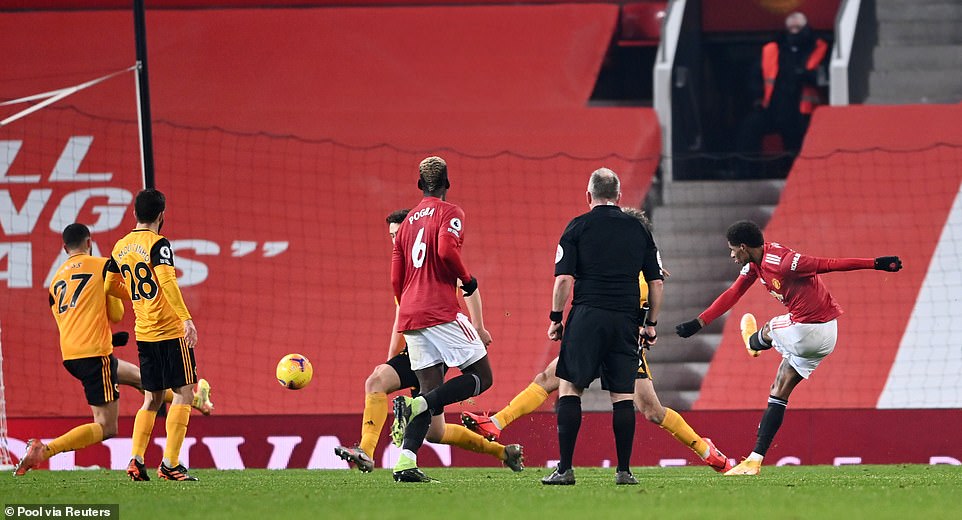 Wolverhampton Wanderers had defended well throughout the night, and were unlucky to lose the match late on 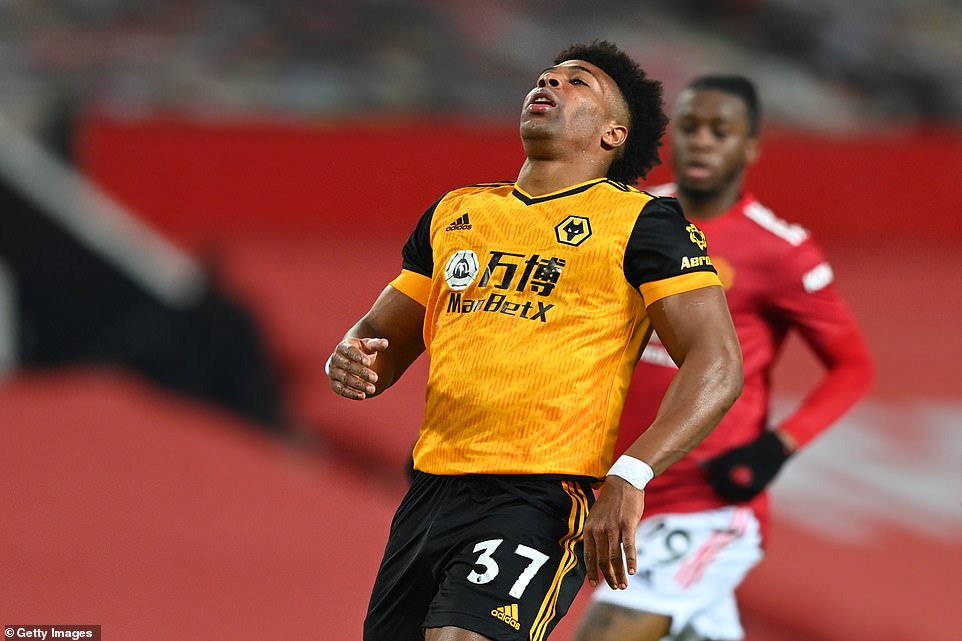 Wolverhampton Wanderers were lacking a number of players through injury or rotation, and couldn’t find their goal

Liverpool play at Newcastle on Wednesday and can take their lead at the top out to five points. But they will have played a game more. United play again here at home to Aston Villa on Friday and therefore have the opportunity to keep right in touch. All of a sudden, it feels like a contest at the top between two teams who are due to play each other in the middle of January.

This is the kind of difference that big goals can make. A draw in this game and United would have remained in the pack. A point behind Leicester and Everton and just two ahead of Villa and Chelsea, they would have been just another hopeful but inconsistent team chasing a Liverpool side who everybody probably feels have the capacity to eventually streak away.

But this win gives United the look of a real challenger. Liverpool conceded a late goal to draw against West Brom on Sunday and United scored one to win here. That is a swing of four points, right there. Over the course and distance, these things matter.

United did not play particularly well here over 95 minutes. They deserved no more than a point on the balance of play and chances. But they lasted the game better and that really helped them at the death. They seemed to have more energy in the last 15 minutes and in the end it paid off.

Saiss – scorer of an equaliser against Tottenham at Molineux on Sunday – had actually stopped Rashford in his tracks not long before the goal.

The United striker had run clear but Saiss went to ground to block. It was good defensive work and Rashford turned away from that one with the look of a player who perhaps felt his best chance of the night had just come and gone.

Indeed, when Rashford scampered away in the 93rd minute after a Bruno Fernandes ball, there seemed less danger than previously. The pass from Fernandes was a lovely one. Struck with his right foot from his own half, it had a perfect trajectory and pace. 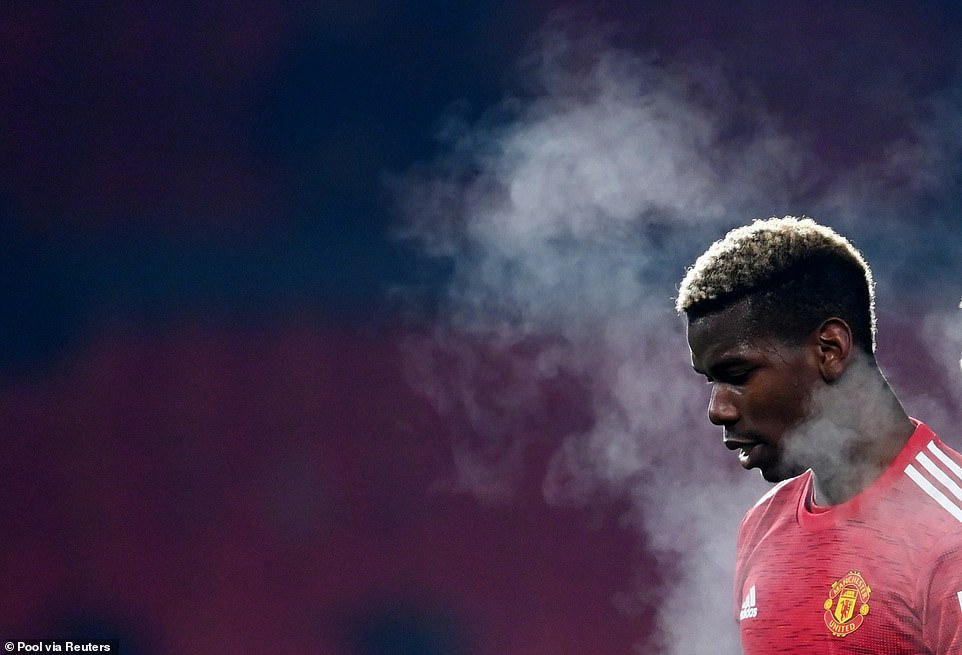 Manchester United were often slow in the build up, but did better when Paul Pogba made his way forward more often 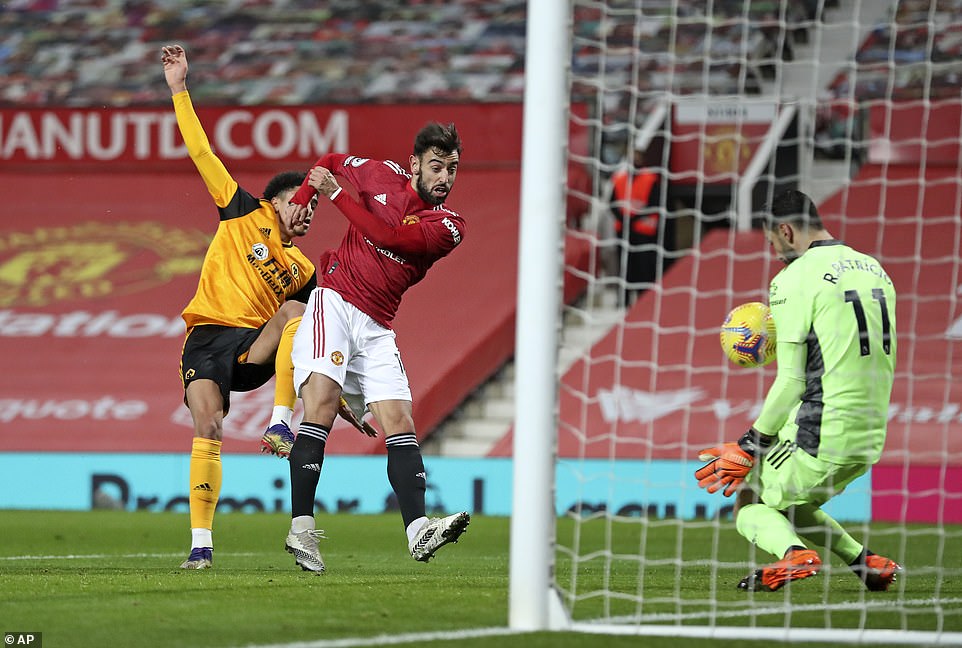 Bruno Fernandes had the best chance of the first half when he snuck behind at the back post, but his shot wasn’t good enough 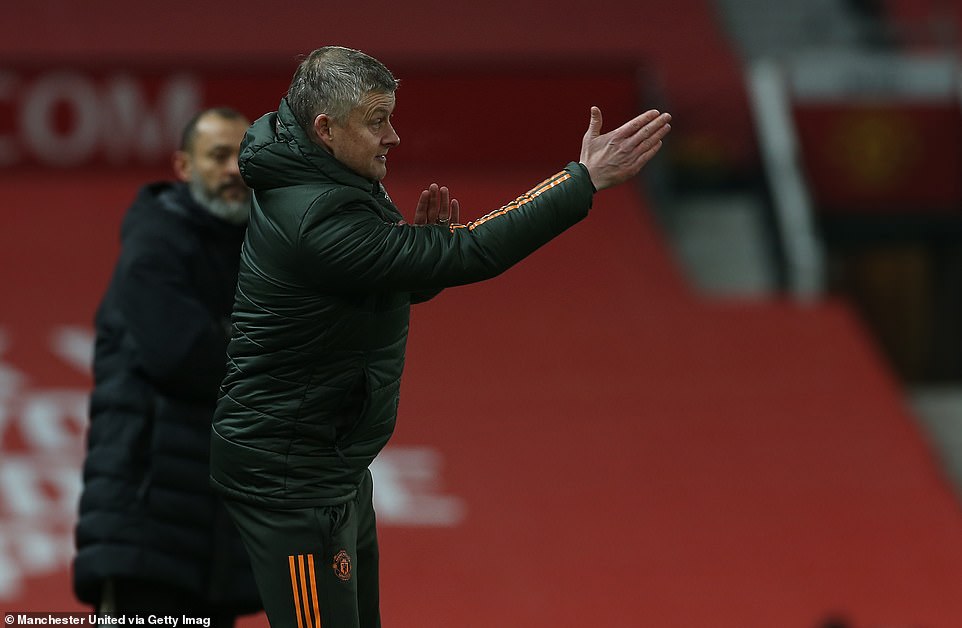 Ole Gunnar Solskjaer cut a frustrated figure at times, but was very animated when the goal went in during injury time

Nevertheless, Rashford’s run took him wide at the Stretford End and Wolves were able to get bodies back. But as time was running out, Rashford cut back inside on to his left foot and tried his luck anyway, firing in to a mass of gold and black bodies from about 12 yards.

Saiss did what he is supposed to do. He placed his hands behind his back and stood his ground. But when the ball struck him the ricochet was not kind. Wolves goalkeeper Rui Patricio was committed to moving in the opposite direction and the ball beat him to his left.

Briefly there seemed to be a delayed reaction from the United contingent in the stand. But then came one of the most prolonged celebrations of this season, on the pitch, in the dugout and in the directors’ box. To feel competitive with Liverpool again after so long – no matter how long it lasts – will mean a lot to this club.

A few yards away, the countenance of the Wolves manager Nuno Espirito Santo was rather different. His team, hit hard by injuries and fatigue, had done enough to take at least a point and this would have felt very tough indeed.

Nuno had two players – defender Ki-Jana Hoever and midfielder Vitinha – starting in the Premier League for the first time. One is 18 and the other 20. Wolves later brought on a teenage striker Fabio Silva. 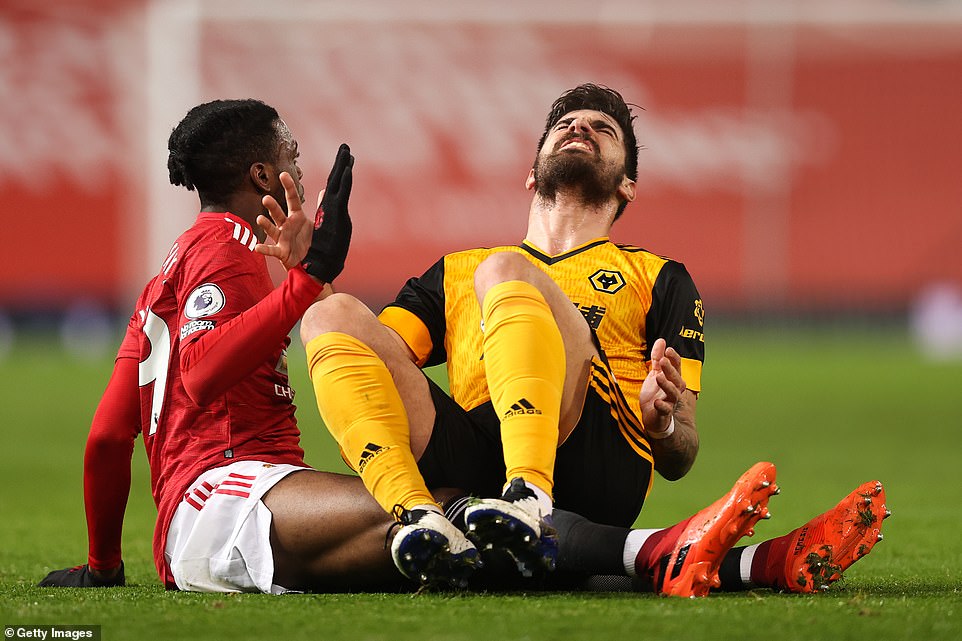 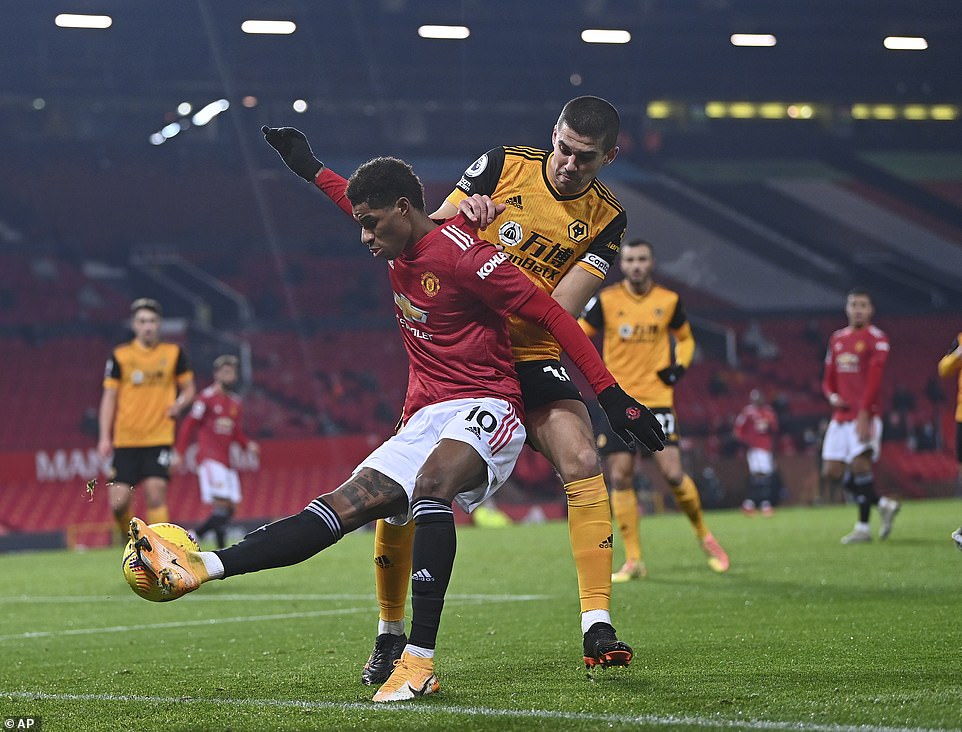 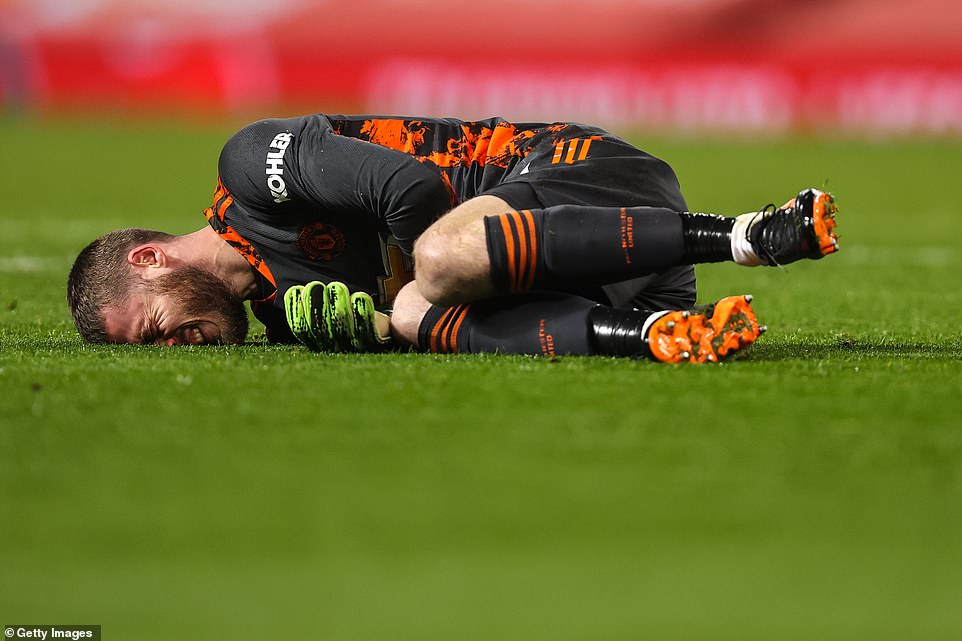 Yet in the first half they were marginally the better team. Saiss headed one chance on to the top of the bar and volleyed another powerfully enough to force David de Gea in to a sharp save above his head. At the other end United struggled for creativity and had just one good chance, Fernandes bringing a save from Patricio with a close range volley after Mason Greenwood found him with a cute cross.

The second period was stale for a while. This has been a busy period of a hectic season and it began to show. For Wolves Adama Traore and wing back Hoever – bought in the summer from Liverpool – showed some good combinations down the right and that will have encouraged their coach. 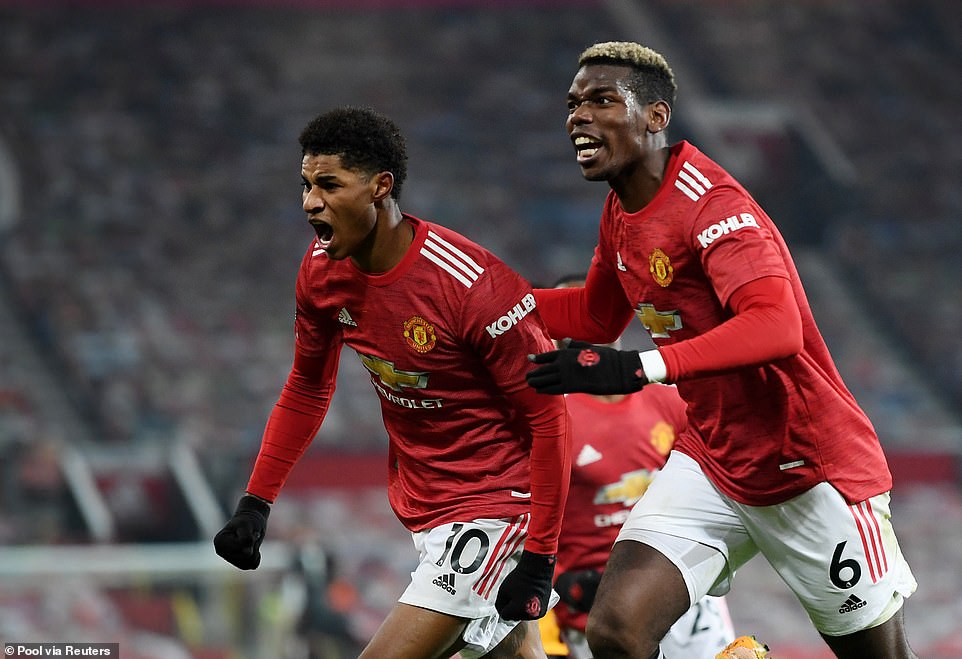 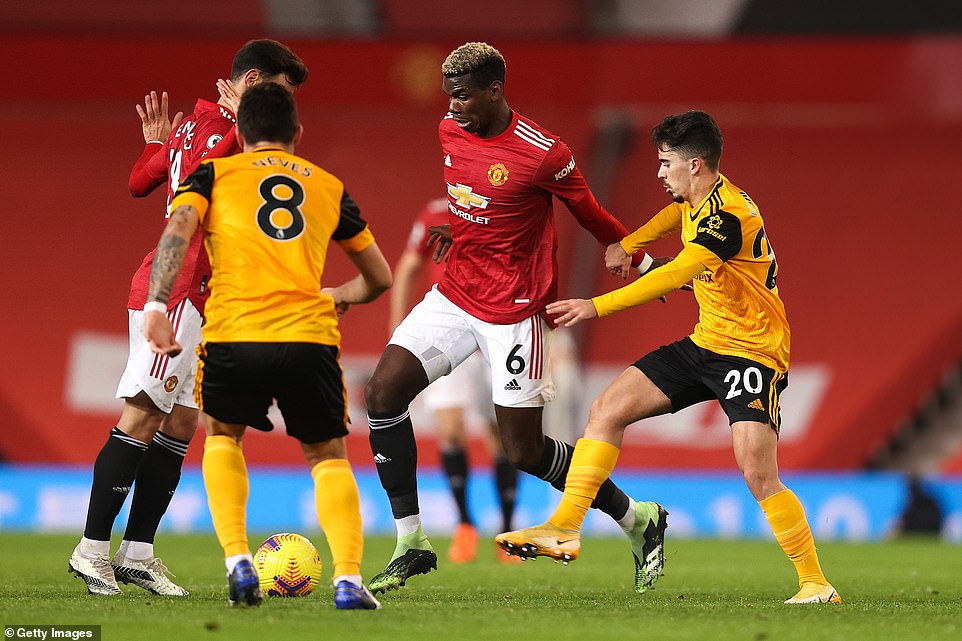 It was United who found some go-forward late on, however. Paul Pogba worked Patricio from distance while substitute Anthony Martial should have done. Edinson Cavani did have the ball in the net from a corner but was offside while United’s penalty appeal after the ball struck Conor Coady in the same incident felt a little hopeful.

So are United genuine contenders for this title? Much of that will depend on Liverpool. If Jurgen Klopp’s team hit their straps when big players return from injury, Solsjkaer’s team will not be good enough to stay with them. Maybe nobody will.

But that is for the future. United are on Liverpool’s shoulder now. They are applying pressure and building confidence. This is a team that lost here to Tottenham 6-1 in October. It has been quite a turnaround. 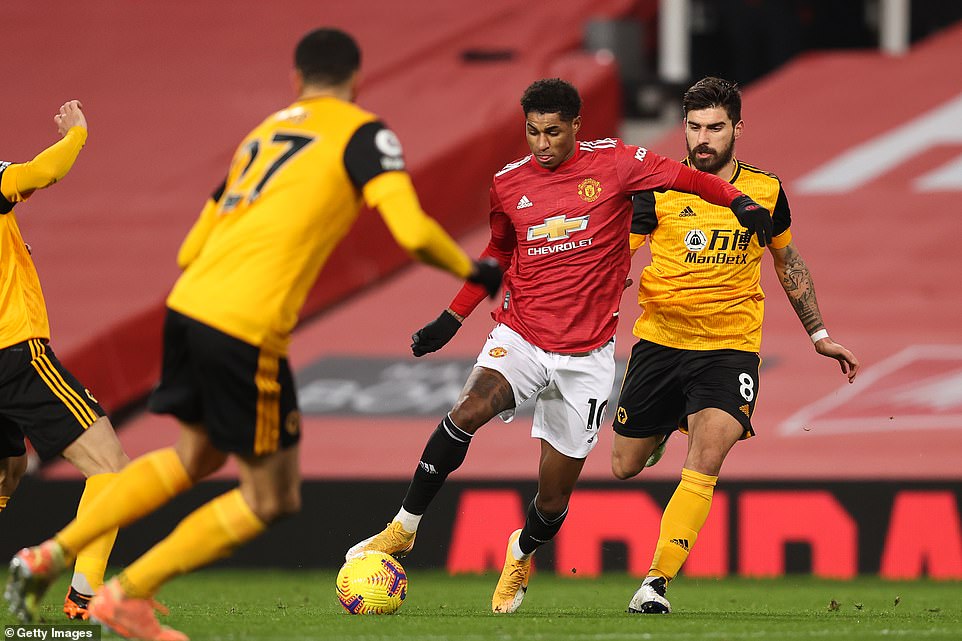 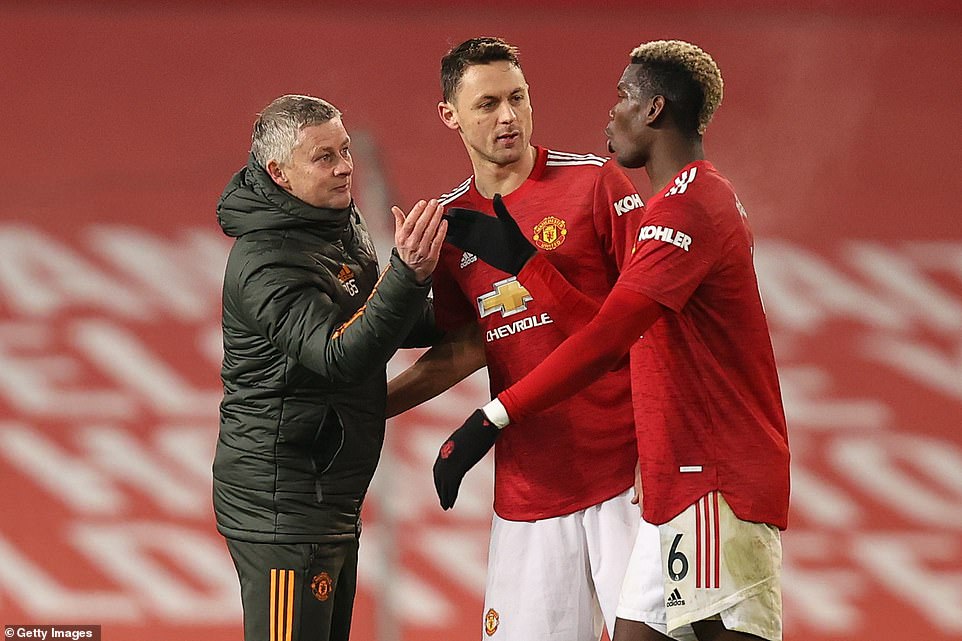 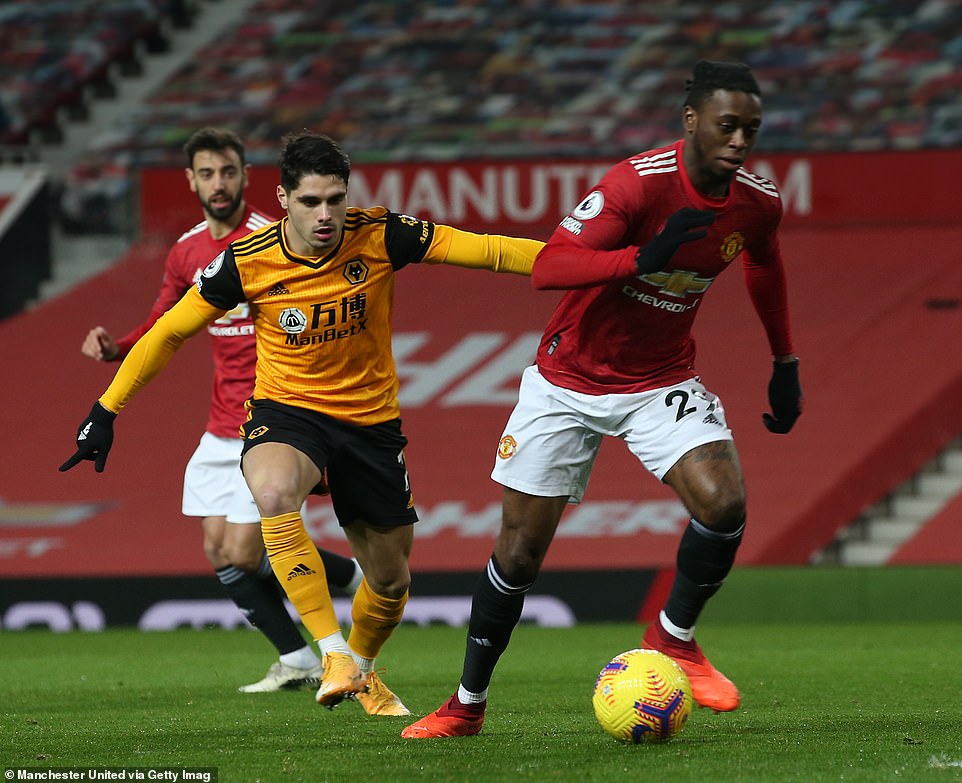