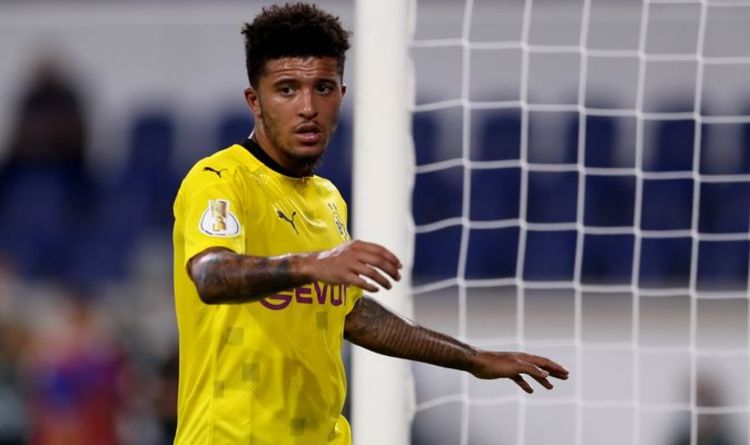 Manchester United reportedly believe Jadon Sancho is for sale this summer despite Borussia Dortmund’s strong stance over any potential deal. The Bundesliga club have held firm on the England international and are adamant he will not leave the club until their £108million valuation is met.

United are yet to test the water with an official bid as of yet but signing a right forward remains top of their priority list.

Sancho has been tracked by United for the past two seasons following his dramatic rise to stardom in the Bundesliga.

Ole Gunnar Solskjaer is said to have already spoken with the player in a bid to persuade him to move to Old Trafford.

His elaborate plans for Sancho have charmed the winger, who wants to join United. Despite that, he remains respectful to Borussia Dortmund and his contract, after signing a new deal last season.

JUST IN: Man Utd think Jadon Sancho ‘will be ready for Crystal Palace match’ ahead of transfer

Flitved tweeted in response to Sancho’s involvement: “Personally, I do not think it means anything. Dortmund still believes he is not for sale. United still believe he is for sale – otherwise they would not have wasted time agreeing with Sancho on the personal terms.”

United are believed to have agreed personal terms and a five-year contract with Sancho but that doesn’t mean they will complete a transfer this summer.

The Red Devils may need the former Manchester City man to push for a transfer in order to force Dortmund’s hand.

Transfer expert Fabrizio Romano claims Sancho is buzzing to join United, something that he has been set on for a while.

“My information is that Manchester United have the agreement with Jadon Sancho on his contract, commissions also for his agents,” he said on his new podcast Here We Go.

“Sancho is buzzing to join Manchester United, because he decided months ago to talk about this opportunity.

“Jadon Sancho for his personal terms and his contract is ready to join Manchester United by weeks, by months.

“The problem is between the clubs, I want to clarify because I think it’s normal that Manchester United have their position and I respect the position of the club.