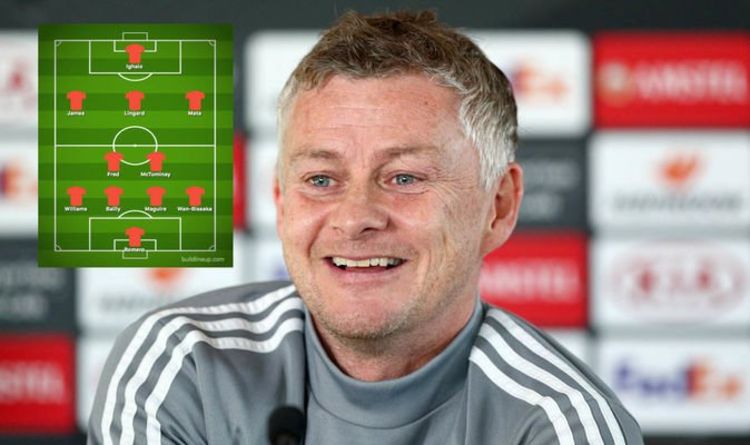 Manchester United manager Ole Gunnar Solskjaer is expected to make seven changes for his side’s Europa League clash with LASK on Wednesday night. The Red Devils go into the showdown at Old Trafford 5-0 up from the first leg. Express Sport will now take a look at how they could line up when they take to the field, with eight changes from their 2-0 win over Leicester last time out expected.

United have kept faith with David De Gea throughout the course of the campaign, despite the Spain international’s erratic performances.

But, in the Europa League, it’s been Sergio Romero’s stage to shine.

The Argentina international started every game as the club won the Europa League in 2017.

And he’s set to start ahead of De Gea against LASK on Wednesday.

Romero has been irked by his lack of minutes and needs some placating from Solskjaer amid transfer interest from Leeds and Everton.

Juan Mata, Odion Ighalo and Daniel James haven’t been given many starting opportunities since the restart.

But the trio all sparkled in the first leg victory over LASK and should be given the nod.

That will give Solskjaer the chance to rest first-choice trio Marcus Rashford, Anthony Martial and Mason Greenwood.

Ighalo, in particular, should benefit.

He’s scored in every game he’s started ever since his loan move from Shanghai Shenhua and will want to add to his goal tally.