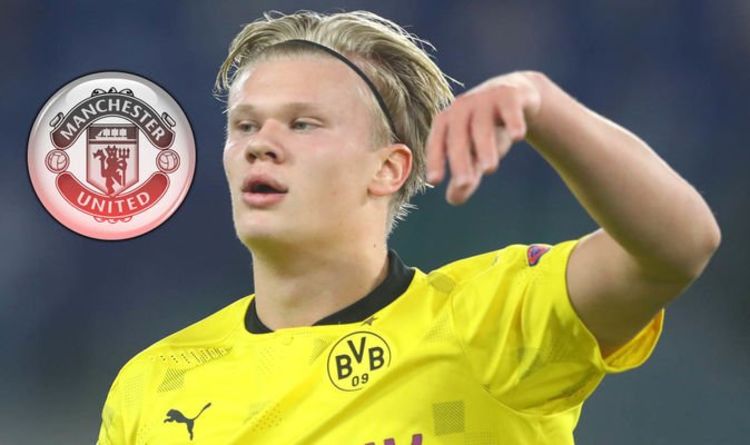 Manchester United may have been rejected by Erling Haaland earlier in the year, but hasn’t stopped Ole Gunnar Solskjaer from still harbouring hopes of signing his compatriot. The Borussia Dortmund star has been sensational over the past year, establishing himself as the hottest prospect in European football. And he’s already talked up two Old Trafford legends.

United were rebuffed by Haaland in January.

Solskjaer and Ed Woodward were convinced they were going to sign the striker from Red Bull Salzburg having jetted out to Austria to meet him for face to face talks.

Haaland had given the club his word that he’d move to Old Trafford but, in the end, a deal failed to materialise.

Despite the forward being keen on a move to the Premier League, Mino Raiola’s intervention saw the picture change.

Raiola wanted an agent fee – something the club were against given how they paid him £41million upon landing Paul Pogba in the summer transfer window of 2016.

And he also wanted a clause installed into Haaland’s Old Trafford contract that would permit invites from the likes of Real Madrid, Barcelona, Juventus and PSG should they wish to go after him.

United said no to both and Haaland moved to Borussia Dortmund, where he’s been nothing short of sensational.

The Norway international has already blitzed 23 goals from 26 matches since moving to the Westfalenstadion, showing the Red Devils what they’re missing in the process.

Hopes of bringing him to Old Trafford haven’t entirely subsidised, however.

According to The Atletic, Solskjaer still plans to sign Haaland. Bridges haven’t been burned between both men and the United manager has him top of his transfer wishlist, along with Jadon Sancho.

The Red Devils are well-stocked in attack with Marcus Rashford, Anthony Martial, Mason Greenwood, Edinson Cavani and Odion Ighalo all capable of playing in the No 9 position.

But with Cavani and Ighalo only in it for the short term, rather than the long run, Solskjaer is already planning ahead.

“My biggest idol as a child, I had a lot of good players (to look up to),” he said in Q&A session on Dortmund’s YouTube channel.

“From Zlatan (Ibrahimovic) to (Cristiano) Ronaldo, to these kind of guys.

“I cannot say one, so I’ll say two: Cristiano Ronaldo and Zlatan Ibrahimovic.”

Ronaldo spent six successful years at United earlier in his career, winning three Premier League titles as well as the Champions League crown during that spell.

And Ibrahimovic, though he was only at the club for 18 months, propelled the club to EFL Cup and Europa League glory during his stint.

Also curiously, Haaland has gone on record to state praise for Solskjaer.

Haaland told TV2 last year: “He (Solskjaer) has had a huge impact on my life, both as a person and as a trainer.

“He won the Champions League and was an incredibly good player. He has taught me a lot.”

He then added his Premier League dream, stating: “I have dreamed of playing for the best clubs in the world my whole life, and I especially like English football.”

But United have a plan and Haaland may be tempted to follow in the footsteps of heroes Ronaldo and Ibrahimovic.