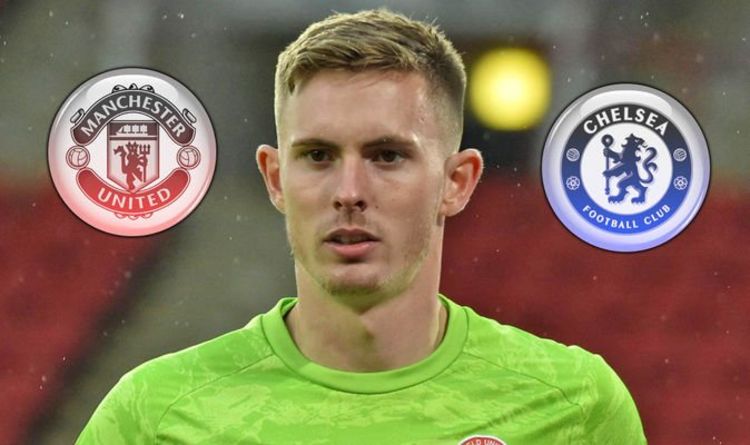 Manchester United have rejected an approach from Chelsea for goalkeeper Dean Henderson ahead of the summer transfer window, it has been claimed. The shot-stopper has sparkled on loan at Sheffield United this season. And Frank Lampard wants to land the 23-year-old as a replacement for Kepa Arrizabalaga, who has struggled for consistency.

Manchester United goalkeeper Henderson has enjoyed a fine campaign at Sheffield United, helping the Blades push for a spot in next season’s Europa League.

He’s kept 13 clean sheets throughout the course of the season with only Nick Pope and Ederson, of Burnley and Manchester City, keeping more.

Chelsea are keen to raid United for Henderson when the transfer window reopens at the end of the season, with Lampard fed up of Arrizabalaga’s inconsistency.

Yet Football Insider say United have knocked back an approach from the Blues.

They reportedly don’t want to let their young talent move to a top-four rival, aware of how that decision could come back to haunt them.

“I actually haven’t spoken to Frank on Kepa but I think they should 100 per cent should sign another goalkeeper because I don’t see Kepa ever making big saves,” Hutchison told ESPN FC.

“I know you have to give young kids time to develop, you look at De Gea when he [first went to] United and he was quite slim and quite slight and developed into a very good goalkeeper.

“But I just see Kepa in the net and I just see Chelsea with him and with a suspect couple of centre-halves I think they look really fragile and really vulnerable.

Solskjaer said in June that Henderson would be No 1 for club and country at some point.

“It’s a different job to be playing for Sheffield United and for Manchester United, there are different, how do you say, he’s got different roles and for me the two years he’s had have been fantastic for his development, played with and against men, played in the Championship and plays now behind a team that play exciting football,” he said.

“And the stats show he’s proved worthy of a few points with his saves.

“He’s learning all the time, he’s passionate keeper, he’s developing, he’s had good coaching there – and for me, one day he’ll be England No.1 and United No.1 and he needs to keep developing.”