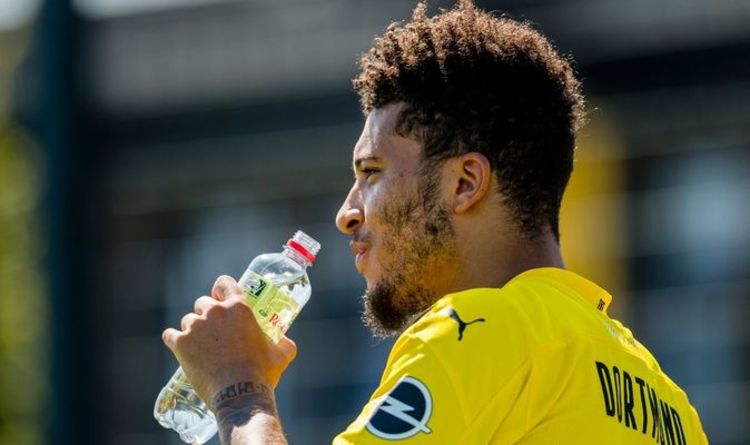 Manchester United officials have been warned by Borussia Dortmund that they will not be receiving a cut-price deal on Jadon Sancho due to COVID-19. The clubs have been in talks over the past few months about the prospect of the England international returning to his homeland.

United are well and truly at the front of the queue for Sancho but Dortmund are optimistic that there will also be interest from the likes of Manchester City, Chelsea, Real Madrid, Bayern Munich and Paris Saint-Germain, should they continue to hold out.

Dortmund have slapped a £120million price-tag on Sancho but many have expected that to change in the wake of the current financial climate.

Yet according to BBC Sport, the Bundesliga giants have told United that they will not be backing down on their valuation of the player and the figure will need to be met to secure a deal.

United have experienced problems throughout the pandemic with the club’s debts rising to a staggering £429m.

But Gary Neville thinks United need to add quality across the board if they’re to compete on all fronts next season.

“You can sign a player in the same position without disrespecting that player, if he’s got the right attitude,” Neville told Webby & O’Neill.

“For me, the idea that we get a right-winger in doesn’t mean we’re going to see Mason Greenwood sat in the stands.

“It’s about having a squad that’s capable of winning the Premier League and the Champions League. You can’t do that with 11 players or 13 players.

“You need 15, 16, 17 players of the highest quality. Yes you can’t have too much disruption with their personalities, but you still need competitiveness and competition for places.”

It is believed that Sancho wants to join United this summer and personal terms are not expected to be a problem.

He is unlikely to force through the move but Dortmund are aware that he wants to play in the Premier Leauge and they’re prepared to grant him the chance to leave this summer.

Exclusive: What Man United have told Chong and Garner ahead of loan moves

Exclusive: What Man United have told Chong and Garner ahead of loan moves