Jamal Musiala is set to extend his stay at Bayern Munich by penning a new five-year contract worth up to £100,000-a-week later this month.

According to the Guardian, Musiala will sign a fresh incentivised deal with the German giants until 2026 after he turns 18 on February 26.

The news is a blow to Liverpool and Manchester United who have been monitoring the England Under-21 international. 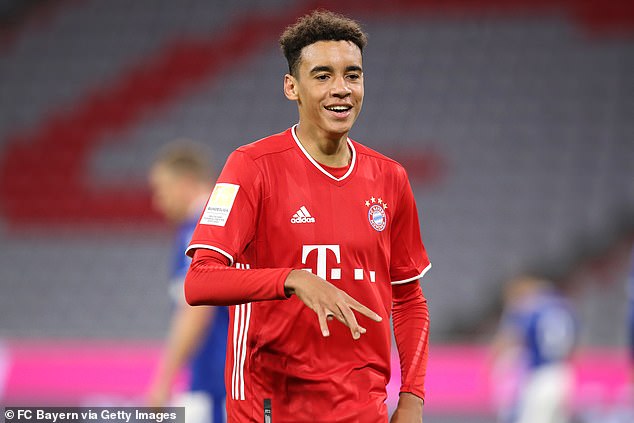 Bayern are desperate to keep hold of the talented teenager who has shone since leaving Chelsea’s academy in 2019.

Despite only being 17, he has already made an impact in Bayern’s first-team – featuring 23 times in all competitions this season and scoring three goals.

His current contract at Bayern is a youth deal and would expire next summer.

Negotiations over a new terms started in December and will reportedly see the attacking midfielder earn up to £100,000-a-week if he reaches certain targets. His basic salary will be lower.

Musiala is currently in a tug of war between England and Germany over his international future – which will only be known once he is capped at that level.

Born in Germany, Musiala spent much of his childhood in England when his family moved there when he was seven.

Since then he played for England Under 15s and 16s before making two appearances for Germany U16s in October 2018. Musiala then won eight caps for England’s U17 side before progressing to their U21s.