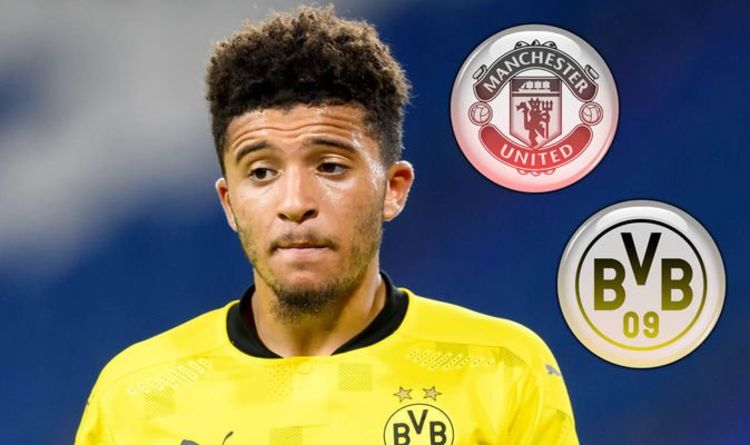 Jadon Sancho is still Manchester United’s main transfer target despite Borussia Dortmund holding firm. And reports claim Ed Woodward is using a cunning tactic to try and get a deal for the 20-year-old over the line. The Red Devils have signed Donny van de Beek so far this summer but know more is required if they’re to compete with Manchester City and Liverpool for the Premier League title.

Ever since securing Champions League qualification in July, Manchester United have been trying to sign Sancho.

But they’re still a long way off an agreement for the Borussia Dortmund star, with the German giants proving stubborn in negotiations so far.

United, as a result, are reportedly looking at alternatives.

Ivan Perisic has been linked amid uncertainty over his long-term future at Inter Milan, while Ousmane Dembele, Douglas Costa and Kingsley Coman have also emerged as potential targets.

More recently, Gareth Bale’s name has been thrown into the hat.

And United are now poised to keep trying on Sancho, with supporters growing frustrated.

Meanwhile, former United star Darren Fletcher recently opened up on Sancho and admitted the 20-year-old ‘ticks all the boxes’ for Solskjaer’s side.

He told The Metro: “At his young age, to be doing what he’s doing at that level of football is fantastic and there’s no doubt that he has got a bright future in the game.

“It’s clearly a position that Manchester United, I feel, have needed for a number of years now, somebody who naturally wants to play off that right-hand side.

“So, I think that it ticks all the boxes in that respect but – at the same time – these transfers are very, very difficult.

“Large sums of money in these times, there’s a lot of circumstances involved in it.

“It’s not just Jadon Sancho and his representatives, it’s Borussia Dortmund, it’s Manchester United and I’m sure there will be other clubs interested in him as well.

“He’d be a fantastic acquisition for anyone who gets him.”

Sancho scored 17 goals and registered 17 assists for Dortmund across all competitions last season.

But they still ended the campaign without a trophy, with the German side finishing second to Bayern Munich in the Bundesliga standings.