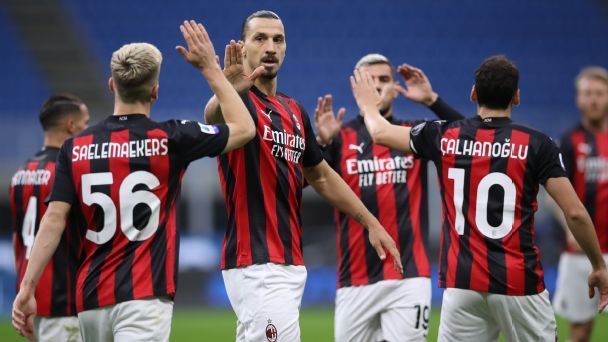 Zlatan Ibrahimovic, recently recovered from the coronavirus, scored an early brace to secure a 2-1 win for AC Milan over neighbours Internazionale on Saturday.

Ibrahimovic, 39, put Milan in front after 13 minutes, tapping the ball in from the rebound after his penalty was saved by Samir Handanovic, and then struck again three minutes later from Rafael Leao’s cross.

– Stream new episodes of ESPN FC Monday-Friday on ESPN+
– Serie A on ESPN+: Stream LIVE games and replays (U.S. only)

In a breathless first half, Romelu Lukaku pulled one back for inter in the 29th minute, the first Serie A goal Milan have conceded this season. Inter were awarded a penalty in the 75th minute but it was revoked for offside in the build-up.

Milan have won all four games so far and lead the standings with 12 points, while Inter have seven after their first defeat of the season.