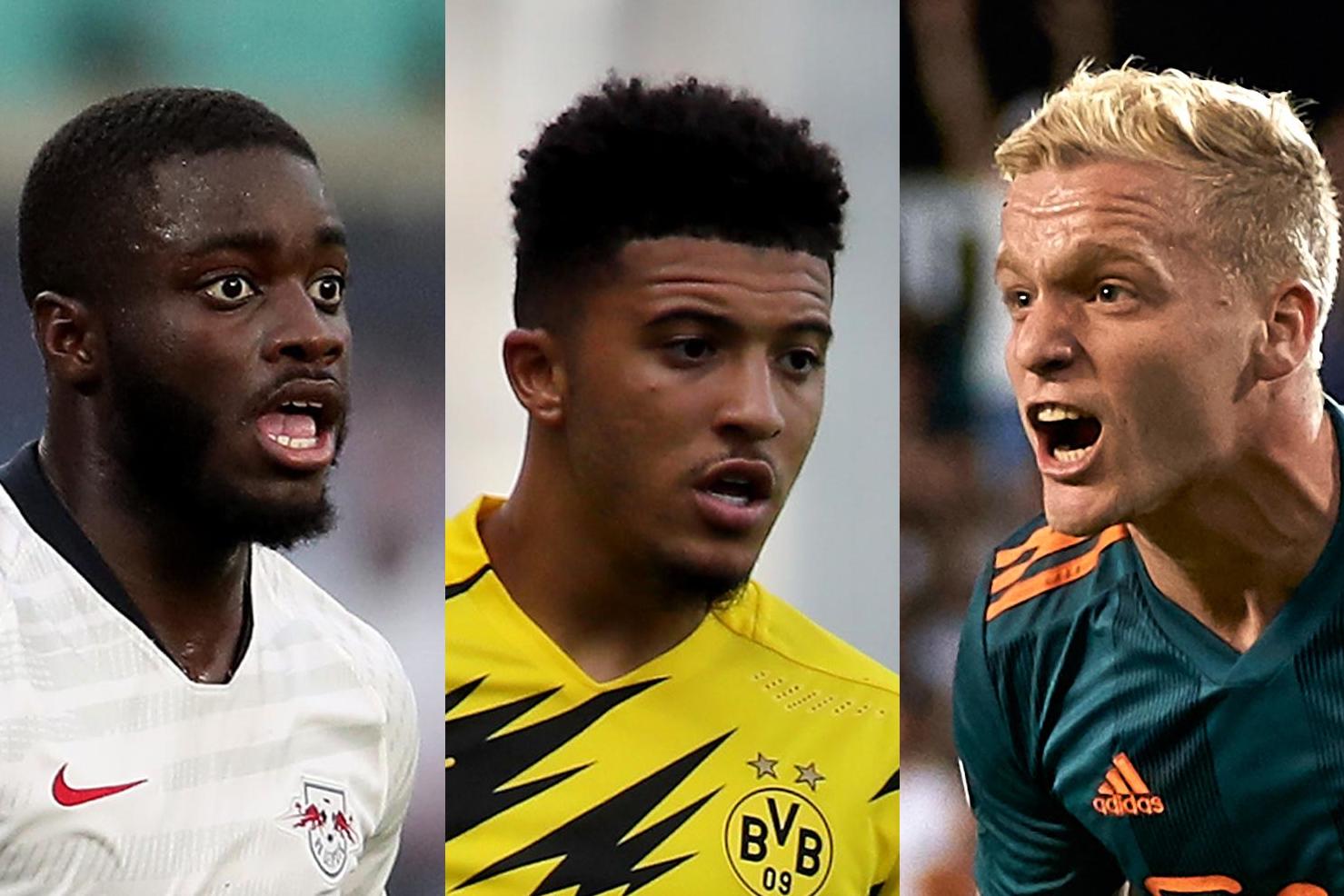 Manchester United are aiming to build on a third-placed Premier League finish, with Champions League football also thrown into the mix for the 2020-21 season.

Ole Gunnar Solskjaer‘s Red Devils went on a thrilling run of results following the restart of the season, with United securing a return to Europe’s top club competition during the run-in.

But if United are to bridge the gap between second-placed Manchester City and champions Liverpool, signings will be key.

Donny van de Beek has now completed his move from Ajax, signing a five-year deal with the option of a further year. Jadon Sancho remains a top priority in attack – and Dayot Upamecano is now reportedly also on Solskjaer’s wishlist to bolster an already-strong defence.

With plenty of business left to be done, here’s how Solskjaer’s side could look for the new season…

This is an area United probably thought they had solved when David de Gea signed a new long-term contract in September 2019.

However, his alarming drop-off in form in 2019/20 has seemingly led to a rethink, with Dean Henderson looking likely to compete for the No.1 jersey after returning from his loan at Sheffield United.

Sergio Romero lost his role as United’s cup keeper during the run-in despite De Gea’s shaky displays. With Joel Pereira leaving on loan, it wouldn’t be a surprise to see Romero leave on to let De Gea and Henderson battle it out – but the Spaniard will start the season in goal.

Should United firm up their reported interest in Upamecano, then the 21-year-old would likely be seen as the first-choice partner to Harry Maguire in central defence.

Victor Lindelof may well be given the chance to keep his starting role as Upamecano adapts to English football, with the Swede forming a good understanding alongside Maguire last season.

However, Upamecano was a first-choice centre-back in a team which reached the Champions League semi-finals last season, and is unlikely to swap that for sitting on the United bench – even if he gets a big salary increase.

Aaron Wan-Bissaka is Solskjaer’s established first-choice right-back, with Diogo Dalot given few chances to make the role his own last term, even losing his backup role to Timothy Fosu-Mensah during the run-in.

On the left side, Luke Shaw won back his starting role from Brandon Williams before injury ended his season early. Williams should get plenty of opportunities at left-back, particularly if Shaw’s injury problems continue. However, there have been plenty of reports linking United with Real Madrid’s Sergio Reguilon, with United holding the aces in the race for the 23-yeaer-old full-back.

Another option for Solskjaer would be to revert to the three-man defence he used at times last term: with Maguire, Lindelof, Shaw, Eric Bailly, Phil Jones and potentially Upamecano at his disposal, a trio of centre-backs would also offer cover for the lack of a young, top-class defensive midfielder in the squad.

Solskjaer has plenty of options in the middle, but given he has preferred two holding players behind an attacking midfielder since Bruno Fernandes’ arrival, he will need them considering what a draining season this could be.

Van de Beek now offers versatility in that he featured in central, defensive and offensive midfield positions for Ajax in 2019/20.

The Netherlands international will not necessarily be a guaranteed starter for United off the bat, but his arrival will strengthen a squad which looked short of quality depth during the run-in.

Van de Beek will likely initially compete for chances in the holding roles with Paul Pogba and Nemanja Matic. Scott McTominay is seen as a long-term prospect for United, though Fred’s future may be a little more uncertain after Van de Beek’s arrival – and Andreas Pereira is expected to be sold if a buyer can be found.

Van de Beek should also rotate with Fernandes in a more advanced role in games United would expect to dominate, particularly when Solskjaer is balancing domestic and Champions League games in the winter.

During the run-in, a front three of Anthony Martial, Marcus Rashford and Mason Greenwood tormented opposition defences, while their ages – 24, 22 and 18 respectively – should mean there is more to come.

However, when that trio failed to score, Solskjaer was not exactly keen on the other options at his disposal. Dan James played more football than anybody would have expected and deserves more time to adapt, while Solskjaer appeared to lose faith in Odion Ighalo as results became more important.

Juan Mata is an elder statesman of the squad and is still capable of providing quality, but that will likely be restricted to cameos, so there is a clear need for more quality.

Sancho remains United’s top priority this summer, though a deal with Borussia Dortmund is dragging on and proving difficult.

Should United and Dortmund manage to find a solution which sees Sancho arrive at Old Trafford, the England international would almost certainly be Solskjaer’s first-choice starter on the right-hand side of attack with Martial up front and Rashford on the left.

That may seem harsh on Greenwood, but Solskjaer is keen to give the 18-year-old time to develop his game away from the immediate need for results.

Regardless, having top young forwards all pushing for starting roles is a problem Frank Lampard and Pep Guardiola will have this season, and that is the level United must be at – let alone matching Liverpool.

So, here’s how Manchester United could line up next season with their potential signings…