Ipswich Town will feel a debt of gratitude to Southampton. For so long, they bore the scars of being the only team to concede nine goals in a Premier League fixture.

Now, in the space of just over 15 months, Southampton have shipped that many not once, but twice. Losing 9-0 at home to Leicester City in 2019 was bad enough but now the Saints share Ipswich’s pain of letting in that same number at Old Trafford.

Ipswich’s 9-0 drubbing by Manchester United back in March 1995 is arguably worse, though. They played with the full 11 men through their nightmare, while Southampton were reduced to 10 men just 79 seconds in on Tuesday night. 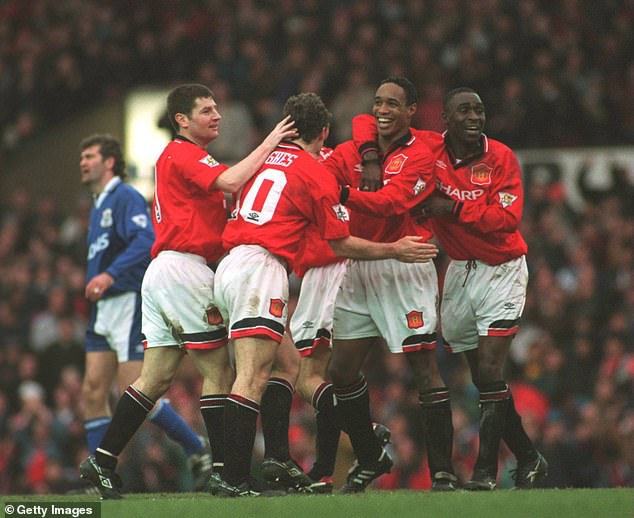 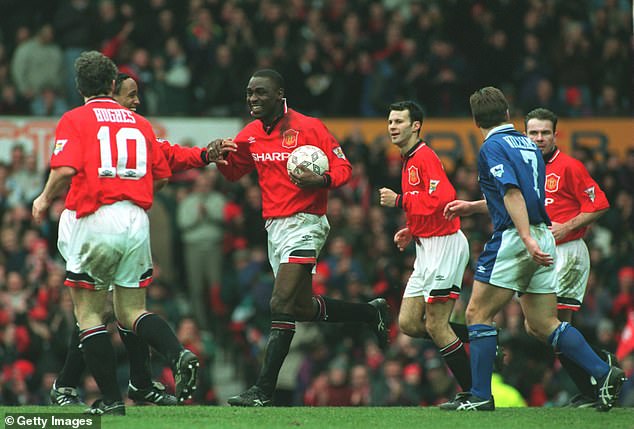 Cole was the star of the show that afternoon at Old Trafford, scoring five of the nine goals 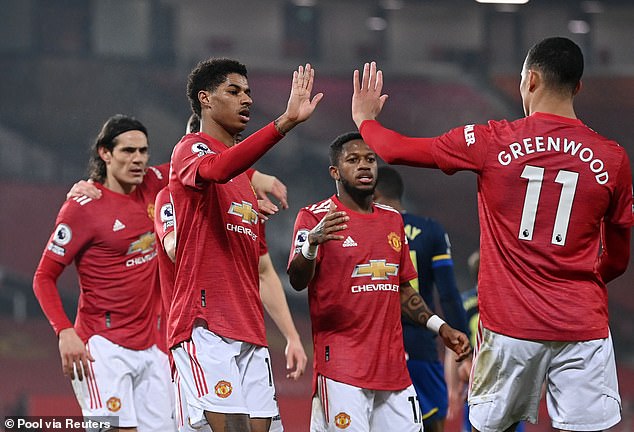 United have now repeated the feat, scoring nine against Southampton on Tuesday evening

Back then, everybody expected title-chasing United to win handsomely against second-bottom Ipswich but the scoreline was seismic. Nobody had scored more than seven in the admittedly short-lived Premier League era.

United had previously won 9-0 against Walsall in 1895 and 9-0 against Darwen in 1898, both in the Second Division and both when the club was still known as Newton Heath.

Matt Busby’s European pioneers had thrashed Anderlecht 10-0 in their first-ever home fixture in the European Cup, back in 1956, but this was a humiliation for the modern age with highlights on Match of the Day.

Read through United’s line-up that afternoon and you can understand why they racked up so many goals.

Andy Cole, who became the first Premier League player to score five in a game, partnered Mark Hughes in attack. Ryan Giggs, then 21, was at his baggy-shirted best on the left wing with the equally incisive Andrei Kanchelskis on the right. 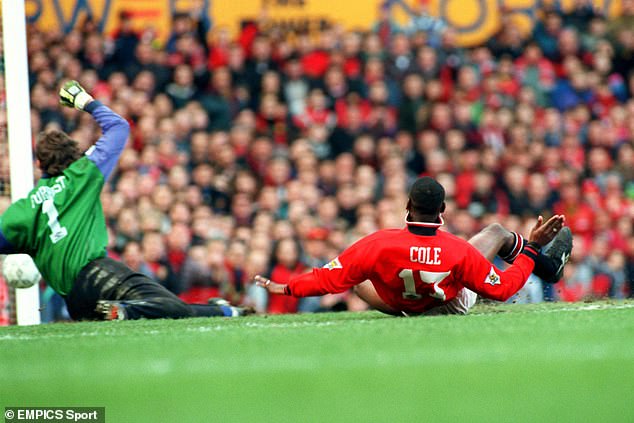 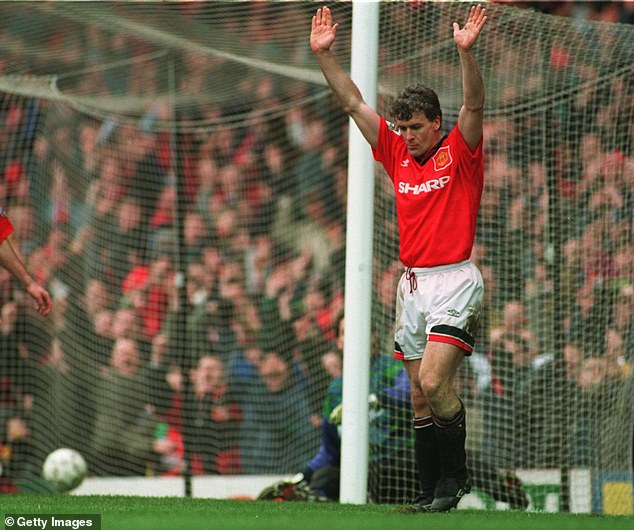 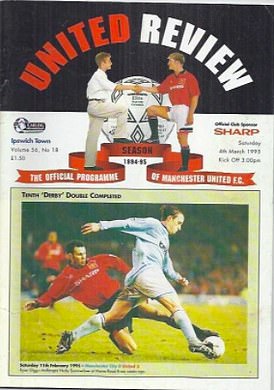 Roy Keane, a central midfielder, was actually slotting in at right-back that afternoon. Steve Bruce and Gary Pallister in central defence had little to deal with and Peter Schmeichel in goal could have done with a deckchair.

You can easily imagine the scoreline being in double figures had Eric Cantona been in United’s team, but he was serving his nine-month suspension for that infamous kung-fu kick on a fan at Selhurst Park.

Ipswich were always destined for a relegation battle in what was the final season of the 22-team Premier League. Four went down as part of the downsizing to 20 and Ipswich would ultimately finish bottom, some 21 points from safety.

Which made it all the more remarkable they’d stunned United 3-2 at Portman Road in the September.

United’s Brian McClair was annoyed that Ipswich ‘were more than exuberant in their celebrations’ and so Alex Ferguson’s side were fired up for revenge as they chased down leaders Blackburn.

Their cause was helped by Ipswich fielding a defensive line – David Linghan, Frank Yallop, Neil Thompson and club legend John Wark, in his third spell – with a combined age of 129 and described in one match report as ‘one of the slowest back fours the game has ever seen.’

Their goalkeeper Craig Forrest must have expected the afternoon from hell and so it proved.

Ipswich’s resistance lasted 15 minutes until Roy Keane’s bobbling shot from just outside the box found its way in off the post.

Giggs was given the freedom of Manchester to burst down the left wing and cross for Cole to slide in his first four minutes later and the contest was all but over.

Cole was in the right place to score on the rebound eight minutes before half-time after Hughes’ spectacular overhead kick had come back off the crossbar.

Cole picked up a knock when Wark slide tackled him in a hopelessly late attempt to prevent the goal but was determined to play on, sensing more goals were on offer.

3-0 up at half-time, Ferguson demanded his players finish the match with six goals. To aid this, he introduced another speedster in Lee Sharpe in place of Keane.

His team did rather better than that – they had seven within 20 minutes of the restart. Cole headed in No 4 from Denis Irwin’s cross, a goal later credited to him having initially been recorded as a Yallop own goal.

More fancy footwork by Giggs then teed up Hughes for a great back post finish off the underside of the bar before the Welsh forward nodded in the sixth after Forrest had saved from Giggs.

Cole lashed in his fourth of the afternoon after the hapless Forrest had kept out McClair’s shot before a moment of comedy that summed up Ipswich’s afternoon. 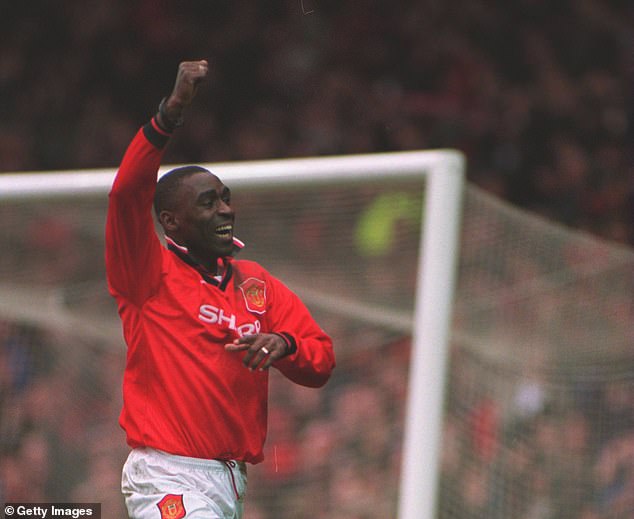 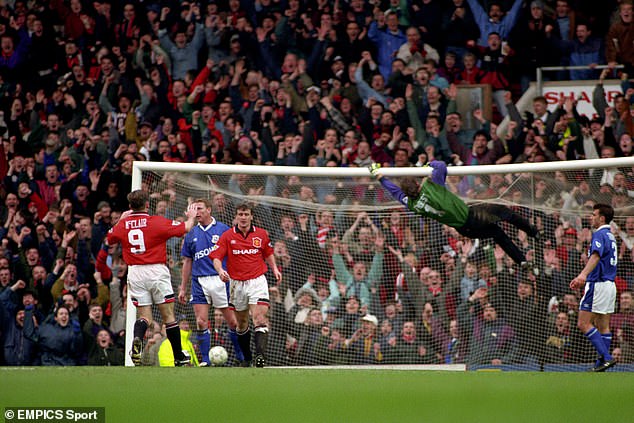 Forrest came charging 30 yards off his line to reach the ball before Hughes, but handballed and was booked. Instead of racing back to his goal, the keeper ambled and Paul Ince lofted the quickly-taken free-kick into an empty net.

Three minutes remained when Cole spun inside the box and fired home his fifth and United’s ninth. ‘We want 10’ chanted the United fans. ‘We want one,’ responded the away fans watching through their hands.

Ferguson later admitted he felt sorry for the Ipswich boss George Burley and was ‘praying that United wouldn’t reach 10’. But Fergie did admit ‘that was as near to perfection as you can get.’

Burley didn’t appear for post-match media duties, such was the shame.

‘I’m very proud of being the first player to score five in the Premier League,’ he later said. ‘But my goals just blur into each other.’

Forrest, who also let in seven when he played for West Ham at Old Trafford in 2000, actually bumped into Cole while on holiday in Barbados years later and introduced the former striker to his wife ‘as the man who made his life a misery’.

The nine goal margin did wonders for United’s goal difference but it didn’t have Blackburn, who beat Aston Villa 1-0 that day, quaking in their boots. ‘You get three points whether you win 9-0 or 1-0,’ said a dismissive Rovers boss Kenny Dalglish.

Rovers’ star striker Alan Shearer was grumpy about Cole’s five-goal feat though, having only scored three against Ipswich a few weeks earlier. ‘There are no easy games in football… apart from Ipswich at home.’ 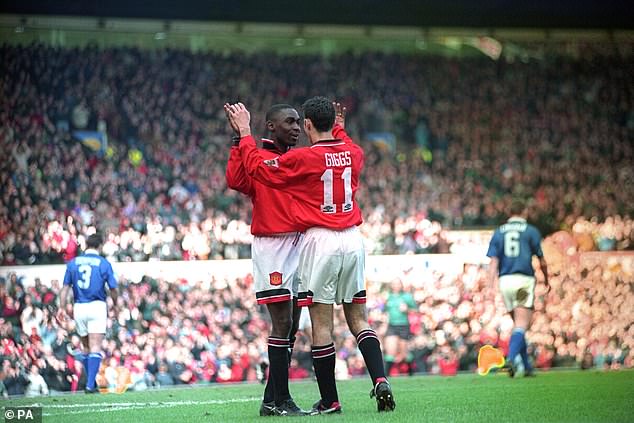 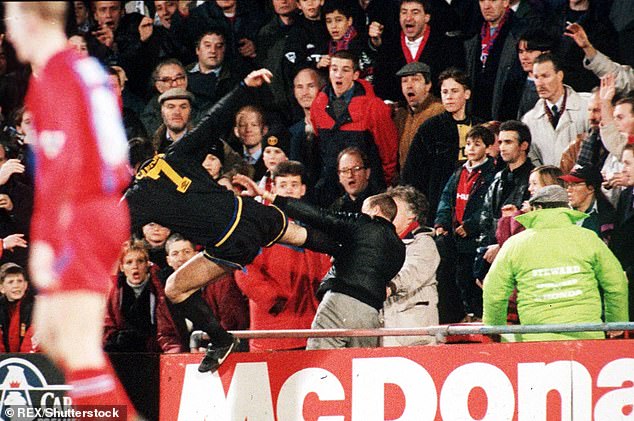 Even more remarkable was that United racked up so many goals without talisman Eric Cantona, who was serving a nine-month suspension for his kung-fu kick on a Palace fan 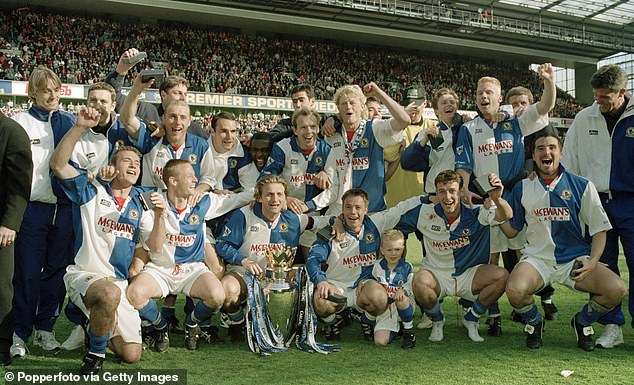 In the end, United would miss out on the Premier League title to Blackburn Rovers

However, it would be Rovers and not United who lifted the Premier League trophy that season.

A 2-0 defeat at Anfield, goalless draws at home to Leeds and Chelsea, then that exasperating final day draw at West Ham proved costly for Ferguson’s team, as they finished a point behind the champions.

The 9-0 battering would live long in the memory, however. Now Southampton join Ipswich in infamy.