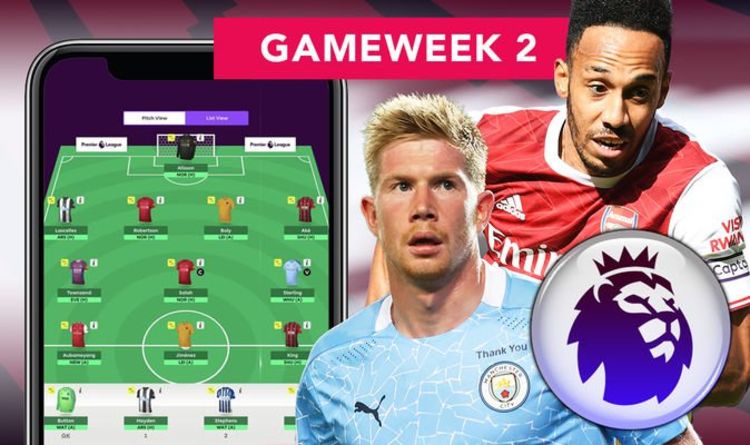 Fantasy Premier League‘s return saw many of big-hitters deliver huge hauls. Mohamed Salah, Pierre-Emerick Aubameyang and Jamie Vardy all got themselves on the scoresheet in Gameweek 1. This week, however, Manchester City and Manchester United assests will join the party.

FPL managers have until 11am on Saturday, September 19, to get their teams in order.

And to help you out, Express Sport looks at seven players to consider in your line-up.

Pickford was in fine form as Everton impressed in their opening round win over Tottenham.

The England international kept a clean sheet and made five important saves.

He is the most-signed goalkeeper ahead of GW2 and it’s easy to understand why as the Toffees host newly-promoted West Brom before facing Crystal Palace and Brighton.

Gabriel looks like he could be a bargain in FPL, starting his Arsenal career with a debut goal and a clean sheet in their 3-0 win over Fulham.

That performance earned his managers 15 points, including three bonus points.

Next up for the Gunners is the visit of West Ham.

Burnley kept 15 clean sheets last season so having one of their defenders in your side could be worthwhile.

Tarkowski was among those to impress, returning a total haul of 143 points.

The Clarets weren’t involved in Gameweek 1 but they take on Leicester this weekend.

Despite scoring at the weekend, Aubameyang is one of the most transferred midfielders this week, most likely to make way for De Bruyne.

The Belgian returned more points than anyone else in FPL last season, making it hard to leave him now that he’s available again.

City face a tricky opener at Wolves but any goalscoring return is likely to feature De Bruyne, who scored 13 goals and provided 23 assists last season.

Fernandes had an immediate impact when he arrived at Old Trafford in January.