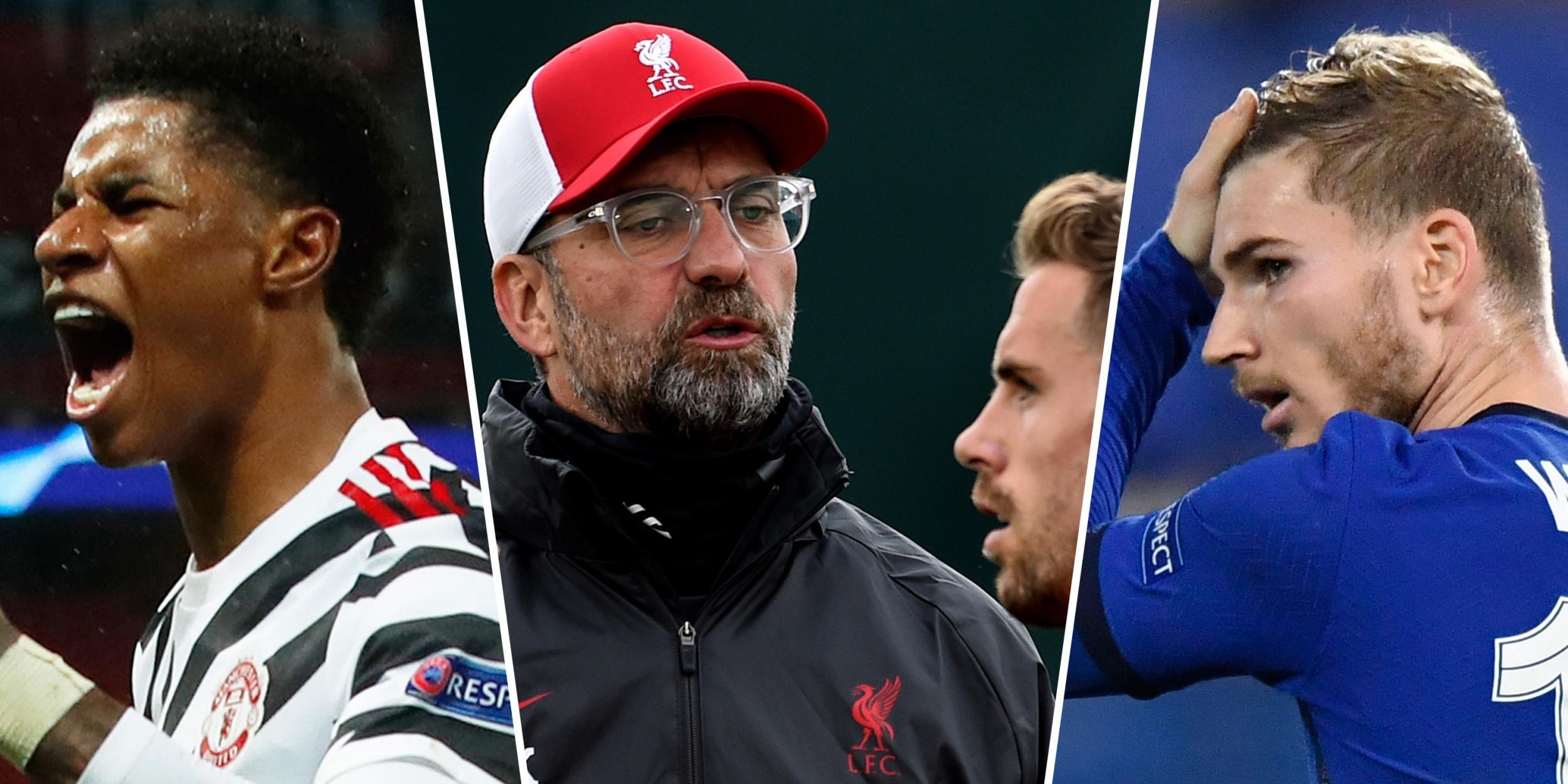 Champions League football is back this week, with plenty more drama set for Wednesday after Tuesday’s action.

Liverpool and Manchester City kick off their 2020/21 campaigns against Ajax and FC Porto respectively this evening, following on from Chelsea and Manchester United’s exploits the night before.

Chelsea saw out a goalless draw against Sevilla at Stamford Bridge, while United stunned PSG with yet another late victory in Paris.

There are more of Europe’s top sides in action tonight, with Bayern Munich taking on Atletico Madrid and Inter Milan also kicking things off.


Well, the Champions League returned with a bang last night, didn’t it?

Marcus Rashford once again found himself sliding on his knees towards the Parc des Princes corner flag as Manchester United secured another big win in Paris in the standout result. Chelsea were frustrated by Sevilla at Stamford Bridge.

It’s Liverpool and Manchester City’s turns tonight. Stick with us.

Well, while there wasn’t too much drama at Stamford Bridge, Frank Lampard will be happy with Chelsea’s defensive display against Sevilla.

We’ll be back in the morning for all the latest reaction, news and build-up to Wednesday night’s Champions League games, which are as follows…

Silva should be fit for Old Trafford trip

Frank Lampard has played down injury concerns around Thiago Silva ahead of Chelsea’s trip to Manchester United on Saturday.

Silva landed awkwardly in the second half against Sevilla, but finished the game and afterwards Lampard was quick to allay any fears over his fitness.

“He has not flagged it, so I think we are OK,” said Lampard, who praised Silva for his display at Stamford Bridge. “I thought Thiago showed the things I have spoken about, his experiences and qualities. [Edouard] Mendy had one good save to make and he made it, and was good with his feet. Against a very good team it was a very organised defensive performance. I am very pleased.

“To get through the game will give us good confidence. We are going to get better. I keep saying the same thing but we have not had the personnel in there playing regularly, getting relationships and working off each other. The more we do that then we will get better naturally.”

It was a big night for Axel Tuanzebe in Paris. The Manchester United academy graduate hasn’t played in 10 months, and his first game back is up against Mbappe and Neymar… but he performed superbly.

United boss Ole Gunnar Solskjaer said of his display: “When you go away to a team like this against Neymar and Mbappe you have to defend well and your keeper will have to make saves. Axel Tuanzebe is a top defender and his first game in 10 months was testament to the quality he has.”

The Chelsea left-back told BT Sport: “The important thing is the clean sheet. We knew people would be looking at us after conceding three goals at the weekend. We were solid defensively against a good team and didn’t give them many chances so we’ll take a draw and a clean sheet.

“In general as a team it was, I won’t say comfortable because we were under pressure at times, but we were organised as a team. I thought defensively we were very good.”

Speaking to BT Sport, Manchester United’s match-winner said: “Of course it’s a nice feeling. More importantly, we won the game. We’re in a strong position now in the group but it’s the first game. The concentration levels we showed today we have to take forward into the next game.

“For me, they were both opportunities to win the game. As a striker, in the game late on, that’s the mentality. You might only get one chance. It gets us the three points.”

Three minutes of injury time. Chelsea would be desperately disappointed to let it slip here. It is has been a mature and solid performance against a very good side.

Advertisement
87 mins: I said it might take a bit of quality to decide it, and it comes from Rashford!

Out of nothing, the United forward switches pace 25 yards out to beat his man from a standing start, and finds space with a touch out wide before blasting a fierce effort across Navas, off the post and in!

Here’s how things stand in the final few minutes…

Time is ticking by at Stamford Bridge. While this isn’t a must-win game for Chelsea, the unspoken rule of Champions League group progression is that you win your home games, and take anything you can get on the road. This will put pressure on the Blues away from home if it ends goalless.

Huge chance for United! The visitors break through Rashford, who feeds Fernandes – he tries to give Martial a tap-in, but the blocked pass falls to Rashford… and it’s a great save from Navas!

A stunning game so far.

It’s end-to-end here, with both attacks and defences at full stretch. Neither side is settling for the draw, and it’ll just take that little bit of quality to decide things here.

Lionel Messi is at it again!

The first player to score in 16 consecutive Champions League seasons…

No sense of Lampard being happy with what he’s got. Ziyech and Kovacic are on. Can they create an opening?

First change for the Blues, as Hakim Ziyech is on for Mason Mount.

Lampard will be hoping Ziyech can offer a little more unpredictability to their play.

The Blues are pushing for that opener, but Werner sees a low drive well held by the ‘keeper. Don’t bet against him making the breakthrough after his brace at the weekend…

Disaster for United as Mbappe hits the bar, and PSG win a corner. Neymar’s delivery isn’t particularly amazing, but Martial glances it into his own net!

Game on in Paris…