What is it that is said about title-winning teams? What they do, where they do it, and what the weather is like on that particular day of the week.

If it’s true, then it is time to take Manchester United seriously. This was a big result, hard-fought and hard-won against the Premier League’s awkward squad. It is a victory that puts them top of the league in January for the first time since Sir Alex Ferguson was manager and claimed his final league trophy. Now for Liverpool, away.

Yet United will take the competition’s only unbeaten away record to Anfield and a coach-load of confidence. Just as if it looked as if this game might peter out to a goalless draw, they found a way to win. That’s what champions do, too, and while Ole Gunnar Solskjaer was right to say nobody remembers January’s league leaders, this was still a statement. 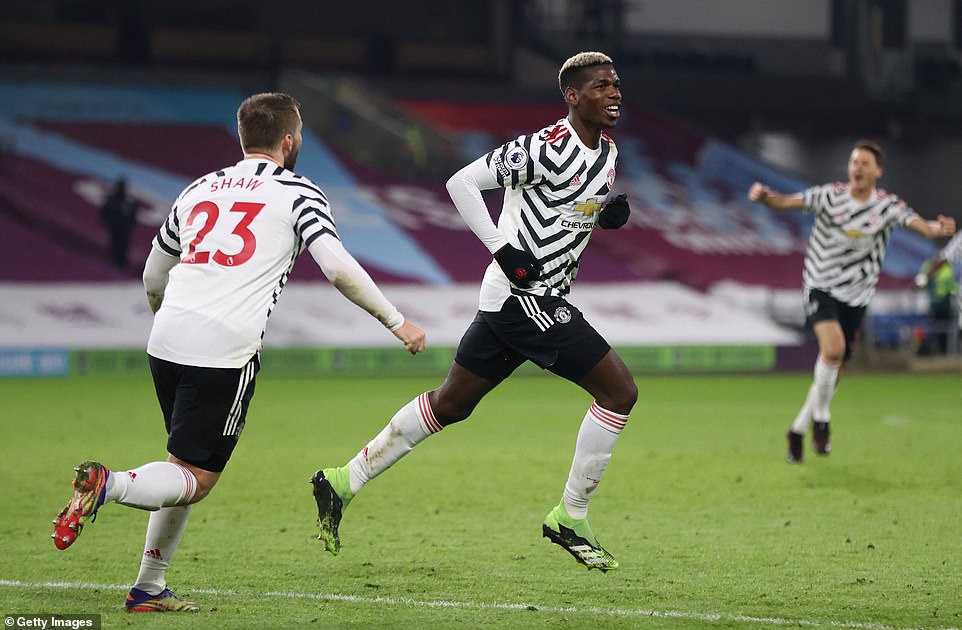 Paul Pogba celebrates his goal, which ended up sending Manchester United to the top of the Premier League table

A goalless draw would have given them a slender advantage; three points is quite emphatic. United are getting it together. And they have good players, too.

Like Paul Pogba, who is finally looking less like the club’s problem child and more like one who can decide moments and matches. He did on Tuesday night, crowning a fine performance with the winning goal after 71 minutes.

He doesn’t get many these days, now Bruno Fernandes takes penalties, but this was a cracker. Marcus Rashford, who had done little to this point, crossed from the right and Pogba met it on the volley from outside the area, the ball emerging through a crowd of players, clipping Matt Lowton and appearing to take goalkeeper Nick Pope by surprise.

Could Pope have done better? The trajectory of the ball changed but it was still reasonably straight. But the connection was lovely, the technique to keep it down special, too. This was the work of the player it was thought United had signed more than four years ago.

And it was a deserved win, too. Burnley came back into it late but barely mustered a shot on target and United’s defence was robust. It has to be up here — that is why Turf Moor has its place in English football folklore.

There is a reason the cold Tuesday night in Burnley is the cliche of choice to describe a difficult away game, and this was the embodiment of that. Relentlessly physical, frantic, taxing, tough.

But it wasn’t just Burnley who were up for the scrap. The most spiteful challenge of the half came from Luke Shaw, who was booked and survived a review into a possible red card, and Manchester United very much gave as good as they got. The better teams usually do, and United went into this game with the only unbeaten away record in the Premier League.

But it was hard. Bruno Fernandes hit the deck early, claiming a dig in the ribs from Erik Pieters, while Pogba chose not to take on Chris Wood in the air, preferring to collapse in a heap instead.

For those who remember Vic and Bob’s Big Night Out, it was the sort of inexplicable slow tumble perfected by Bob Mortimer, accompanied by the declaration, ‘Oh Vic, I’ve fallen.’ Rightly, referee Kevin Friend was having none of it.

He had enough on his hands dealing with an incident after 23 minutes. Shaw went through Johann Gudmundsson at one end, a foul that was missed by Friend, but left Burnley’s players livid. The ball played forward, Edinson Cavani sped away and was chopped by Robbie Brady outside the penalty area. Friend immediately awarded a yellow card, while the home side screamed at him to ‘Look at the f****** red at the other end.’ Prompted by the VAR, he did. ‘Checking possible red card,’ it was announced.

At first it was presumed to be a possible escalation for Brady, which would have been harsh given the passage of play began with a plain foul by a Manchester United player. The images on the screen, however, showed Friend studying Shaw’s offence first. If he made the right call there the rest of the play was moot, He did. He looked at Brady, too, just in case but pulled the play back for a Burnley free-kick and showed Shaw a yellow. Brady’s punishment would then have been wiped.

Yet if Shaw and United got away with one then, they looked hard done by soon after. In the 36th minute, Shaw struck a lovely deep ball which was met by Harry Maguire at the far post, powering a fine header past Pope.

In doing so, he came in from behind Pieters and flattened the Burnley man in the process. It was more roadkill than a foul, Pieters simply in the way as Maguire rose to meet the ball. In Stockley Park, however, it was seen differently and United’s lead was erased.

Burnley, however, would have felt aggrieved to have trailed at half-time. They had played well, forced the odd chance, kept United’s defence on its toes. In the 21st minute, Ashley Barnes laid the ball off to Wood, whose shot was bravely blocked from close range by Eric Bailly.

But United got close. A Shaw square pass to Fernandes brought Pope into the action for the first time after 16 minutes, and when Nemanja Matic found Anthony Martial eight minutes later, the striker fired disappointingly wide. Far better from the Frenchman was an effort in the last minute of the half, a curling, dipping shot that Pope flicked over the bar.

United upped the pressure after half-time, as is so often the case, and should have taken the lead after 52 minutes, Fernandes found Martial on the right and his cross fell to Cavani, who shocked with a clumsy miscue in front of goal.

Fernandes then tried his luck on the hour, a tame shot that Pope looked to have covered all the way until it squirmed from his grasp and was gathered at the second attempt, testament to the unseen spin the finest players always put on the ball.

Recap as Sportsmail’s JEORGE BIRD for live EPL coverage of Burnley vs Man United including score, lineups and build-up.