This wasn’t quite as heart-stopping or insane as Saturday’s clash between these two teams but Manchester United will be perfectly comfortable with that.

They are through to the EFL Cup quarter finals after recording their second win over Brighton in the space of five days.

Juan Mata was the heartbeat of this comprehensive victory, setting up one before putting the finishing touch on quite exquisite team goal. 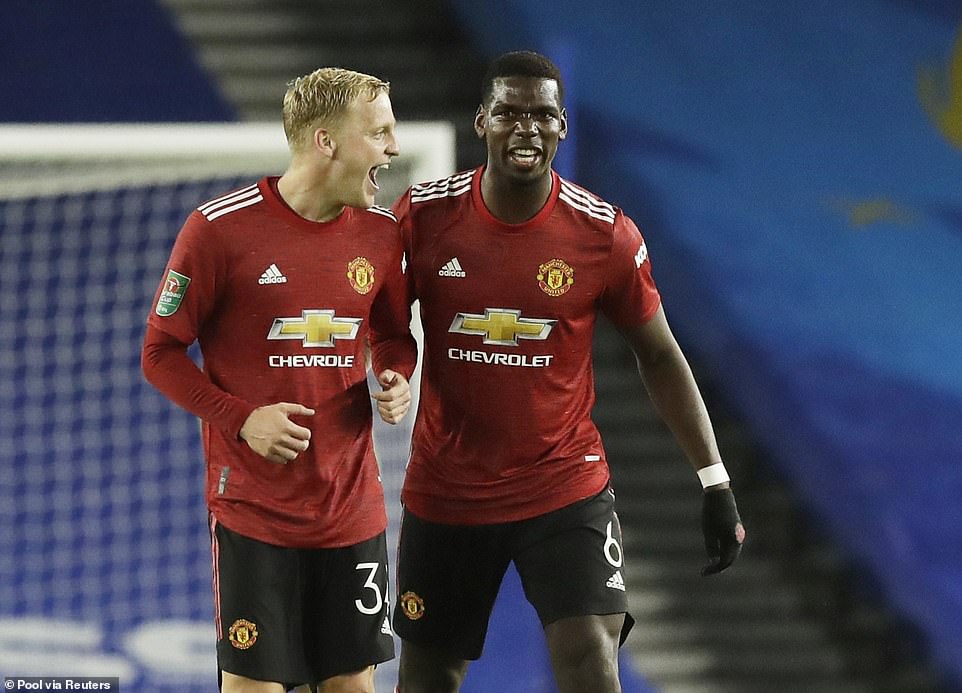 And after the madness of what took place here at the Amex on Saturday afternoon, Ole Gunnar Solsjkaer will have been happy for the easy ride last night.

It was hardly vintage United. Equally, this wasn’t a full strength United either. Nonetheless, the likes of Donny van de Beek and Eric Bailly will be better for this run out.

As will Dean Henderson, whose reputation continues to grow following a second successive clean sheet in a United shirt.

Brighton, as they always do, stuck to their guns until the dying moments. But truth be told – but for a 10 minute spell in the second half – United had this game under control from start to finish.

This was always going to have an air of after the Lord Mayor’s Show about it. After Saturday’s chaos during the Premier League encounter between these two teams – this was destined to be inferior.

Not withstanding the competition – the Carabao Cup hardly priority for either side – both managers made a total of 19 changes, Ole Gunnar Solsjkaer making 10 of those.

That meant another start for goalkeeper Dean Henderson, who is now applying genuine pressure on recognised No 1 David De Gea for the role as United’s undisputed first choice.

Not that he, or opposing goalkeeper Jason Steele, had much to do during a largely mundane opening 45 minutes that didn’t catch fire until its dying embers.

Following a tepid start, United fashioned the first opportunity, Odion Ighalo rounding Steele following Juan Mata’s pass only to fire into the side netting in the 18th minute.

Henderson comfortably completed his first save of the evening in the 26th minute, denying Alireza Jahanbakhsh’s tame effort from the edge of the box following a period of sustained pressure from Brighton.

Just after that, the heavens opened over the Amex Stadium. In truth, watching the thrashing rain lash down was about as entertaining it got during the opening 40 minutes or so.

That’s not say the clash was void of any quality whatsoever. Mata oozed class whenever he had the ball at his feet, while Lewis Dunk – as ever – was a dominant force in the heart of Brighton’s rearguard.

But make no mistake, this was a drab and dull affair. However, just as the first-half looked defined to finish goalless, Manchester United – or more precisely Mata – produced the first piece of genuine quality as the visitor’s took a 44th minute lead.

Dan Burn was rightfully booked for pulling down the Spaniard, who was by far and away the best footballer on the pitch, down the right hand-side before the United midfielder produced a peach of a free-kick to allow Scott McTominay to thump his header past Steele.

Brighton fell asleep, in particular Bernardo who let McTominay burst past him to open the scoring. Not that Solsjkaer was fussed about that.

His side were far from their best, yet they were ahead. As his team headed back down the tunnel, that was all that mattered.

The rain didn’t relent at the start of the second half. The entertainment levels didn’t improve much either.

But while Brighton certainly started the second period with more purpose, Henderson remained untested heading into the hour mark.

In truth, United were comfortable keeping Brighton at arms length – and with the likes of Paul Pogba, Marcus Rashford and Mason Greenwood on the bench Solskjaer was safe in the knowledge that he could call on the calvary if necessary.

The host’s continued to furrow down dead ends as United’s rearguard, well marshalled by Eric Bailly, nullified whatever goal threat they mustered.

But the older game drew, the more anxious United became. They only have themselves to blame for that, of course.

Having taken the lead on the stroke of half-time, surely the incentive was there to finish Brighton off.

Apparently not. Indeed, United were indebted to Henderson in the 67th minute, the keeper producing a brilliant stop to deny Leandro Trossard following dogged work on the edge of the area from Jason Molumby.

The keeper’s team-mates rushed towards their new colleague with a barrage of high-fives, the goalkeeper adding to the growing feeling that it’s a matter of when not if he overtakes De Gea.

The save proved the key moment in the game as United put their foot down on the gas to bulldoze Brighton in the closing stages.

Solskjaer had seen enough – throwing on Pogba and Rashford and the move worked a treat.

United wrapped up victory with two stunning goals: the first a sublime team effort that Mata expertly finished off in the 73rd minute as United’s nervousness subsided.

The second was a Pogba free-kick, aided by a deflection, as United strolled into the quarter-finals.

The Carabao Cup fourth round action continues on Wednesday as Brighton and Manchester United meet for the second time in four days with Graham Potter’s men looking to avoid another narrow loss.

There are four teams looking to book a spot in the quarter-finals of the competition, joining Tottenham Hotspur who saw off Chelsea on penalties on Tuesday night.

Sportsmail will provide live EFL Cup coverage of Brighton vs Man United including latest scores, lineup and build-up as well as scores from elsewhere.