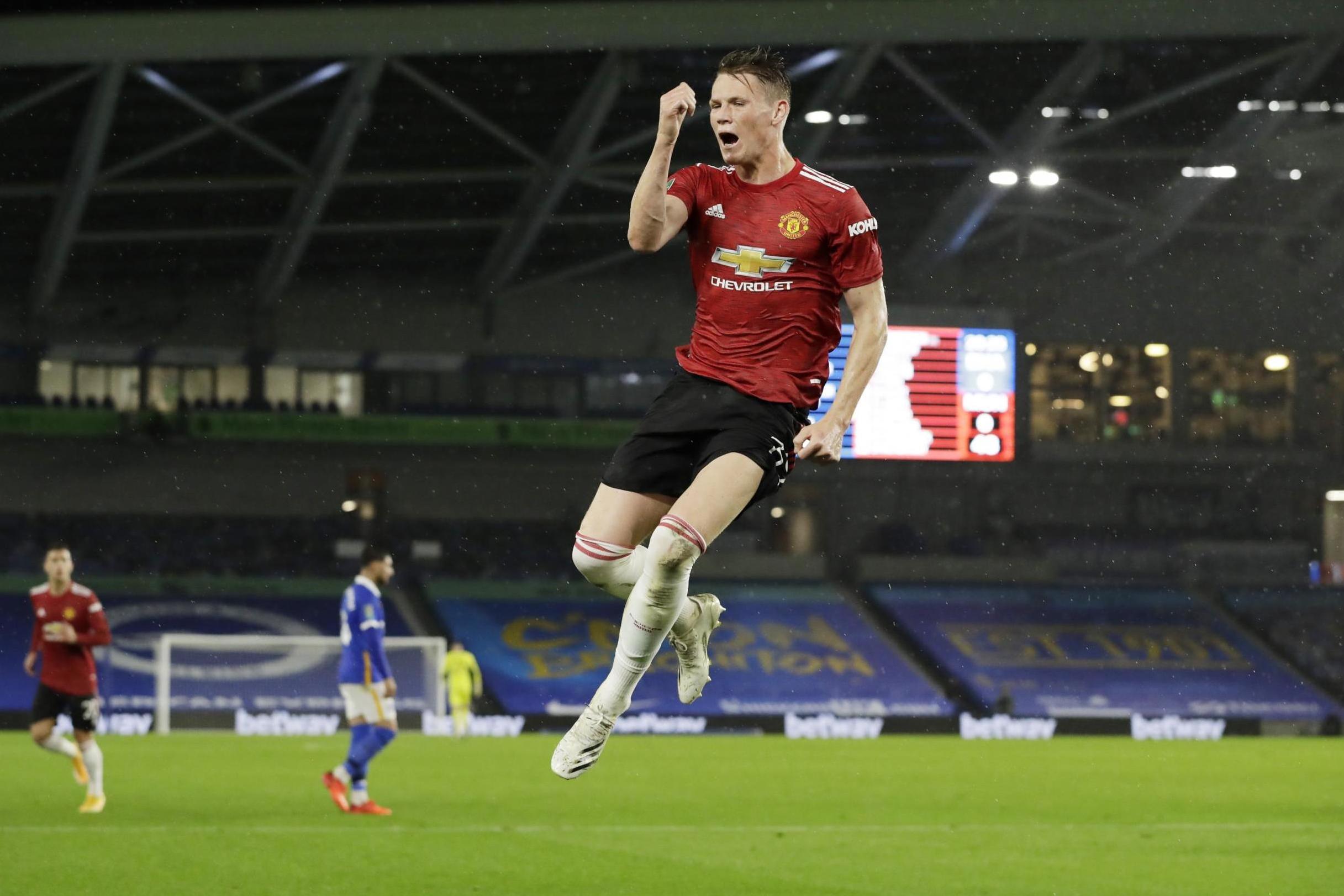 Just four days on from their dramatic Premier League encounter, these two sides lock horns once again at Amex Stadium for a place in the quarter-finals of the Carabao Cup.

The visitors needed a Bruno Fernandes penalty deep into stoppage time to snatch a 3-2 victory on the south coast on Saturday after it looked like Solly March’s goal had earned Brighton a share of the spoils.

Expect plenty of changes for this second act, with United having beaten Luton to progress this far and Brighton easing past EFL opposition in Portsmouth and Preston.

53 mins: Fred has got his eye in tonight. He forces another save from distance – this time with a free kick. Will it be third time lucky?

SECOND HALF: No changes for either team.

HALF TIME United edge a step closer to the quarter finals thanks to McTominay’s goal.

44 mins: All credit to Mata. He won the free kick and then delivers a wonderful cross that McTominay had to finish.

37 mins: Not too many openings being created. We’re still waiting for the game to take off in the manner of the one over the weekend between these sides.

United’s quality really does dip when Solskjaer takes out his first string forwards, which is hardly a surprise.

29 mins: Now Fred has a effort from range. It’s on target, but never troubling the keeper.

26 mins: Chance for Brighton as Henderson denies Jahanbakhsh from distance. Good effort, but Henderson would have been disappointed to be beaten from there.

18 mins: That was close for Ighalo. A well-worked move from United and his close range effort goes the wrong side of the post.

7 mins: United have dominated possession in the early stages, with 71 per cent of the ball – no shots yet though.

We are underway at Brighton.

Around five minutes now until official team news from the Amex. Stay tuned!

Dean Henderson is expected to start in goal for Manchester United tonight, with Eric Bailly, Fred, Scott McTominay, Donny van de Beek and Jesse Lingard all likely to be involved.

Solskjaer added: “You can look back at the performance especially in the last 20-25 minutes when we didn’t really get hold of the ball and control the game when we were winning 2-1.

“But then again it’s three points – the reaction after conceding was fantastic and there are some positives. We’ve got to be happy. I don’t think too many teams will have a comfortable ride down there.”

Ole Gunnar Solskjaer has suggested he will have to split his Manchester United squad into two teams to cope with the hectic fixture schedule this season.

United face Brighton in the EFL Cup on Wednesday after Saturday’s dramatic 3-2 win against the same opponents.

But Solskjaer will field a much-changed side as he tries to manage the condition of his players.

“Every game lives its own life and of course at the stage we’re at in the season with all the games coming up I think teams are making changes,” he said.

“You can see teams have a cup team and a league team and we’ll make changes. It’ll be very similar to what happened last week against Luton.

“At the stage we’re at we need to have players ready and available because it’s a long season. But we have a strong and a big squad.”

Hello and welcome to Standard Sport’s LIVE coverage of the Carabao Cup tie between Brighton and Manchester United!

Brighton vs Manchester United is scheduled for a 7:45pm BST kick-off tonight.

This match will be played behind closed doors at Amex Stadium with no fans due to be present due to government guidelines regarding coronavirus.

TV channel: The match will be shown live on Sky Sports’ Premier League and Main Event channels, and is available via Now TV.

A calmer affair than we saw at the weekend, United will be hopeful their deeper squad options can see them through another test.

Solskjaer had to call upon Marcus Rashford and Mason Greenwood to apply the finishing touches against Luton – their assistance might be required again.