Alexis Sanchez launched a stinging attack on Manchester United and his critics this week after ending his two-year nightmare at Old Trafford.

The Chilean has escaped to Inter Milan after struggling to produce for the Red Devils despite arriving on wages of £350,000 per week but in an explosive video on his Instagram account, he hit back at former players who ‘damaged’ him with their heavy criticism.

Sanchez opened up on his hellish experience after swapping north London for Manchester in 2018, claiming he wanted to rip up his contract after just one training session and head back to Arsenal. 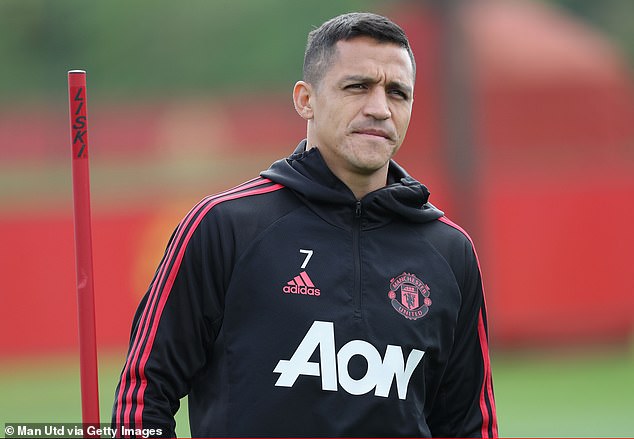 The midfielder was backed to become a superstar for United after some starring performances as Arsenal’s talisman, but he only scored five goals in 45 appearances and was often singled out by pundits as he failed to recapture his best form.

But he said many of them spoke without any knowledge of what was going on behind the scenes.

‘Former players spoke who had no idea of ​​anything that was happening inside the club and gave their opinion damaging you, that it was your fault,’ he said.

Sportsmail has analysed what some of the top football pundits had to say about Sanchez during his time with Manchester United.

Sanchez hadn’t been at United long before receiving his first piece of criticism, as Graeme Souness laid into him after his performance against Chelsea in February 2018.

United won 2-1 against the Blues but Sanchez had no significant impact on the game, with his only previous goal coming from the penalty spot in a game against Huddersfield.

But already his lack of presence was starting to show on the pitch and Souness said he was ‘absent’ during the game, and admitted he struggles to see his influence. 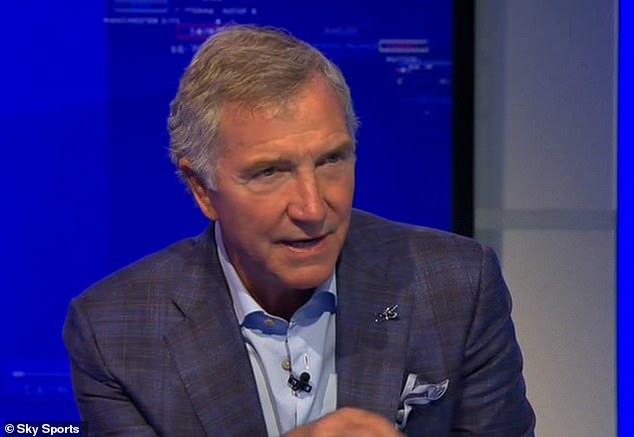 ‘His career hasn’t got going at United yet,’ he said.

‘Every time I watch him, I think “where are you” – when he was at Arsenal he was the difference.

‘Today he was absent. I can’t think of a single thing he did in the game.’

The following month Sanchez had another game to forget against Crystal Palace, but instead of just being anonymous, he was downright sloppy.

The former Barcelona man lost possession of the ball 19 times in the first half as United found themselves 2-0 down, with his lack of focus costing the team dearly.

His team-mate Paul Pogba had been another high-profile star coming in for stick but Carragher insisted Sanchez was performing worse and said it was clear that the player was unsure of his positioning.

‘You started looking at sloppy Manchester United and how poor they’ve been in possession,’ he said on Sky Sports. ‘You’ve mentioned Pogba; I think Sanchez has been worse. 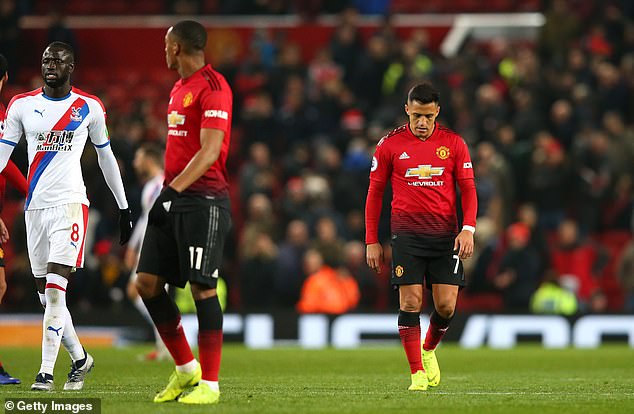 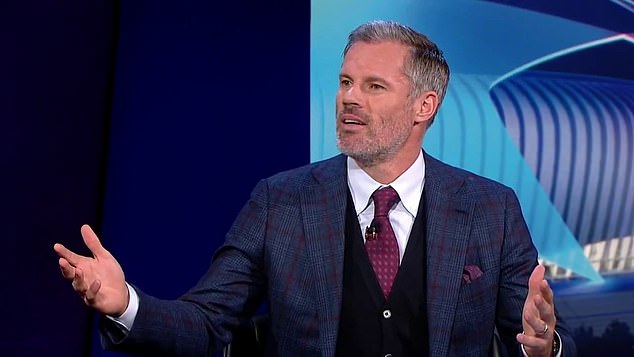 ‘Sanchez has lost the ball 19 times in that first half. That’s unbelievable.

‘We’re talking about a supposed world-class player. He has shown that in the Premier League. But it feels like I don’t know where he’s playing, he just pops up everywhere.

‘It’s like him and Pogba are like two kids in the schoolyard, “We’re the best players, we’ll go wherever we want”.’

Despite his woeful display, Sanchez still managed to stay on the pitch for the full 90 minutes as Jose Mourinho’s side came from behind at Selhurst Park to win 3-2.

The former United centre-back admitted he felt sorry for Sanchez after watching him struggle through the club’s 2-1 defeat to Sevilla in the Champions League last-16 in 2018.

The entire squad had come up short in a disappointing defeat but Ferdinand couldn’t help but notice how marginalised the Chilean looked on the pitch and described him as looking like ‘a stranger’. 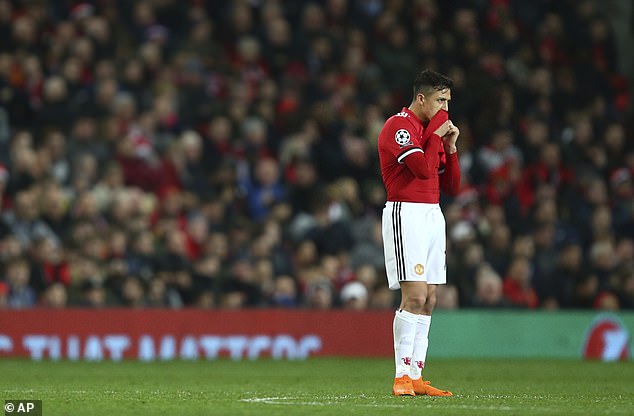 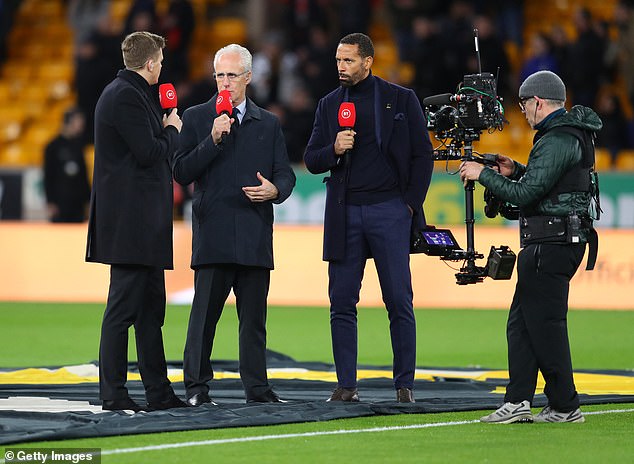 He noted his fall from grace after being the go-to player at the Emirates and the star that the Gunners wanted to build the team around, and was shocked to see his talent going to waste.

‘Sanchez looks like a shadow of his former self,’ the pundit told BT Sport after the game. ‘When he was at Arsenal he was a player everyone looked to for inspiration.

‘Here he just looks like a stranger in this team. When you go to a [new] team you don’t lose all of your talent, it’s still there.

‘In some ways I feel sorry for him but it just isn’t going for him.’

Unlike Neville, the former United midfielder is never afraid to speak his mind and had no problems calling out Sanchez in October 2018 – calling him ‘selfish’ and not a player in the Manchester United mould.

‘I know he has qualities and has been a good player but I never saw him as a United player,’ he told ESPN.

‘I saw him as a bit selfish, someone who played for himself sometimes. I didn’t think he was a player that we needed, especially for that type of money.’ 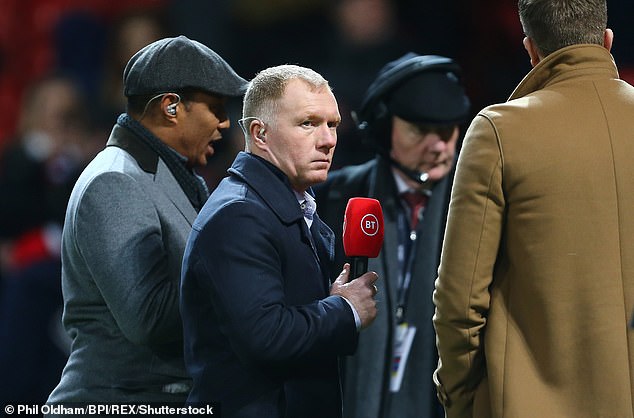 Scholes was one of the greatest midfielders in United’s history so he will hold the bar very high for future stars at the club. He also claimed Sanchez was only signed from Arsenal to stop rivals Manchester City getting their hands on him.

‘How would we be able to get rid of him now when he earns those wages?’ he added. ‘The signing felt like it happened just to stop Man City signing him.

‘It feels like every player who comes into the team struggles. I feel like we could sign Lionel Messi at the moment and he’d struggle in this team.’

In February 2019, Manchester United were up against PSG in the Champions League last-16 and were seeking inspiration with the scores 0-0 at half-time in the game at Old Trafford.

Ole Gunnar Solskjaer threw on Sanchez in the hopes he could offer some magic to get the team going, but was yet again a frustrating presence as the team went on to lose 2-0 to the Parisiens.

And Sanchez’s failure to get United ticking drew fury from another former Red Devils star in Paul Ince. 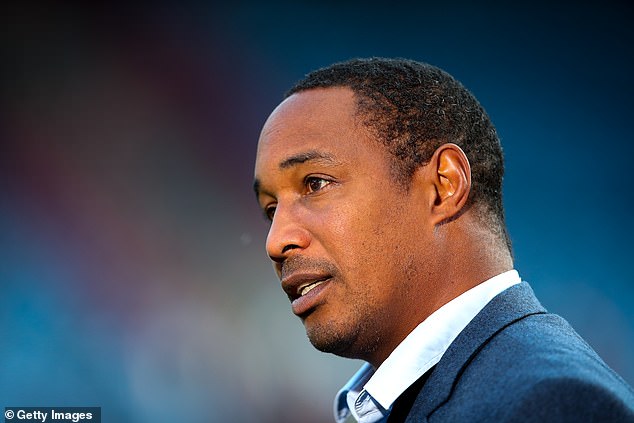 The ex-midfielder called him a ‘disgrace’ after the game and said his performances were a ‘joke’ considering his eye-watering salary – calling him ‘hopeless’.

‘The way Alexis Sanchez is playing at the moment is nothing short of a disgrace. His performances are a joke for the wage he gets.

‘I wouldn’t begrudge his high wage, either, if I thought that he was truly putting his all in and playing well, but when you give someone that kind of money you expect a lot more. 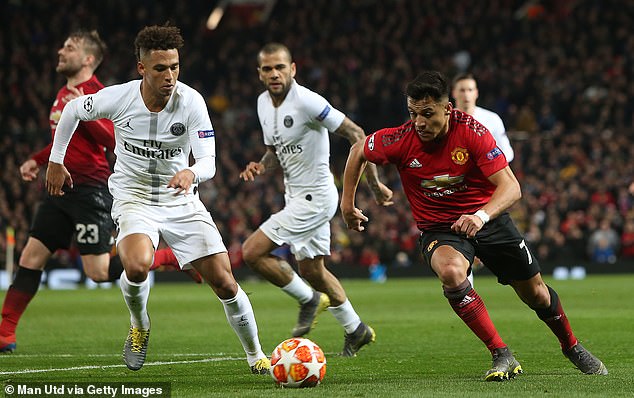 ‘The fans deserve better, Ole deserves better, and so do the rest of his team.

‘Maybe he has the hump because he’s not in the starting XI, but that’s hardly a surprise! He’s been hopeless, completely all over the place.

‘He’s a million miles away from being at his best, he looks like a completely different player.’

The Sky Sports pundit often gives a balanced assessment on players, but he was particularly scathing of Sanchez after an anonymous display against Huddersfield Town in May 2019.

Sanchez was starting his first game since March but failed to inspire the team as they drew 1-1, with Ole Gunnar Solskjaer hooking him for teenager Tahith Chong after just 54 minutes.

Neville said United fans were ‘still waiting for him to turn up’ after more than a year of underwhelming displays and said he had ‘nothing left’ to offer. 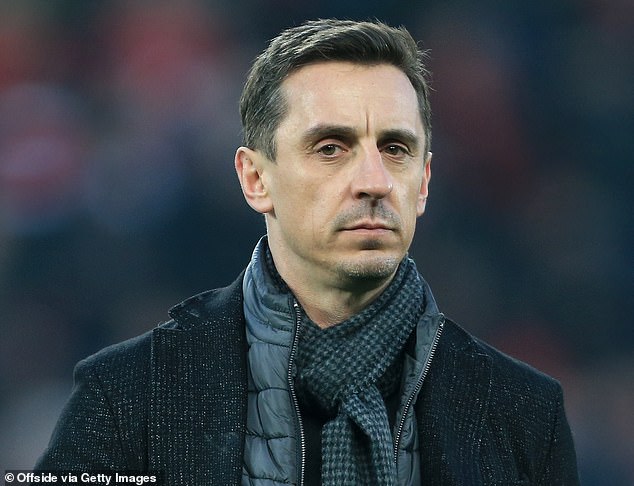 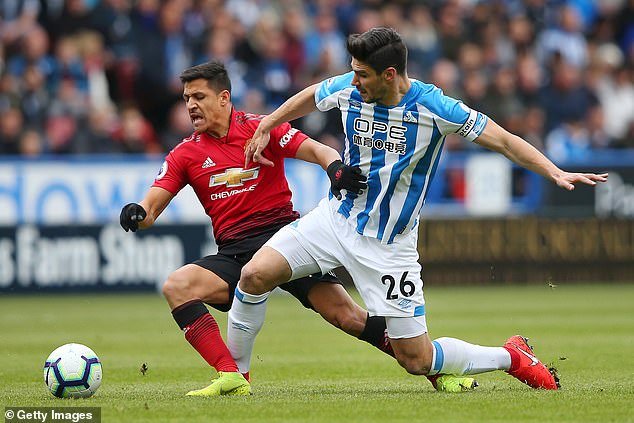 ‘I don’t know if anyone can put any science or sense behind what has happened to him. It’s as if one the most tenacious football player you will ever see with and without the ball has lost absolutely everything.

‘That’s from confidence, to his energy, to his legs, to his dribbling abilities, to his goals. There is nothing left in Alexis Sanchez at all. And we are still waiting for him to turn up.’